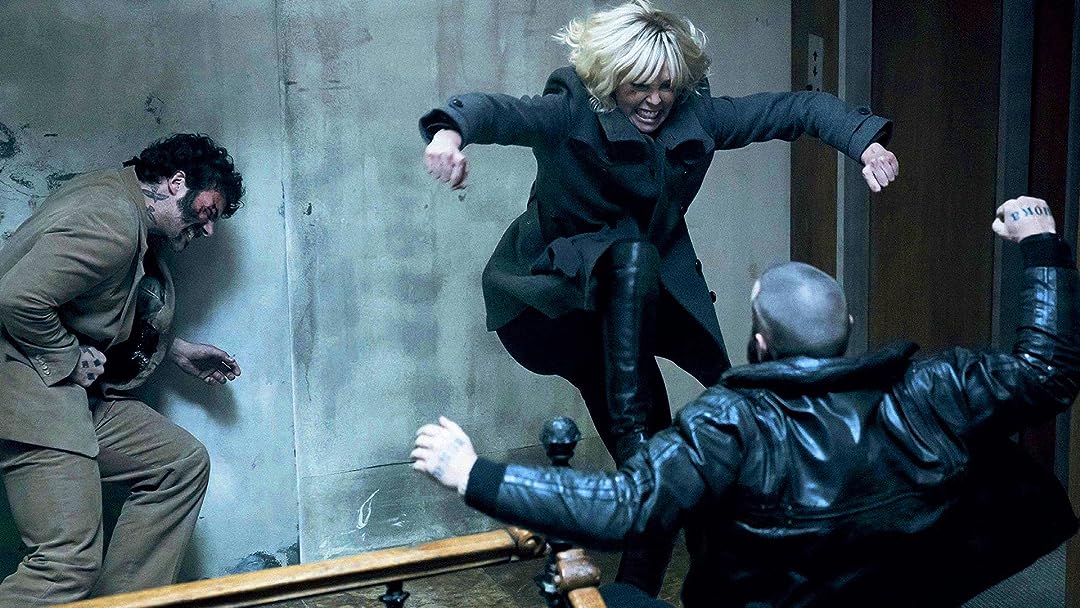 (12,171)6.72017X-RayR
Charlize Theron stars as a secret agent who gets double-crossed as she attempts to escape out of Berlin with a priceless dossier in this breakneck action-thriller.

Luke ClarkComentarios de Estados Unidos el 7 de enero de 2018
5.0 de 5 estrellas
When my wife suggested that wewatch this I was relieved because I wanted to
Compra verificada
When my wife suggested that we watch this I was relieved because I wanted to watch it but was worried that I would find it enjoyable midway through the movie. With her suggestion, I felt there were good odds that at least one of us would like it and we both ended up loving it! I feel like the studio must not have marketed this movie up to its potential because I was blown away by how perfectly the late 80s atmosphere was captured. It felt and sounded like an 80s movie, but the visuals were definitely modern. There were so many scenes were it seemed like things were shot with minimal cuts involved. I would highly recommend this movie to anyone who enjoys action, intrigue, collapsing walls, neon, and perfectly timed 80s music.
A 86 personas les pareció útil

Mike Billington author of Murder in the Rainy SeasonComentarios de Estados Unidos el 22 de junio de 2018
5.0 de 5 estrellas
A high-octane spy thriller
Compra verificada
Charlize Theron can throw a mean punch.
I mention that because there are many actors - male and female - who cannot make a fight scene look realistic. The reason: Physical combat is ferocious and to make a fight scene appear realistic the actor must bring that sense of ferocity to it. He or she must convey to the audience that this is not simply a well-choreographed dance with a punch or two thrown in for good measure but is, instead, a battle for life itself.
Theron brings that sense of ferocity to the screen time and again in "Atomic Blonde."
That's one of the reasons why I think this spy thriller is a 5-star film.
There are other reasons, of course, starting with the fact that it takes place at a pivotal moment in world history - the collapse of the Soviet empire - in what was once the hub of the Cold War - Berlin. The cinematography wonderfully captures the edgy mood of that city at that particular moment in time when the world's eyes were on the protests that would eventually lead to the dismantling of the Berlin Wall.
The plot is convoluted and I recognize that there are people who do not like that. They would prefer what you might call a "John Wayne Western" plot - good guys against bad guys in a straightforward storyline. After spending nearly 50 years as a journalist - much of that time overseas - I can say, however, that the world seldom works like that. There are hidden agendas in almost every action taken by governments and the men and women they employ. There are double crosses, outright lies, betrayals both personal and professional, and subtle manipulations of facts and events.
"Atomic Blonde" illustrates those truths very well.
The acting is top notch. James McAvoy, as the British station chief in Berlin, is superb. John Goodman as a CIA official, who likely knows more than he admits, is well suited for his role, and Theron is brilliant as the British spy sent to bring a defector with valuable information to London.
The verdict: This is a high-octane spy thriller with plenty of action and some really fine acting by men and women who know their craft. It's a movie I have no hesitation recommending to family and friends.

cancerComentarios de Estados Unidos el 26 de noviembre de 2017
5.0 de 5 estrellas
The Real Title Should be Called Revenge on Weinstein-Ball Kicking Galore
Compra verificada
The film for anyone who wants to see a real action hero as a woman, no Charlie's Angels here, but a bad ase among the baddest. Ms. Theron does all of her own stunts and has the abrasions to prove it. The fimn features Berlin pre-unification with the GDR, which is a nice little historical romp. Some great car scenes, amazing fights, and interrrogations. No one holds a candle to Theron in the film. Fantastic to see an action movie where the female role is not limited to seduction.
A 58 personas les pareció útil

sixthreezyComentarios de Estados Unidos el 25 de noviembre de 2018
5.0 de 5 estrellas
Atomic Blonde is the BOMB! in 4K
Compra verificada
I picked this up as a new 4K owner, and so far it is my favorite in the collection. When the movie came out, a lot of the trailers had a vibe that screamed John Wick, and come to find out it's directed by the same guy... so that makes a lot of sense now. I discounted it as a female John Wick knockoff while it was in theaters and never really intended to watch it. I decided to give it a shot considering I had recently seen Charlize Theron in an interview on Hot Ones and remembered how entertaining of an actor she can be. And wow, I was decently surprised at how good this movie really is.

This movie is definitely a great one to watch in 4K with the 80's infusion of music and lighting. Lorraine's room is probably one of the best environments of the movie because of the hot & cold neon lighting that really plays well in the scenes, but looks phenomenal. There are a few bar scenes that also really capitalize from being in 4K just due to lighting and the music, one in particular in a restroom that just really pops color-wise.

The soundtrack is a mixture of 80's music and a score composed by Tyler Bates who is one of the leading names right now for modern movie scores. I'm really not one for 80's music but all of the drops fit pretty well with the scenes, and in a few of them they play along with the scene perfectly. The score is also well used throughout and is peppered in to create some dramatic moments that really pay off.

The extras are where this movie really shined because it allowed me to watch the film again with director's commentary. Surprisingly, the movie isn't all about the action despite being heavily advertised as such. The director really had a larger vision for the movie and explains a lot of the detail that I missed the first time around. Also, giving the movie more context and why things ended up the way they were really made me appreciate the movie that much more.

For a Cold War spy thriller, it's pretty heavy on the action with a spectacular "one-er" towards the end of the film that really caps the whole thing off. The tension built throughout the movie's multiple twists and turns really close with a bang at the end of the movie, and they even go one step further to give this movie a potential future with sequels or additional stories. I'm highly interested in the novel that this was based off of now, though it is clearly not going to have as much action as this. It's not comparable to John Wick as an action movie, but aesthetically and emotionally it's right on par I'd say.

Atomic Blonde was a huge surprise and I highly recommend it for fans of action, spy flicks, and just generally good movies. I also really recommend watching the director's commentary if you enjoy the film. One of my best 4K purchases thus far. Slipcover came in great condition, no terrible stickers on the product. Both 4K & Blu-ray physical copies included inside w/ digital copy insert.
A 15 personas les pareció útil

Frank CastleComentarios de Estados Unidos el 21 de diciembre de 2017
3.0 de 5 estrellas
All style and very little substance.
Compra verificada
If Charlize Theron is in a film, I will be watching the film. Her acting and physical dedication to the fight scenes are on point. Theron always brings her best to a role however the story made me almost fall asleep at certain points and James McAvoy was funny but not funny enough to save this film. All style and very little substance.
A 24 personas les pareció útil

Brian Lee Gnad (The Bubba Man)Comentarios de Estados Unidos el 7 de noviembre de 2017
5.0 de 5 estrellas
Great Old School Throwback!
Compra verificada
This is set in the Reagan Era at the end of the cold war as the Berlin Wall comes down.
It does a great job of capturing that era, with all the grit and the glitz and tudes.

Action Packed!
And the action is very realistic and the damage that comes from that kind of action is shown well. They do a good job portraying that. The heros get the crap kicked out of them and keep on fighting.

They managed to surprise me a couple of times without breaking the flow.

The first thing of note about the film is that all the action scenes were realistic. That meant one punch didn’t knock someone out. One bullet didn’t kill someone. Instead, when Broughton got into fights they lasted for quite some time as she and her opponent beat the hell out of each other. Plus you could see the aftermath with bruises, black eyes, etc. In the second scene for instance, Broughton is sitting in a tub full of ice with a black eye and multiple cuts which she bandages up after completing a mission. That made for some thrilling action scenes, and was a refreshing script decision.

Second, since the movie takes place in the 1980s the soundtrack is chock full of 80s pop hits by the likes of David Bowie, Nena, George Michael, A Flock of Seagulls, and others.

Third, you can tell the movie is about betrayal right from the start. Broughton is assigned to bring Spyglass out and as soon as she lands in West Germany she’s made by the Communists and almost gets killed. There would be many more double crossing as the movie progressed as one lie was built upon another which really threw off the viewer until the very end.

Overall, this is a top notch action movie and it’s also nice to see a woman in the lead. The realism in the fight scenes made it a thrill, and the music was an added bonus.
C
A 2 personas les pareció útil