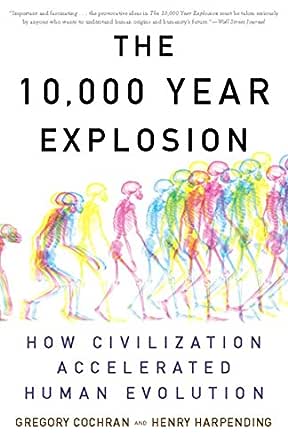 Flip to back Flip to front
Audible Sample Playing... Paused   You are listening to a sample of the Audible narration for this Kindle book.
Learn more
ISBN-13: 978-0465002214
ISBN-10: 0465002218
Why is ISBN important?
ISBN
This bar-code number lets you verify that you're getting exactly the right version or edition of a book. The 13-digit and 10-digit formats both work.

Arguing that human genetic evolution is still ongoing, physicist-turned-evolutionary biologist Cochran and anthropologist Harpending marshal evidence for dramatic genetic change in the (geologically) recent past, particularly since the invention of agriculture. Unfortunately, much of their argument-including the origin of modern humans, agriculture, and Indo-Europeans-tends to neglect archaeological and geological evidence; readers should keep in mind that assumed time frames, like the age of the human species, are minimums at best and serious underestimates at worst. That said, there is much here to recommend, including the authors' unique approach to the question of modern human-Neanderthal interbreeding, and their discussion of the genetic pressures on Ashkenazi Jews over the past 1,000 years, both based solidly in fact. They also provide clear explanations for tricky concepts like gene flow and haplotypes, and their arguments are intriguing throughout. Though lapses in their case won't be obvious to the untrained eye, it's clear that this lively, informative text is not meant to deceive (abundant references and a glossary also help) but to provoke thought, debate and possibly wonder.
Copyright © Reed Business Information, a division of Reed Elsevier Inc. All rights reserved. --This text refers to an alternate kindle_edition edition.

Cochran and Harpending dispute the late Stephen Jay Gould’s assertion that civilization was “built with the same body and brain” Homo sapiens has had for 40,000 years. Humanity has been evolving very dramatically for the last 10,000 years, they say, spurred by the very civilizational forces launched by that evolution. They initially retreat, however, to Gould’s 40,000-year benchmark to consider how H. sapiens replaced H. neanderthalensis and to argue for genetic mixing such that modern humans got from Neanderthals the innovative capacity for civilization. Later, agricultural life created problems necessitating adaptations, most importantly to disease and diet, that persist to this day among inheritors of the populations that made them. Lighter skin and eye color arose from other genetic reactions to environmental challenges, and less immediately obvious changes further discriminated discrete populations, as recently as late-eighteenth-century Ashkenazi Jews, among whom intelligence burgeoned in, Cochran and Harpending contend, adaptive response to social pressure. A most intriguing deposition, without a trace of ethnic or racial advocacy, though directed against the proposition that “we’re all the same.” --Ray Olson --This text refers to an alternate kindle_edition edition.

Gregory Cochran is a physicist and Adjunct Professor of Anthropology at the University of Utah. For many years, he worked on lasers and image enhancement in the field of aerospace. He lives in Albuquerque, New Mexico.

Henry Harpending holds the Thomas Chair as Distinguished Professor in the Department of Anthropology at the University of Utah. He is a member of the National Academy of Sciences. A field anthropologist and population geneticist, he helped develop the "Out of Africa" theory of human origins. He lives in Salt Lake City, Utah.

Publishers Weekly
“There is much here to recommend…and their arguments are intriguing throughout…it's clear that this lively, informative text is not meant to deceive (abundant references and a glossary also help) but to provoke thought, debate and possibly wonder.”

Wall Street Journal
“Important and fascinating…the provocative ideas in The 10,000 Year Explosion must be taken seriously by anyone who wants to understand human origins and humanity's future.”

Seed
“The 10,000 Year Explosion would be important even if it were only about population genetics and evolutionary biology, but Gregory Cochran and Henry Harpending…have written something more. This book is a manifesto for and an example of a new kind of history, a biological history, and not just of the prehistoric era.”

New Scientist
“The evidence the authors present builds an overwhelming case that natural selection has recently acted strongly on us and may be continuing unabated.”

John Derbyshire, author of Prime Obsession
"Did human evolution come to a screeching halt fifty thousand years ago when Homo sapiens emerged from Africa, thus ensuring the psychic unity of mankind? Don't be silly, say the authors of this latest addition to the fast-emerging discipline of Biohistory. In clear prose backed by a wealth of hard data, Cochran and Harpending add a biological dimension to the history of our species, and hammer another nail into the coffin lid of 'nothing but culture' anthropology."

Bruce G. Charlton, MD; Professor of Theoretical Medicine, University of Buckingham, Editor in Chief of Medical Hypotheses
“The 10,000 Year Explosion offers scientists and historians a new and fertile direction for future research, and provides the general public with a better explanation of the past, present, and future of human beings.... I was motivated to read the entire book in a single marathon session.”

John Hawks, author of Human Evolution
“For years, human geneticists have been uncovering a picture of human evolution. But now, Gregory Cochran and Henry Harpending are encouraging us to 'fast forward' the discussion."

Booklist
“A most intriguing deposition, without a trace of ethnic or racial advocacy, though directed against the proposition that ‘we're all the same.'" --This text refers to the paperback edition.