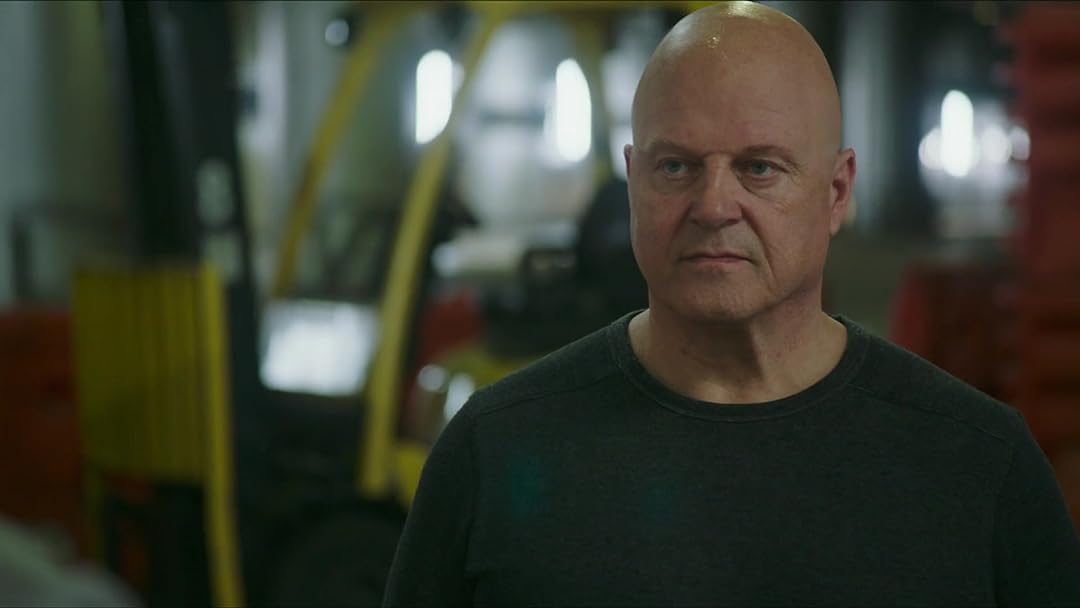 (954)
3.61 h 28 min2019X-RayHDRR
In this gripping thriller starring Bruce Willis, a safecracker (Michael Chiklis) wakes up from a traumatic head injury after a heist gone wrong and must find the traitor who set him up.

TollyReviewed in the United States on October 31, 2019
1.0 out of 5 stars
This movie is a complete disaster and Meadow Williams is to blame!!
Verified purchase
Who is Meadow Williams? Nobody you know and that's the main point! She is a D-list actor who isn't fit to be cast in a swiffer commercial, let alone a movie. She takes the lead female role (Clair) and tries to pass herself off as a twenty-something bar maid who is romantically involved with one of the bank robbers. There's only one problem, she is 53 and her plastic face is about to explode from Botox injections. Meadow Williams inherited 800 million dollars from her late hubby Gerald Kessler and that included his reputable production company. She and her 28 year-old boy friend (Swen Temmel) now make movies and cast themselves in lead parts. This movie could have been decent, but she had to be in it. I tried to ignore her bad acting and awkward appearance, but I just couldn't finish the movie!! The action scenes were very low budget and the stunt men needed lesson on how to fall down. 300 rounds of ammunition and not one broken car window? C'mon guys!!
106 people found this helpful

PaulReviewed in the United States on October 26, 2019
2.0 out of 5 stars
Underwhelming is generous
Verified purchase
I came into this with high hopes. Die Hard is my favorite motion picture of all time. The Shield was, imo, the best television show of all time. The two stars of those respective productions are in this movie - so it has to be good, right? The production value and performances were so tight in each. Those were tim s of real screen magic, the synergy of solid writing, superb direction, skilled actors, and good editing.

There were a number of red flags as soon as the logos started popping at the start of the movie. Too many production companies involved, including Moviepass(?!?).

Then Bruce Willis came in with what is, hands down, the most rigid and unbeliveable dialogue delivery he has probably ever done. Everybody in that scene looked like they had ten sticks in their butts, they were so rigid and not humanlike that the dialogue was a chore to try and follow.

Texas Battle kind of reminds me of Anthony Anderson, which seemed great at first, but then I realized that he looks super uncomfortable in all of his scenes, like he doesn't know where to look or how to stand and is super self conscious about it.

The bank heist was super hokey. They guys with guns were clearly not super knowledgeable about how to do tactical stuff and came off looking like goobers in tacticool ninja suits.

The producers and editors, although I will admit were dealt a pretty weak hand in terms of script, botched this movie so hard. There is very little flow to any of the dialogue. The plot is so thin. There were some moments of decent gun action w/ Chiklis, and they actually reloaded, but even that was ruined when one of Michael Chiklis' enemies clearly had to check his mag orientation twice before inserting it.

I have been waiting a decade for the return of a character that even showed fleeting glimpses of the greatness of Vic Mackey and three decades for Nakatomi John McClane. It sasdens me to realize that thoae performances were extraordinary a d we'll probably never see anything on that level again.

Kelly JohnsonReviewed in the United States on February 9, 2020
1.0 out of 5 stars
No, believe the critics, this movie is LAME
Verified purchase
Bruce Willis has made some terrific action films, this is not one of them. The initial gunfight is not anywhere close to realistic, and the attempt to make it seem like great action by shaking the camera makes it even worse. The blood on a victim's white shirt looks like some kind of strange purplish red soft drink. Even Bruce doesn't look like he believes what he is saying when he talks. Don't waste your time.
34 people found this helpful

Terri MoneysmithReviewed in the United States on November 4, 2019
1.0 out of 5 stars
Don't
Verified purchase
It sounded like a decent plot O M G I was insulted that they threw Bruce Willis in the mix just to get you to think that this was a Bruce Movie IT IS NOT I had to fast forward 2/3 of it and mute more than half. They tried to make a shoot 'em up thriller. FAIL !!! And Bruce phoned it in without pretense. He should be ashamed. I wasted my time and Money, don't you.
25 people found this helpful

Avg JoeReviewed in the United States on January 26, 2020
2.0 out of 5 stars
The direction is so bad it takes you right out of the movie.
Verified purchase
Stellar actors delivering lines like a first read of the script. Its subtle at first then it starts to sould like a highschool play. Willis, Chickless, etc. The delivery is aweful and only a director can take that much talent and wreck it. I had to stop watching 30 minutes in. The plot was excellent, the writing.... meh. But the acting... so very bad. Director probably never took more than one take on any given scene. No one sounded right here.
20 people found this helpful

Silver Screen VideosReviewed in the United States on March 31, 2020
1.0 out of 5 stars
88 MInutes Gone Forever for the Audience
Verified purchase
When you see the name and picture of Bruce Willis prominently featured on the poster of an action movie that goes straight to video, you can be pretty sure of two things. First, you won’t see much of Willis in the actual film, and, second, the movie is headed straight to the toilet. In recent years, Willis, who rarely gets cast in major studio projects nowadays, has made a living lending his name and a few minutes of his time to any producer willing to write a check. That’s certainly the case with “10 Minutes Gone,” a so-called heist thriller that proves extremely short on thrills.

In “10 Minutes Gone,” Willis plays a criminal master planner who recruits a supposed top-notch group of thieves for a bank robbery in Cincinnati. The gang includes Michael Chiklis, the real star of the film, and his brother. While the other gang members are threatening customers in the bank’s lobby, Chiklis and his brother break into the vault and steal a safety deposit box that viewers later learn contains a fortune in stolen diamonds. Unfortunately, when Chiklis and his brother escape out of the bank’s back entrance, all the alarms go off, and the crooks in the front of the bank wind up in a big shootout with arriving cops. In the meantime, Chiklis gets clunked on the head by a mysterious assailant. When he wakes up, ten minutes later (hence, the film’s title), his brother is dead, and the box of diamonds is gone. Figuring that one of his fellow thieves set him up, Chiklis spends the rest of the film tracking down the remaining gang members. And, as he asks them about the missing box, the body count starts to rise.

The above synopsis might make someone think that “10 Minutes Gone” is an exciting action thriller. It’s not. The movie has plenty of action, but it comprises mostly poorly staged scenes in which director Brian A Miller alternates between shots of the crooks firing dozens of shots at offscreen cops and cops shooting dozens of shots at offscreen crooks. I would guess that whatever money there was left in the film’s budget after paying Willis and Chiklis went to buy the thousands of blanks used in the movie’s various shootouts. “10 Minutes Gone” is one of those films in which crooks and cops have magic guns that can fire hundreds of rounds without either having to reload or hitting any targets. Even worse, the movie features two subsequent flashbacks in which large segments of the shootout are repeated for no reason other than to fill up screen time.

Most of Willis’s scenes take place in an empty upper floor of a building under construction (I guess so the producers could save money on actual set design). There, he strategizes with the members of his team that aren’t in the bank. Willis doesn’t get much for all the alleged top-flight talent he has recruited, either in terms of actual criminal expertise or acting ability. The robbery shows about the same degree of careful planning as stickups on old “Dragnet” episodes did. Further, the members of the supporting acting ensemble of virtual unknowns deliver some painfully wooden performances, as if they were having trouble remembering every single line. To his credit, Chiklis seems invested in his performance, but Willis seems bored most of the time.

There is an actual big bad in “10 Minutes Gone,” whose identity is ridiculously easy to figure out in about, say, ten minutes. Nevertheless, director Miller provides an overly talky, confusing, flashback-filled explanation at the end for why the robbery went sour and the jewels disappeared. The only thing that accomplishes is to make the final showdown even less interesting. Needless to say, anyone making an effort to think through the movie’s entire plot will realize how little sense it makes.

Michael Chiklis does make an effort in “10 Minutes Gone,” and he’s always an entertaining actor to watch. For that reason, I would give this movie a 1.5-star rating. Based on the completely ridiculous ending, however, I’m lowering it to one star. The only positive about “10 Minutes Gone” is that the constant noise level in the film will likely keep viewers awake who might otherwise doze off. Sadly, watching “10 Minutes Gone” will result in 88 minutes gone for good for the viewing audience.
10 people found this helpful

StevoReviewed in the United States on November 4, 2019
1.0 out of 5 stars
This would have been better if it was staring Bruce Willis, Bruce Willis and Bruce Willis.
Verified purchase
Yeah so the most interesting part of this movie was trying to figure out which city they were in, and even that turned out to be be disappointing.
This is not a Bruce Willis movie, this feels like someone made such a crap movie and then afterwards put some Bruce scenes in. Good for Bruce but bad for us.
Pretty bad acting and a pretty boring story line.
16 people found this helpful

Noah NattressReviewed in the United States on October 3, 2019
5.0 out of 5 stars
Don't listen to the critics!! Michael Chiklis and Bruce Willis deliver a powerhouse action flick!!
Verified purchase
Most of us know Michael Chiklis as Vic Mackey in The Shield, and Bruce Willis on the other hand, the Die Hard franchise and just about every action movie with his name. I just loved the chemistry and incredible acting between these two, especially Chiklis. Since The Shield is my favorite show of all time, this was a real treat for me. To see Michael Chiklis and Bruce Willis in a bank heist/action film together was the most fun I've seen in the movies all year right up to Rambo: Last Blood. If you're a fan of Chiklis and The Shield and especially Bruce Willis, despite the short amount of screen time he has in the movie, you won't be disappointed! Go out and see Ten Minutes Gone now!!
14 people found this helpful
See all reviews
Back to top
Get to Know Us
Make Money with Us
Amazon Payment Products
Let Us Help You
EnglishChoose a language for shopping. United StatesChoose a country/region for shopping.
© 1996-2022, Amazon.com, Inc. or its affiliates