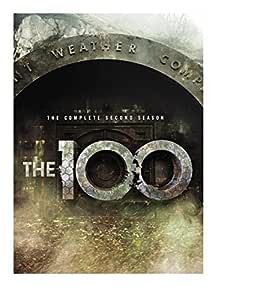 The 100: The Complete Second Season (DVD)

Set almost 100 years after mankind nearly destroyed itself in a nuclear Armageddon, the surviving human race aboard the orbiting “Ark” space station take the first step to recolonize Earth, by sending 100 juvenile delinquents back to the planet’s surface to see if it is habitable. In the first season, they discovered that the Earth is not quite what they imagined – and that they were not alone. Survivors from the nuclear apocalypse have broken into dangerous factions including The Grounders, Reapers and Mountain Men. The first season finale found all of the survivors of the Ark attempting to return to the surface, while The 100 fought for their lives against the Grounders. In Season Two, Clarke and Monty have been captured by the Mountain Men and are being held inside Mt. Weather, but the fate of everyone else is unclear.

4.6 out of 5 stars
4.6 out of 5
454 global ratings
How are ratings calculated?
To calculate the overall star rating and percentage breakdown by star, we don’t use a simple average. Instead, our system considers things like how recent a review is and if the reviewer bought the item on Amazon. It also analyzes reviews to verify trustworthiness.

Cyril J. Martinez
5.0 out of 5 stars One of the best shows on TV not enough people know about.
Reviewed in the United States on April 4, 2018
Verified Purchase
This show just keeps getting better and better.
Sadly the ratings have not been very high for this futuristic thriller I think partly because it is shown on the CW Network, the smallest of the four over the air networks.
The story continues from season 1 of a group of young adults sent back to Earth after living on a space station all of their lives with their parents to escape a nuclear holocaust on Earth.
With supplies dwindling the elders decide to send the younger generation back to earth that they hope can now support humans again after many years have passed.
In season 2 we witness the emergence of leaders among the people sent back to Earth and the challenges and dangers they face trying to survive.
Intelligent writing, direction and acting make this a must see show.
Read more
One person found this helpful
Helpful
Comment Report abuse

Mike Billington author of Murder in the Rainy SeasonTop Contributor: Star Trek
VINE VOICE
5.0 out of 5 stars Season 2 was even better...
Reviewed in the United States on May 10, 2016
Verified Purchase
I enjoyed the first season of "The 100" because I thought it brought interesting characters and intriguing stories to the screen.
Season 2 is, in my opinion, even better. The conflicts are more character based than event based, a plus in my book; the actors - those that survived the first season - seemed more comfortable in their roles; and there was less reliance on special effects. The writing, which I thought was very good in the first season, went up a notch in this second season due primarily, I think, to the fact that the situations were more "real." In this season the castaways and - later - the entire population of The Ark were forced to deal with a plethora of issues ranging from distrust of "the others," maneuvering for control of the group, the need for alliances with former enemies, betrayals, and the eternal conflicts that arise when young people and their elders have to come to a mutual decision for the good of all. Not everyone handled their new situations well; some went completely off the rails while others made difficult choices based more on emotion than on reason.
This season's episodes have been reviewed countless times already so I won't add much more to the pot except to say that I thought Eliza Taylor as Clarke Griffin; Paige Turco as her mother Abigail; and Thomas McDonnell as Finn Collins were outstanding in their roles. McDonnell was especially good, I thought, as his character's personality frayed to the point that he became violent and unpredictable during the season. It was a treat to watch a young actor handle this difficult role with such finesse.
Read more
4 people found this helpful
Helpful
Comment Report abuse

J. M.
4.0 out of 5 stars Much better than first season!
Reviewed in the United States on June 18, 2017
Verified Purchase
The writers and producers of The 100 were obviously influenced by the TV series LOST. Initially their attempts to emulate a few of that programs plot structures and production styles often delivered formulaic, rushed, and cringe worthy results. In season one shock value, senseless violence and plot twists (with very little impact) were chosen over character development. I almost gave up on The 100. But.... I'm glad I didn't.

The introduction of "The Mountain People" along with the Mount Weather subplot, bringing the rest of the inhabitants of the Ark to the ground, and further development of "The Reapers" and "The Grounders" allowed the writers more space to fill with character development. There's still a fair amount of over the top, unbelievable plot points in season two, but the momentum is shifted toward character depth and plot density. Suddenly, I found myself actually caring about the characters and becoming interested in the post apocalyptic landscape.

If you were put off by poor quality writing (and acting) in season one, stay the course and don't give up. Season two is a fresh start and a much more enjoyable viewing experience.

sci-fi fan
4.0 out of 5 stars Good show if you overlook the silly decision-making and anti-adult bias
Reviewed in the United States on January 25, 2016
Verified Purchase
I had picked up the first season of this in the WALMART bargain bin and thought that is was OK so I purchased the second season from AMAZON. While I did not think a lot about the underlying "don't trust anyone over 30" meme of the series, I think that it would be enjoyed by anyone that likes the "Z FOR ZACHARIAH" style of post-apocalyptic fiction. The acting is solid and the series shortcomings are basically related to it being a TV series -- characters periodically make idiotic decisions just so they can burn up 3-5 episodes correcting the mistake. (The "let's never do anything about DOCTOR SMITH even though he tries to kill us each episode because he is a regular cast member" meme from the LOST IN SPACE TV series -- sigh --). Since the characters never learn from these mistakes, it makes things somewhat contrived after a while. Still a better TV series than most out there today.
Read more
One person found this helpful
Helpful
Comment Report abuse

M1623X
3.0 out of 5 stars Alright if you don't mind the quality
Reviewed in the United States on October 18, 2020
Verified Purchase
It's like they purposely made the picture look blurry so you buy the blu ray version...
Other than that this show is definitely my top favorite
UPDATE** HAVE A FEELING THIS DVD THEY SENT ME IS A FAKE I JUST GOT A BRAND NEW TV PLAYED THE 1ST AND 3RD SEASON DVD IN MY NEW TV AND I CAN EASILY TELL THE DIFFERENCE BEWARE OF THE SELLER!!
Read more
Helpful
Comment Report abuse

Liz Sutherland
5.0 out of 5 stars Season 2 & Long-Awaited Season 3 of "The 100"
Reviewed in the United States on November 18, 2015
Verified Purchase
Season 1 started out slowly, but gave you the opportunity to get to know the characters and to understand their history and rules.

By the time Season 2 came along the action began to build up and you had a history of most of the main characters. I am a fan; in hooked and am waiting for the long awaited year wait between Season 2 and the impending Season 3 which should return within the first three months (hopefully) of 2016. Whenever it returns I will be eagerly awaiting it's return.
Read more
2 people found this helpful
Helpful
Comment Report abuse

Rachael A
5.0 out of 5 stars So glad I decided to check this show out
Reviewed in the United States on October 18, 2015
Verified Purchase
I love this show so much I could go on for hours about it but I won't. I've already blogged about it so there's not much else to say lol. Season 1 was great but season 2 kicks it up *several* notches in quality. You think this is a show for and about teeny boppers on the CW, but little do you know, it's actually a shockingly thought-provoking exploration of morality, leadership strategy, the consequences of war, human survival instinct, loyalty, and the list could go on and on. My only complaint is that I have no clue if and when S2 will be out on BluRay. I refuse to watch this in DVD quality, it deserves far better.
Read more
2 people found this helpful
Helpful
Comment Report abuse
See all reviews

Ellie Bird
5.0 out of 5 stars Unique story
Reviewed in the United Kingdom on November 13, 2017
Verified Purchase
Again like the first season the 100 has a gripping storyline with diverse characters and it’ll always keep you guessing what’s going to happen.
Read more
Report abuse

Werecat
5.0 out of 5 stars whoever set up the description for this product got the number of discs wrong!.
Reviewed in the United Kingdom on June 24, 2016
Verified Purchase
The US Blu-ray is on 4 discs ,
Read more
Report abuse
See all reviews