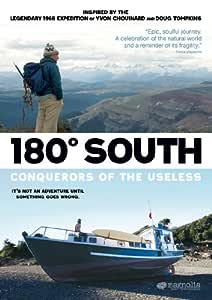 Buy new:
$9.64
Ships from: Amazon
Sold by: The Amazing Express

180° SOUTH: CONQUERORS OF THE USELESS follows Jeff Johnson as he retracesthe epic 1968 journey of his heroes Yvon Chouinard and Doug Tompkins to Patagonia. Along the way he gets shipwrecked off Easter Island, surfs the longest wave of his life - and prepares himself for a rare ascent of Cerro Corcovado. Jeff's life takes a turn when he meets up in a rainy hut with Chouinard and Tompkins who, once driven purely by a love of climbing and surfing, now value above all the experience of raw nature - and have come to Patagonia to spend their fortunes to protect it.

Director Chris Malloy has struck gold with the powerful, multigenerational environmental documentary 180 Degrees South. This is a well-crafted film filled with a charismatic cast of outdoorsmen. It's artfully edited and has a pleasant soundtrack, making it one of the finest and most progressive documentaries on wilderness ethics yet. In this feature-length film, shot almost entirely on route to and in Patagonia, Malloy follows mountain climber Jeff Johnson as he attempts to live out an adventure modeled after his heroes, Yvon Chouinard and Doug Tompkins, who traveled to Patagonia in 1968 and fell in love with the rugged country there. While the film opens with vintage footage of the Chouinard-Tompkins expedition rolling under Johnson's narration, one at first may expect 180 Degrees South to be a retread of their famous trek, which resulted in the formation of a nonprofit foundation dedicated to preserving South American wilderness. However, the viewer quickly learns that this film mainly stars Johnson, intimately narrating his thoughts about the good deeds Chouinard and Tompkins have done to promote wilderness ethics. Johnson also sincerely wonders who among new climbers and nature lovers have taken action to protect the lands they love. As Johnson sails his way down the Pacific Coast, he stops on Easter Island, which makes for gorgeous, scenic surfing footage. When he finally reaches his destination, Cerro Corcovado, Johnson meets Chouinard and Tompkins and their climbing begins. 180 Degrees South works as sheer travel documentary, but it is clearly a call to arms about protecting wild lands. Because Malloy treats this left-wing political stance delicately, commingling environmental message in with awesome climbing, sailing, and surfing footage, the film does not feel didactic. On the contrary, while it educates according to Chouinard and Tompkins's radical approach, its message feels mainstream enough to appeal to viewers who may not be converted before they see it. Because the director and the stars have taken this low-key tack, 180 Degrees South is all the more convincing as an educational tool. If you're craving inspiration or a call to action, this is your film. --Trinie Dalton