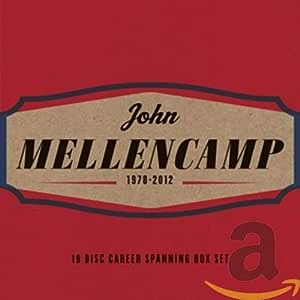 John Mellencamp 1978-2012 is a boxed set collection covering, for the first time, all of the legendary singer/songwriter's principal studio albums. The collection consists of a total of 19 CDs originally released over a recording career that spans 35 years. The set contains a total of 223 tracks and includes such mythic album titles as American Fool, Lonesome Jubilee, Scarecrow, Cuttin' Heads and the more recent Life, Death, Love and Freedom and No Better Than This and the long out of print original soundtrack to the Mellencamp-directed film Falling From Grace. Thirteen of the albums in the collection were RIAA®-certified as Gold, Platinum or Multiplatinum winners while ten of the albums achieved Top Ten status on Billboard's Top 100 Album Chart. The set includes every one of Mellencamp's thirty Billboard Top 100 singles, from 'I Need A Lover' and 'Jack & Diane' to 'Pink Houses' and 'Rain On The Scarecrow,' as well as classics such as 'Paper in Fire,' 'Hurts So Good,' 'Crumblin' Down,' 'Jackie Brown,' 'Small Town,' 'Wild Night,' 'R.O.C.K In The U.S.A.,' 'Our Country' and, quite literally, all the rest. There are bonus tracks concluding twelve of the albums, sourced from the 2005 re-mastered versions of Mellencamp's Mercury releases.

3.9 out of 5 stars
3.9 out of 5
40 customer ratings
How does Amazon calculate star ratings?
Amazon calculates a product’s star ratings based on a machine learned model instead of a raw data average. The model takes into account factors including the age of a rating, whether the ratings are from verified purchasers, and factors that establish reviewer trustworthiness.
Top Reviews

mark richards
5.0 out of 5 stars definitely one of america's best
Reviewed in the United States on February 26, 2014
Verified Purchase
forget the rather slight packaging and concentrate on musical content. mellencamp's musical growth over the decades is more than impressive and in my humble opinion places him above many considered in the upper echelon of American artists. actually more consistent in his growth than springsteen or dylan in the last ten years with songs that truly stick with you and deceptively simple lyrics. there is a warmth and sincerity to his compositions that draws you into them and them into you. the remastering is good though not necessarily new, and the entire set is inviting and comfortable. highly recommended to fans old and new.
Read more
2 people found this helpful
Helpful
Comment Report abuse

Phil Baker (music man)
5.0 out of 5 stars COUGAR STILL ROCKS !!!!!!!
Reviewed in the United States on January 6, 2014
Verified Purchase
I have been a Cougar fan since the debut album with Small Paradise, I Need A Lover, Night Dancin', and many other fantastic songs. All 19 of these cd's sound absolutely wonderful and John Cougar, John Mellencamp, or John Cougar Mellencamp, no matter which one you prefer, has had a fantastic career and has done a WIDE VARIETY of Music. After listening to all of these cd's again I go back to my original beliefs: COUGARS FIRST 5 ALBUMS ARE THE GREATEST OF HIS GREAT CAREER. There may be 10 Million fans that disagree, but that will not change my opinion. His early music is more Straight Ahead Rock and AMERICAN FOOL IS HIS GREATEST ALBUM EVER, IMHO!!!!!! I am not saying that albums 6 thru 19 are bad, far from it, they are Fantastic also. I Love all of the Cougar's music, but the first 5 were put out in my teenage years and therefore hold a Very Special Place in my heart and brings back some really great times with some really great friends and it is also SOME REALLY GREAT MUSIC!!!! Something for everybody in this wonderful box of Cougariffic Music!!!!!!!
Read more
4 people found this helpful
Helpful
Comment Report abuse

April Moore-coviello
5.0 out of 5 stars Great buy!
Reviewed in the United States on January 21, 2014
Verified Purchase
Bought for sis in law for Christmas. She loved them. Out all her other gifts away after she opened the CDs.
Read more
Helpful
Comment Report abuse
See all reviews from the United States

mfrancis
5.0 out of 5 stars A great "retrospective of Mellencamp's works
Reviewed in Canada on September 1, 2014
Verified Purchase
A great "retrospective of Mellencamp's works. My only beef: I expected some sort of notes - a booklet or such, putting it all into a historical context. But there is nothing at all. There is a lot of wasted space in the box, and if it wasn't going to be used in a useful way, I would have preferred for the box/collection to be smaller; as it is, it is decorative at best.
The music, though, is great. Any fan who doesn't have the remast5ers from a few years ago would appreciate this collection - especially at the pre-issue price of $60-$70.
Read more
Helpful
Sending feedback...
Thank you for your feedback.
Sorry, we failed to record your vote. Please try again
Report abuse

happyman
5.0 out of 5 stars What a collection....and good recording...good souvenirs from the past GREAT!!!
Reviewed in Canada on March 1, 2019
Verified Purchase
I like every albums....what a collection....beautiful box-set....all albums are the original....they are just like my LP but smaller....what a geniust idea to put that Columbia collection on CD
Read more
Helpful
Sending feedback...
Thank you for your feedback.
Sorry, we failed to record your vote. Please try again
Report abuse

K. Pettipas
1.0 out of 5 stars Buyer Beware
Reviewed in Canada on July 28, 2014
Verified Purchase
what a disappointment !!!!!.. packaging is CRAP/ should get an award for the cheapest, most fragile and most unimaginative packaging in a box set.. The card sleeves are useless, no books, liner notes, gatefold etc... O STARS on this one ....keep your money and hold on to the original cds you may still have.. cant believe mellencamp allowed this crap to be released in his name !!
A cash grab from the record company
Read more
One person found this helpful
Helpful
Sending feedback...
Thank you for your feedback.
Sorry, we failed to record your vote. Please try again
Report abuse

readerman
4.0 out of 5 stars john mellencamp 1978-2012
Reviewed in the United Kingdom on January 1, 2014
Verified Purchase
First of all I would like to say there is no complaint about the quality of the music. If you are a John Mellencamp fan you would already know how good these albums are. To have them all in one box set is a great idea. The strongest albums are probably from 1982's American Fool through to 1989's Big Daddy but some of the stuff since has been excellent. The box contains 19 CD's in cardboard sleeves and it all sits on my cd shelf very neatly indeed. The box itself is not as sturdy as it might be and there is no booklet with it at all. Just the music. Which I suppose was the whole point really. It is quite expensive at over a £100 so that might put a few people off buying it but I thought what the hell, you only live once.
Read more
10 people found this helpful
Helpful
Sending feedback...
Thank you for your feedback.
Sorry, we failed to record your vote. Please try again
Report abuse

D. Rose
4.0 out of 5 stars GREAT MUSIC -BAD TREATMENT BY RECORD COMPANY
Reviewed in Canada on August 10, 2014
Verified Purchase
Well where do you start - Music is great as you already know all his albums in card sleeves, but no booklet, no nothing, in a cheap looking box.crap treatment of a great artists career by the record company,could have been presented so much better.
Read more
Helpful
Sending feedback...
Thank you for your feedback.
Sorry, we failed to record your vote. Please try again
Report abuse

Merlin
5.0 out of 5 stars Five Stars
Reviewed in Canada on August 10, 2014
Verified Purchase
All the Mellencamp you could want in one box
Read more
Helpful
Sending feedback...
Thank you for your feedback.
Sorry, we failed to record your vote. Please try again
Report abuse

Tramps like us
5.0 out of 5 stars John Mellencamp boxed set
Reviewed in the United Kingdom on January 13, 2014
Verified Purchase
I always saw John Mellencamp as a bit sort of sub Springsteen clone until I bought "On the rural route" and my eyes were opened to a whole slew of great music. I was, therefore, pleased to see that this boxed set was coming out as it allowed me to get the whole of his back catalogue in one place. This is a mammoth set comprising 19 albums and it has taken a while to get through it all but I can honestly say that the whole body of his work from the early Johnny Cougar stuff to the newest T Bone Burnett produced "grown up" songs is absolutely first rate. On the face of it It is an expensive investment but there are, as I said, 19 albums here and it is an excellent way to get everything in one place.
I highly recommend this set
Read more
8 people found this helpful
Helpful
Sending feedback...
Thank you for your feedback.
Sorry, we failed to record your vote. Please try again
Report abuse