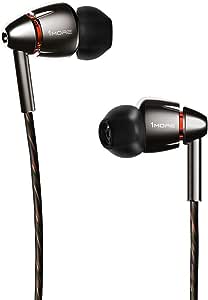 Visit the 1MORE Store
4.3 out of 5 stars 1,506 ratings
| 125 answered questions
Available at a lower price from other sellers that may not offer free Prime shipping.

Buy this product as Renewed and save $49.75 off the current New price.

1MORE’s Quad Driver In-Ear Headphones feature Four drivers which is equivalent to having Four speakers in each ear exclusively dedicated to silky highs, detailed mids, and deep bass. A diamond-like-carbon driver plus 3 balanced armatures deliver unsurpassed dynamic power, creating a spacious feeling like having nothing between you and your music. Streamlined aluminum sound chambers with tungsten textured accents flow like a jet engine yet are designed for premium comfort and sonic spaciousness.

It’s All in the Details


Bass, highs and mids are faithful to the original audio at a Hi-Fi level.

Great spacious reproduction generates the feeling of sitting in the middle of a concert hall.

4.3 out of 5 stars
4.3 out of 5
1,506 global ratings
How are ratings calculated?
To calculate the overall star rating and percentage breakdown by star, we don’t use a simple average. Instead, our system considers things like how recent a review is and if the reviewer bought the item on Amazon. It also analyzes reviews to verify trustworthiness.

funnyone
5.0 out of 5 stars These Are A Steal Considering How They Sound!
Reviewed in the United States on May 24, 2017
Verified Purchase
I originally wanted to get a decent Bluetooth headset for my I Phone 7 Plus and purchased one on recommendation from a friend. Needless to say I was less than impressed by the sound quality and people were complaining that they could not hear me clearly. Given the fact that I spent over $100 on this headset I decided to return it and try something else.

While reading reviews I came across 1More. Having never heard of the company before I did a little more research and in reading it appeared that most people that owned them loved them. Now for the record I am a Shure commercial dealer and can purchase their in ear monitors for my dealer cost which is still pretty expensive considering they are something that get carried around day to day on the job and while taking and placing orders on the road. I wanted decent sound and quality but just couldn't justify spending so much on something that could easily get lost or damaged during my day to day routine. So I gave 1More a second look.

After considerable research I decided to spend the money and go with the 1More quad driver models. No, they aren't cheap but considering all the options out in the market they are by no means the most expensive option either. The package arrived in a timely manner and upon opening it I discovered a very nice looking retail style box with a magnetic catch. The box is this nice because inside in a very well laid out design are the in ear monitors, leather case, various size silicone and foam earbuds, airplane adapter, 1/4" adapter, and a clip for the wire. Right away I noticed that the wiring and connectors appeared to be very well made with a very smooth silicone type cabling. The In Ears themselves are nicely crafted and heavier than I expected but not uncomfortable at all to wear.

After fitting the correct earbuds to them I plugged them in to my I Phone and got the shock of my life! These things sound incredible!!! No, I'm not joking, they are insane! Coming from someone that has listened to $500 a pair Shure In Ears I just couldn't believe these thing performed as well as they did. The bass response is tight and strong but not over bearing by any means. The mids and highs are clear and crisp with incredible detail and accuracy. Even at maximum volume and playing hard rock these things kept going strong maintaining incredible accuracy without any break up or distortion at any time. I also found them to be comfortable to wear and even considering their weight they stayed in place while I was using them.

I could go on and on praising these things but I think you get the idea. All I can say is that I would not hesitate to purchase these again. In fact I am pretty sure after my wife gets home and listens to them that is probably what I will be doing!
Read more
125 people found this helpful
Helpful
Comment Report abuse

Steven Mooney
3.0 out of 5 stars Excellent sound, questionable build quality.
Reviewed in the United States on July 12, 2018
Verified Purchase
I'm a little torn on how many stars to give these.

-On one hand, they sound fantastic. Crazy soundstage for an IEM, super detailed, and just altogether amazing for the price. The presentation and included accessories are equally great. The cord is prone to tangling, but is very strong and durable with no microphonics, so it's a good trade-off. They also feel quite nice in the hand. Very solid feeling.

-On the other hand, the right side randomly decided to get crazy hot while I was listening to them. Not just a little bit, either. If I hadn't removed them when they first started to feel hot, they definitely would have caused some serious burns. I couldn't pick up the right side by the actual earbud for a while after I unplugged them. I thought it must have been a fluke and was going to order a replacement until I saw another review that had a similar problem with theirs. Now I'm not so sure I want to do that.

The thing is, they almost sound good enough to risk it and I'm not sure I'm going to get anything this good under $200. Then again, I like to keep my ears at normal human temperature...
Read more
35 people found this helpful
Helpful
Comment Report abuse
See all reviews

Honey Monster
5.0 out of 5 stars Careful matching of tips required
Reviewed in the United Kingdom on June 4, 2018
Verified Purchase
I’ve read a lot of the reviews here from the plain dumb one word comments through to the full-blown essays, and it is clear that opinion is divided. I think the principal cause of these differences is due to the adequacy of the seal provided by the tips. The negative comments - like listening underwater, lack of bass, etc - shriek out that the reviewer has an inadequate seal. I can replicate most of the problems cited in negative reviews simply by putting the wrong size tips on the ‘phones. In my case, none of the tips provided out of the box gave the optimum seal, and I fell back on my trusty standby, Comply Comfort (hard to get the model I needed in the UK, but the USA site will ship to the UK via Amazon).

Once set up, the sound from these ‘phones is magnificent. Every superlative of praise offered in positive reviews is accurate. If I have to quibble, vocals on some productions are slightly repressed, but not seriously. The soundstage is good for in ear ‘phones, but not as wide as for over-ear models.

As for durability, I cannot judge as I have not had them very long. However, they seem sturdy enough, but if you have gorilla fingers and don’t look after things, these ‘phones might be fragile, like many other models.
Read more
46 people found this helpful
Report abuse

N.P.
5.0 out of 5 stars Love them!
Reviewed in the United Kingdom on March 8, 2018
Verified Purchase
Loving these phones. I won't repeat the excellent technical/sound aspects, but I find these easy to wear. Due to the higher component 'count' in terms of drivers etc, they are bulkier than some phones I've had. However, they stay put [the slightly increased weight- compared to simpler phones do not displace them], the foam ear tips fit me comfortably & perfectly [cutting out external sound to a superb degree]. I love the reinforced wire [Kevlar?] as they are far sturdier/ more resistant to bending or folding that other rubber based wires. The in-line controls are metallic, well built and convenient/easy to use. I find that seating them by 'tilting' the outside of the phones towards the back of my head engages the ear-tips into the ear-canal.
Read more
8 people found this helpful
Report abuse

Nikob
5.0 out of 5 stars Superb build and sound quality
Reviewed in the United Kingdom on February 1, 2019
Verified Purchase
Did a lot of research online before buying these and decided to buy them due to favourable reviews.
These earphones are very high quality and the sound is excellent, it is important to note that in order to get the best out of these you must ensure that you put the correct size bud tips so that you get a good seal in the ear, this makes a huge difference and could be why some people have not given 5 star reviews.
These have a great dynamic sound range and with the correct equaliser settings on your phone or computer they are amazing and do not distort at high volume.
The build quality is premium and they are also very comfortable even with long periods of use.
I can only say one negative thing about these and that is there is no cable management, so they often get a bit tangled when you put them back into the beautifully made carrying case and then take them out again but it only takes a minute or so to fiddle with them to sort that out and doesn't warrant deducting a star from the review.
Very happy indeed and would highly recommend them.
Read more
4 people found this helpful
Report abuse

Page 1 of 1 Start overPage 1 of 1
This shopping feature will continue to load items when the Enter key is pressed. In order to navigate out of this carousel please use your heading shortcut key to navigate to the next or previous heading.
Back
Next
Pages with related products. See and discover other items: Computer Tablets, Computer Tablets, Headphone Cases, high quality microphone, best travel gift, Explore lightning drives for iPhones