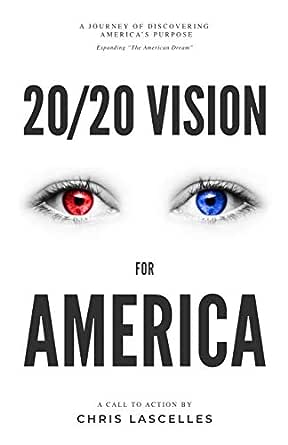 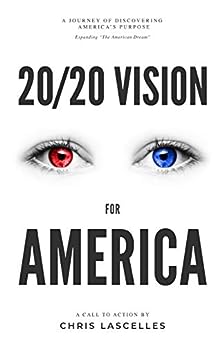 Sandi T., Hideaway TX
5.0 out of 5 stars The vision that shaped America
Reviewed in the United States on May 29, 2020
Verified Purchase
Thousands of books have been written about Christian and American history, but few have shown so clearly how these forces merged as 20/20 Vision for America by Chris Lascelles. The centerpiece of his narrative is the Mayflower Compact, a document signed by the Pilgrims before they set foot in Massachusetts in 1620. Their deep faith and longing for freedom led these religious refugees to lay out their goals for governing their new community – that it bring glory to God, advance the Christian faith, and establish a civil body politick to enact “just and equal” laws.

Their vision for government based on righteous principles and concern for the well-being of all citizens found its way into the foundations of the American colonies and eventually the Declaration of Independence and Constitution. In this the 400th anniversary of the Mayflower Compact, Lascelles appeals for a return to those principles of godly leadership and government that is just and equal in service to its people.

Lascelles, a native of New Zealand, concludes that the civil foundations formed by the Pilgrims have made the United States unique among the nations – as a sanctuary for other refugees, a place of opportunity and prosperity, a force for change, and as the leading sender of Christian missionaries.

20/20 Vision for America is not a definitive history book, but rather a call to action. Its great value may be that it’s short and succinct enough to give younger readers a broad strokes view of the great forces that launched a great nation.
Read more
Helpful
Comment Report abuse

Mark Anderson
5.0 out of 5 stars Beautiful and concise! Just wish it was out before COVID19!
Reviewed in the United States on May 25, 2020
Verified Purchase
This is my passion, to share the kernel of Liberty that God has blessed our nation with. It is not a mistake that God would call a man from a far off land to show us the naked truth in these pages. I am convinced satan wants nothing better then the light of liberty to be snuffed out. Let us hope at this late hour, this book explodes the dynamite that was penned 400 years ago and causes a second revolution!
Read more
Helpful
Comment Report abuse

Richard J. Bergstrom
5.0 out of 5 stars This is a vision with practical guidance.
Reviewed in the United States on April 28, 2020
Most people would agree that this is a time of critical testing for America. Chris Lascelles challenges the Church to see the vital role America has had in fulfillment of its purpose. But what is the vision for the future? In a sense we must look to our past to gain our 20/20 focus for the future.

Chris locks in to a formula history provides us in the Mayflower Compact. He appropriately calls it a "Devine equation". His analysis reveals it's powerful source of our unique favor we have been afforded in the past. He then specifically illuminates precisely how this equation gives us a 20/20 vision for our future.

This is a "must read". I give it my highest endorsement.

Aly G
5.0 out of 5 stars This book was made just for me!
Reviewed in the United States on May 1, 2020
I loved this book. Being a Christian and very much into politics, especially the history behind our founding and political parties, this book was written for someone like me. I have been given a new perspective and understanding of what the church can do in the current political climate. The book came across very well researched and was easy to read without a lot of fluff. It definitely made me think about things that I haven't given much credence to. I'm very grateful for that. Highly recommend this book.
Read more
2 people found this helpful
Helpful
Comment Report abuse

Amazon Customer
5.0 out of 5 stars In inspirational yet substantive book for every lover of liberty.
Reviewed in the United States on April 29, 2020
Chris Lascelles's book,“ 2020 Vision for America “, was both inspirational and substantive. He paints a picture of an American Dream that defines and celebrates key elements of the foundations of true liberty, he identifies threats upon that liberty both within and without, but he invites us to dream of the original purpose of America’s great wealth and liberty- a God-given purpose beyond ourselves. In this inclusive call to action, an invitation is given to produce wealth, to study and teach, to care for the sick and the poor to serve in civil affairs with a renewed vision. This book is a commission to live for the glory of God, for the advancement of the Christian faith and a call to take responsibility for civil government. I can not recommend it enough for every lover of liberty.
Read more
One person found this helpful
Helpful
Comment Report abuse

Tana Price
5.0 out of 5 stars A Must Read~"For such a time as this"
Reviewed in the United States on May 13, 2020
Chris Lascelles is a personal friend and leader in YWAM who lives what he writes in this book. In this book, as we look through the lenses of God's original intent for America and its founding history, it brings into clear focus the challenge to each one of us what our part is and how we can be involved to see America restored to 20/20 vision for the future and for future generations.
America is truly at a tipping point and this book brings such hope and encouragement for the future! As stated in the book, America has been blessed to be a blessing to the nations!
I also like Chris's 3 points he presents in this book:
1) Living for the Glory of God
2) Living for the Advancement of the Christian Faith
3) Being responsible for Civil Government
I highly recommend this book as a personal read, but also for churches,
home fellowships and study groups, etc!! Enjoy the read!
Read more
One person found this helpful
Helpful
Comment Report abuse
See all reviews