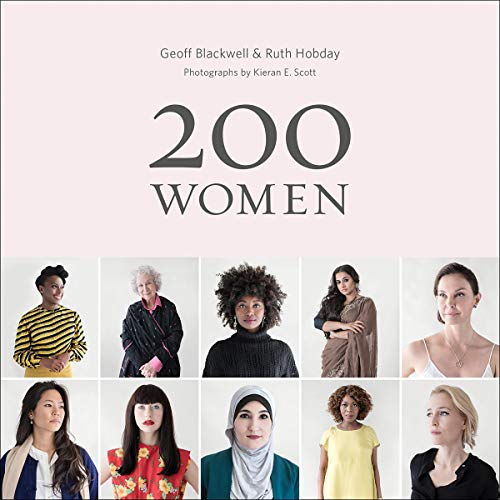 200 Women: Who Will Change the Way You See the World

In this ambitious global project, 200 women share their inspiring stories of success and courage, love and pain, redemption and generosity. This updated, abridged edition includes powerful new interviews and stirring quotes alongside selections from the original book, all answering the same five questions. This new edition is an illuminating audiobook for the modern woman and a lovely gift for mothers, sisters, daughters, and friends.

PLEASE NOTE: This is an abridged edition.

Your audiobook is waiting!
Learn more about membership
List Price: $29.61
You Save: $3.70 (12%)
By completing your purchase, you agree to Audible’s Conditions Of Use
Sold and delivered by Audible, an Amazon company
Share

Amazon Customer
5.0 out of 5 stars Change the way you see the world
Reviewed in the United States on November 16, 2017
Everybody must read the stories in 200 Women.The strength, courage and love these women have is both humbling and inspiring. It gently reminds you that everybody has a story to share and that everybody has something of value to offer, no matter their upbringing, their achievements or how society classes them.It’s a book I place proudly at the centre of my coffee table. An inspiring read, I couldn’t recommend it more highly.
Images in this review

CYCOLOGISTTop Contributor: Cycling
4.0 out of 5 stars An interesting mix: women of affluence, women of influence.
Reviewed in the United States 🇺🇸 on January 24, 2021
Verified Purchase
Bought 2 versions of this book. Digital for me (to read on Kindle), and a hardbound version for a gift. My friend and I read a few bios and discuss each one a little bit, to learn something new. It's interesting to read about women all over the world, their struggles, strengths, and life experiences. It leans heavily on more "successful" women (business owners, non profit organizers, award winners, entertainers and politicians), but I'm not offended by this, I think they can influence young impressionable girls for good, helping to motivate them to be different, to make their voices be HEARD. We need to see strong women in positions of LEADERSHIP. One common thread is interwoven throughout the book: women are considered second class citizens behind men. I find this HIGHLY offensive and this needs to change. Worldwide. If women were included in discussions of peace, environmentalism, business, childbearing, the penal system, and poverty, we could resolve ALL of the world problems. I truly believe that women aren't given enough credit. My biggest issue with the book is that that they don't include more "variety" of individuals. I've read 70 bios (so far, I've been choosing random names), and haven't read any bios on Asian, South American, Indian or Russian women (to be fair, I looked and found there's 1 from China, Chile, Russia, Nepal, and Guatemala). Since these are some of the LARGEST populations around the world, there's a HUGE gap in representation. They're also mostly individuals who are more or less successful & affluent. Does the middle aged woman from Tibet, struggling to provide for her family, have nothing to contribute? There are matriarchal societies that are also neglected (small tribes in Costa Rica, China, Indonesia, and Kenya).
Overall, I definitely find the bios... fascinating They each have a story to tell, what influenced them, what drives them. Every girl needs positive role models, strong women to look up to. This accomplishes that. Now I ask, how many young women have ACCESS to the book?

Patricia Ibarra
VINE VOICE
4.0 out of 5 stars Missed opportunity
Reviewed in the United States 🇺🇸 on October 12, 2019
Verified Purchase
I commend the author for her great effort and work of interviewing 200 women, asking them to answer five questions: What really matters to you? What brings you happiness? What do you regard as the lowest depth of misery? What would you change if you could= and Which single word do you most identify with? Most of the women are educated in their field of interest, having bachelor's or master's degrees at least. They feel that this privilege makes them responsible for doing something for less fortunate people. Being women, it is obvious that the topics most mentioned are woman's empowerment, home abuse, lack of opportunities, discrimination, among others heard so often nowadays. More women willing to devote their life to others are needed. However, I feel that the author lost a very valuable opportunity by not giving a voice to those uneducated, forgotten, invisible women. It would have been very interesting to also have the opinion of those women who are victims. Contrary to the spirit of the book, I found the selection of women interviewed skewed and somewhat discriminatory. One of the most emotional interviews for me was when a very poor woman said that what she would like the most is to have more goats.
Read more
37 people found this helpful
Helpful
Report abuse

Vivian L. Moore
4.0 out of 5 stars I felt happy, hopeful and unsure of how long it would let.
Reviewed in the United States 🇺🇸 on March 27, 2021
Verified Purchase
As a woman, seeing these women of various hues and with varied interests and a widespread list of accomplishments made me happy and wonderfully proud.
Read more
Helpful
Report abuse

Tara
5.0 out of 5 stars Gorgeous book
Reviewed in the United States 🇺🇸 on December 27, 2019
Verified Purchase
We bought this for a gift but it was such a beautiful book I want to reorder one for myself!
Read more
Helpful
Report abuse

nancy
5.0 out of 5 stars a Must read and share
Reviewed in the United States 🇺🇸 on December 17, 2019
Verified Purchase
I thought the premise of this book was important enough to give the hardback to my daughter and niece.
Read more
Helpful
Report abuse

M. Marmur
4.0 out of 5 stars Gift
Reviewed in the United States 🇺🇸 on February 22, 2019
Verified Purchase
This is a beautiful, large format book highlighting many different women. I gave it to a friend for Christmas and she loved it and is looking forward to showing it to her daughter as she gets older.
Read more
3 people found this helpful
Helpful
Report abuse

roberta h.
5.0 out of 5 stars Stunning Photography! Deep and Insightful text.
Reviewed in the United States 🇺🇸 on April 4, 2019
Verified Purchase
The book is excellent! But the used condition was a little too used for my taste. The book was written in.
Read more
Helpful
Report abuse
See all reviews

Shahrun
5.0 out of 5 stars Fascinating Ideas and Experiences
Reviewed in the United Kingdom 🇬🇧 on November 9, 2018
Verified Purchase
This book has been created by a very simple idea: Interview a broad spectrum of women to ask them the same 5 questions and take their portrait. I would love to buy the team behind this amazing work and all the women included a drink/meal to thank them for sharing their stories. What a dinner party that would be! I have taken something away from each and every woman’s words I read. I’m not saying I agree with everything they said, but it is so refreshing and fascinating to read my way through such a collection of ideas and experiences. I did feel a slight restriction to the window of wisdom as - I do appreciate the authors and photographers couldn’t visit every country in the world - there was a little repetition of women selected from the same places. That doesn’t take anything away from this volume as no two people (even siblings) experience the same things in the same way, but perhaps it paves the way for further volume(s)... Maybe even 200 Men? I’m not sure how I came across this book - but I’m so glad I did, as I know I will be picking this book up for many years to come.

Now if I may be so bold, here are my answers...

What really matters to you?
That my actions don’t cause a negative impact. I like to make people happy and laugh. And feed them.

What brings you happiness?
Doing something random that makes someone else happy (random acts of kindness), happiness in people around me, feeding people, learning new things, making things, reading, travelling and exploring.

What do you regard as being the lowest depth of misery?
Being trapped. Trapped in toxic relationships, situations or in your own head.

What would you change if you could?
I would make everyone see that all people have value and give everyone self worth. If you can see that, how can you go around causing harm, take aw some body’s dignity or any if the other disgusting things that we keep doing to each other. I hope that would also end the horrendous fashion of leisure plastic surgery. Our beauty is in our differences! And give people a thirst for knowledge. We have a lot of work to do don’t we?

Which single word do you most identify with?
Trying. I am very trying and I always do keep on trying.
Read more
7 people found this helpful
Report abuse

Hande Z
5.0 out of 5 stars 200 for all
Reviewed in the United Kingdom 🇬🇧 on October 13, 2019
Verified Purchase
200 women, a set of questions, 200 views, some of them have been said so often they may sound mundane - views such as 'I want to make a difference' have become cliché - but they resound with fresh ideas, fresh thoughts and fresh perspectives once we read through the entire answers in context.

These are views from women of all walks of life, and it is not a book dominated by the artists and intellectuals. Some, like Nomvula Shikakhane, have a passionate and moving personal story to tell, and they make no pretence of being ideologues at all. All Nomvula wants to do each day, is to walk into the kitchen and begin work as the chef.

Embeth Davidz tells us (men and women) that physical scars are of no concern. They do not diminish us as humans; they serve only to remind us of our personal experience and learning. Some of the women featured show deep wounds the cause of which they can neither forget nor forgive; others show understanding and forgiveness that make them more human than those who have brought them wrong.

This is a book for bonding women's solidarity, and reshaping men's views of the woman in today's world; views that will raise a clearer understanding of the being as human.
Read more
2 people found this helpful
Report abuse

Joyce C
3.0 out of 5 stars Dent corners and ripped page.
Reviewed in the United Kingdom 🇬🇧 on January 30, 2021
Verified Purchase
The book was damaged. It was good reference for portrait painting. I got a partial refund so overall ok.
Read more

3.0 out of 5 stars Dent corners and ripped page.
Reviewed in the United Kingdom 🇬🇧 on January 30, 2021
The book was damaged. It was good reference for portrait painting. I got a partial refund so overall ok.
Images in this review

JordanNikita
5.0 out of 5 stars Good
Reviewed in the United Kingdom 🇬🇧 on January 14, 2020
Verified Purchase
It’s big and good and yeh...exactly what you think it is.
Read more
Report abuse
See all reviews