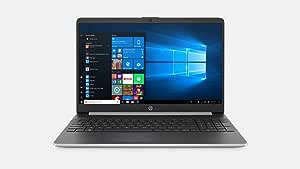 Climate Pledge Friendly
Available at a lower price from other sellers that may not offer free Prime shipping.

Buy this product as Renewed and save $62.00 off the current New price.

EPEAT products are assessed against criteria including energy use and have a reduced sustainability impact across their lifecycle.
SILVER

4.5 out of 5 stars
4.5 out of 5
1,046 global ratings
How are ratings calculated?
To calculate the overall star rating and percentage breakdown by star, we don’t use a simple average. Instead, our system considers things like how recent a review is and if the reviewer bought the item on Amazon. It also analyzes reviews to verify trustworthiness.

Charles R
5.0 out of 5 stars Nice
Reviewed in the United States on December 20, 2019
Verified Purchase
I usually don't write reviews but I think this one is warranted. This has to be the best "bang for the buck" machine that I have ever purchased. The 10th gen 1035G1 i5 is obscenely fast when mixed with the 16gb ddr4 and the 1/2 TB NVMe sdd. This is elegant as anything as well. A beautiful chassis. I was surprised by how light it is. I guess that is to be expected since I think everything except for the cpu fan is solid state. The onboard camera is very clear and a driver license text is legible for secure websites. The CPU includes neural net instructions from the Xeon line for the first time for consumer in the 10th gen chips. If you are doing data science with development suites like Anaconda using Jupyter notebooks or working with Netbeans or using a MySQL instance for learning this is blazing fast for a great price.
In a nutshell, this offers Windows workstation performance with Chromebook simplicity/pricing.

Well I bought this on Dec 16th 19', so I figured an update was in order. It is still running strong and I think that I have put it through its paces particularly on Steam gaming. Some might say that the UHD G1 graphics are a bit "light in the loafers" I think that it is fine for the 1366x768p screen. I got the latest "Resident Evil" demo to run albeit at mild settings but it still looked spectacular and acceptable frame rates. Some other newer titles like Destiny 2 will probably be a bit much rendered on the machine. For older stuff like Portal2 you can run maxed out.
The Intel 660p QLC drive is also really good i think for the price. Through installing and deleting I have about 2TB worth of mileage on the drive, still very fast, no wear according to S.M.A.R.T.
I have not had any issues with the wi-fi on my unit. I know it is not the fastest solution out there but on my Asus AC1300 router I get 325mbps from a different floor of the house the hypotenuse length being about 20-25 through a floor and a wall. I can game on Google Stadia and download a series of torrents and keep my Comcast 100mbps service relatively transmitting a lot of data for hours with no drop-offs on the Wi-Fi. Now granted I am stationary, I'm not jumping from tabletop to tabletop confusing the beam-forming of the router.
So, it a solid performer that can handle some pretty heavy stuff thrown at it.
*end of update*

Experience:
If you're like me, you hate to buy something without the full confidence in the product first. Believe me, it's difficult sometimes to buy things online due to the limitation of only being able to rely on other customer's reviews before the product is purchased and arrives at your doorstep. However, I have a pretty positive outlook on this laptop for its price. I attached a few photos to showcase its exterior mechanisms, as well as showcase a general size of what laptop to expect in real-world size (as opposed to reading numbers and expecting to visualize that in your head). The laptop is about 23cm length by 35-36cm width with a thickness of 1.5 cm. The weight is as advertised, it's comfortable to carry around and will fit in thin spaces; it won't occupy too much room in a backpack or luggage. For its technical aspects, I used a free CPU test online called UserBenchmark to compare its performance to other users who also documented their computers/laptops. (This provides a bias as it only takes into account for users who test their computers on that specific software, but it's still a good comparison to get a general idea of the performance the laptop provides.) Attached also is the report containing simplified and relevant data to its specifications. Its computing power is where this computer shines the most, as it performs in the top 75%+ percentile, which is what most consumers will desire, as GPU is of less importance in that they don't intend to purchase a cheaper laptop with the intentions to play heavier & more demanding video games on it. I was actually pleasantly surprised to hear of a lower pricing laptop that came with 16GB of RAM, which is almost unheard of for this price range, and although I didn't document how much free space was available upon receiving and setting it up, there is still ~400+ GB available after transferring the bulk of my applications and user data from my old laptop. For the price it's set at, I personally think it's a great deal since its competitors will often price the same specifications for almost twice the price. As a side note, HP doesn't load the computer with so many useless applications as Lenovo does that the consumer will more than likely never use... (occupying memory). Overall, very happy & satisfied with my purchase, I would thoroughly recommend it, and I look forward to programming code with this laptop.

Josh
1.0 out of 5 stars WiFi adapter will CONSTANTLY disconnect. Reseach part before purchasing
Reviewed in the United States on January 15, 2020
Verified Purchase
At first glance, this computer seems to be a steal. 512GB SSD, 16GB RAM, quad-core i5 maxing at 3.6GHz and only at $500! It is far from it. At this price, HP has to cut corners, and it's so painfully obvious they did.

This laptop comes equipt with the Realtek RTL8821CE 802.11ac WiFi adapter. This piece of hardware is garbage. Don't take my word for it either, do some Google searches on it! Put in the part name + "disconnect" and issues come up in abundance. There are a multitude of threads on HPs own website, dating back from 2018 even, about how this WiFi adapter constantly disconnects or misbehave.

The "solutions" that HP gives to to download a specific driver. Click the link and the file does not exist! And that's if you're able to get that far before the chip disconnects. The first 3 solutions I checked out did this, I'm not going to waste any more time with it right now.

Summary: good specs, but the WiFi chip constantly disconnects, even requiring restart to fix it. Happens instantly after reboot sometimes. Stay away from this product until a fix for the WiFi chip is implemented. Planning on returning this headache of a computer unless I can find a fix. This is just so sad because I used to love HP products. Definitely gonna have to think twice before purchasing from them again.
Read more
169 people found this helpful
Helpful
Comment Report abuse

edward w haedike jr
2.0 out of 5 stars Save your money
Reviewed in the United States on December 26, 2019
Verified Purchase
Just received computer today and was very happy to get it up and running. I will be returning it. The display is garbage and that is my own fault for not noticing the pixels when it was ordered, but it still should not be a complete washed out looking. Cheaply made. Keyboard feels like cheap plastic, it IS plastic. The only good thing I will say is that it does seem fairly quick, though no quicker than my old laptop which I am on right now. Fan is always running and noisy. I don't understand how it got any good reviews.
Read more
84 people found this helpful
Helpful
Comment Report abuse
See all reviews

Page 1 of 1 Start overPage 1 of 1
This shopping feature will continue to load items when the Enter key is pressed. In order to navigate out of this carousel please use your heading shortcut key to navigate to the next or previous heading.
Back
Next
Pages with related products. See and discover other items: Explore ssds for laptops, Explore Laptops