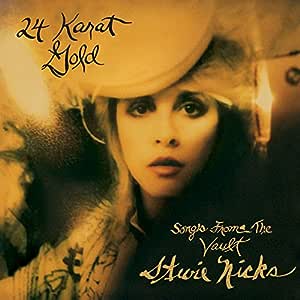 24 Karat Gold - Songs From The Vault

4.4 out of 5 stars
4.4 out of 5
713 global ratings
How are ratings calculated?
To calculate the overall star rating and percentage breakdown by star, we don’t use a simple average. Instead, our system considers things like how recent a review is and if the reviewer bought the item on Amazon. It also analyzes reviews to verify trustworthiness.
Top reviews

Christine M. Wrobel
4.0 out of 5 stars I love Blue Water
Reviewed in the United States on October 27, 2014
Verified Purchase
I am a die hard Stevie Nicks fan. I have all her albums, including this one now. I have to say that some of the songs should have stayed in the vault though. There are a few winners, but some of them really are ones that could have used more work before she released them. I love Blue Water, I like Lady, but I am working on finding others that I can become attached to,. I know it is a gamble to release songs that you didn't want to release in the first place, so don't be surprised if it takes you some time to warm up to this album.
Read more
15 people found this helpful
Helpful
Comment Report abuse

Robert B
3.0 out of 5 stars Somewhat Disappointing
Reviewed in the United States on April 11, 2019
Verified Purchase
Obviously S. Nicks has one of the two most iconic female voices of her generation the other being Ann Wilson. If I had to use one word to describe the songs on this album it would be rushed, many of them have a demo quality to them, which makes them listenable based on whose singing them but not great.
Read more
2 people found this helpful
Helpful
Comment Report abuse

Amazon Customer
5.0 out of 5 stars Wasn't on my radar... but so glad I bought this!
Reviewed in the United States on May 16, 2017
Verified Purchase
I'm not gonna lie. When I started collecting Stevie Nick's (and FleetwoodMac) LPs, I was mainly only interested in the big hits that I had come to recognize over the years. This particular album was not even on my radar. When I first came across it, I simply ignored it. I am so glad I gave it a chance, because it is really good. Right off the bat- "Carousel," "Lady," "The Dealer," "She loves him still" and "Hard Advice" are my new favorites on this album...."Starshine" has already grown on me too. Truthfully, I have only listened to this album through maybe twice. As always, I tend to play my faves over and over, so I have to really give the other songs more time to sink in. Give it a chance, you'll be glad you did!
Read more
4 people found this helpful
Helpful
Comment Report abuse

cordell jeffries
4.0 out of 5 stars Fantastic idea for a project that comes off fantastically.
Reviewed in the United States on December 11, 2015
Verified Purchase
stevie's in very good voice here. and she dusted off some great tunes to boot.

but what puts this over the top -- and i say this as only a medium-large stevie fan -- is the production of everything. the folks lending (okay, renting) their talents to this project are beyond capable. this results in a contemporary sounding release that also manages to pay musical homage to stevie's heyday (both with and without The Mac). very good b'day + h'day gift idea. 4.5 STARS.

M. Britton
5.0 out of 5 stars "She's back!" Great line from 'Crying in the Night' as great as the songstress here on her great album. Fresh as ever!!
Reviewed in the United States on October 9, 2014
Verified Purchase
This is Stevie at her finest! I have been doubting lately Stevie's abilities as a singer (a huge long time fan from the early '70s) not being able to hit those high notes, but all that doubt disappeared when I listened to this wonderful piece of work. With a voice like hers, it haunts you for days (in a good way). These are older songs written back in the day and recently recorded. I was thinking that these were recorded back in the day, but that is not the case. This is one great sounding Stevie! Her voice is strong as ever on this recording. I love it so much that I purchased the audio CD and the digital download. I cannot get enough from this album! I am once again transported into Stevie's world as I listen to these songs. I have not felt that in years! This is not Stevie's rich voice from the Buckingham Nicks days (note the Crying from the Night reference...lol) but a more mature and nurtured voice that is stronger and wiser than her younger days. And this is one fan smiling as he gets back on the Stevie Nicks fan train. Forgive me for ever doubting you Stevie. You still have it girl! And "she's back" indeed and she will keep impressing us with this music.
Read more
30 people found this helpful
Helpful
Comment Report abuse

Matthew Davis
4.0 out of 5 stars She's Done it Again!
Reviewed in the United States on November 8, 2014
Verified Purchase
OK, so I may be biased. I have been listening to Stevie's (and Fleetwood Mac's) music since 1975 and she is without a doubt my very favorite vocalist of all time. There are songs of hers that I don't like, but even on her least successful albums there are gems that I would have hated to miss. When I heard the first couple of single releases from this new album, I was disappointed and did not think they sounded all that great. Still, I purchased the CD and while I was luke-warm on it upon first listen, after spending the week playing it periodically, it has grown on me immensely. It is quirky and uneven, but I think it is the most intimate and personal of any of her solo recordings. "Blue Water" is an absolutely dreamy song that is enhanced by Lady Antebellum's appearance and will be one of those songs will have a place in my heart from now on, as so many of her past songs have done. "Cathouse Blues" is such a great surprise and is a wonderful departure from her usual style (I felt the same way about "Italian Summer" on her previous CD, "In Your Dreams"). "Hard Advice" and "If You Were My Love" are great, and after repeated listenings, "Lady", "The Dealer", and "24 Karat Gold" have thoroughly grown on me. And the CD's closing song, "She Loves Him Still" is just a gorgeous piece that would have been perfectly situated on the "Bella Donna" album. Having just seen her with Fleetwood Mac in concert, all I can say is Stevie, thanks for being part of my life for the last 39 years... please don't ever stop!"
Read more
6 people found this helpful
Helpful
Comment Report abuse

Otto
4.0 out of 5 stars Singing is good on high notes, nasal/scratchy on low notes
Reviewed in the United States on January 18, 2015
Verified Purchase
Most all the songs were composed by Stevie Nicks, so, there is a familiar consistency. The arrangements are well-done, if not compelling classic (1974-80) Fleetwood Mac quality. Nicks' 'self-plagiarism' serves her well as she weaves-in successful hooks from earlier work on some songs and recent Dave Stewart-inspired arrangements on other songs. The album is representative of Nick's earlier good but not best song-writing and singing - - there are No Edge of 17 classics here, but, Nightbird harmonies and Blue Denim hooks are easy to spot. Unfortunately, the singing is uneven - - the low notes have a scratchy and nasal quality - - always, perfect pitch, but, not a pleasant sound, and disappointing compared to the smoky but ethereal voice she had in 1974 to about 2000. At higher registers, Stevie Nicks' voice still is beautiful and unique and a nasal tone is hardly noticeable. It is strange she and Dave Stewart would include songs that essentially highlight the extent of Nicks' vocal degeneration due to age and cocaine - - Fleetwood Mac would have tossed-out the low-notes songs. As is, the album is good for last one hurrah(!) and way better than Secret Love.
Read more
3 people found this helpful
Helpful
Comment Report abuse
See all reviews

I. Macqueen
5.0 out of 5 stars STEVIE WONDERFUL NICKS
Reviewed in the United Kingdom on March 26, 2015
Verified Purchase
Stevie Nicks has given us so much over the years and she rarely disappoints so well done again for a set of great songs.
She has always written wonderful heartfelt songs and out and out rockers too - She is fantastic live too in and out of Fleetwood Mac
of which She has been a major contributor since the Fleetwood Mac album before Rumours.
Long live Stevie LOVE HER AND HER MUSIC.
Read more
3 people found this helpful
Report abuse

Kindle Customer
5.0 out of 5 stars Stevie Nicks as usual, great!
Reviewed in the United Kingdom on August 8, 2020
Verified Purchase
Another great cd , as always fantastic from our Stevie Nicks! what a great singer!
Read more
Report abuse

Kevan John Stephens
5.0 out of 5 stars Sounds superb
Reviewed in the United Kingdom on July 30, 2019
Verified Purchase
Liked it all. Absolutely nothing to dislike.
Read more
One person found this helpful
Report abuse

Amazon Customer
5.0 out of 5 stars 24 Karat Gold
Reviewed in the United Kingdom on January 2, 2019
Verified Purchase
Another Fab CD. One for the collection.
Read more
Report abuse
See all reviews

Page 1 of 1 Start overPage 1 of 1
This shopping feature will continue to load items when the Enter key is pressed. In order to navigate out of this carousel please use your heading shortcut key to navigate to the next or previous heading.
Back
Next
Pages with related products. See and discover other items: disco music, music albums, record albums, asia music, Buck Heads, Media Carousels