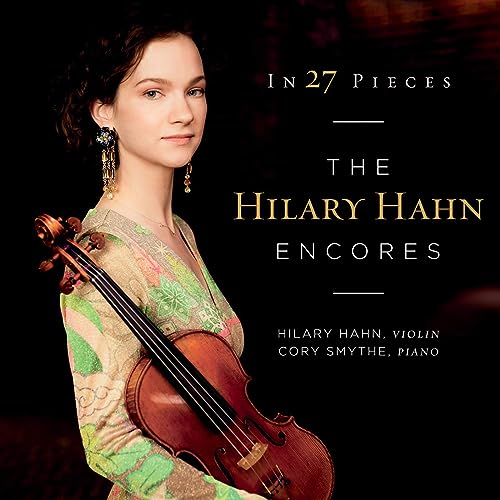 In 27 Pieces: the Hilary Hahn Encores

Hilary Hahn & Cory Smythe
January 1, 2013
4.4 out of 5 stars 161 ratings
See all 4 formats and editions Hide other formats and editions
Buy the CD album for $19.29 and get the MP3 version for FREE.&nbspCD album ships from and sold by Amazon.com. Terms and Conditions. Does not apply to gift orders. Complete your purchase of the CD album to save the MP3 version to your Music Library.

Listen Now
Buy MP3 Album $14.49
Your Amazon Music account is currently associated with a different marketplace. To enjoy Prime Music, go to Your Music Library and transfer your account to Amazon.com (US).

4.4 out of 5 stars
4.4 out of 5
161 global ratings
How are ratings calculated?
To calculate the overall star rating and percentage breakdown by star, we don’t use a simple average. Instead, our system considers things like how recent a review is and if the reviewer bought the item on Amazon. It also analyzes reviews to verify trustworthiness.
Top reviews

David Lindsay
5.0 out of 5 stars Enjoyable New Violin Music
Reviewed in the United States on October 8, 2018
Verified Purchase
In this two-CD collection, Hilary Hahn introduces 27 original works for the violin and piano. The music was specially commissioned by Hahn and recorded in 2012 and 2013. Hahn has been acclaimed as one of the most outstanding violinists of her generation ever since her first record appeared when she was 15. I am a fan.

Hahn’s original idea arose from what she perceived as a gap in the violin repertoire. The encore repertoire contains pieces that were written in the past. Encores written by modern composers are in scant supply. The pieces she selected for this collection feature a variety of moods and styles. Some are virtuosic, some rhythmic, others serious and thoughtful. Hahn is a world-class soloist and can play anything. The music flows and fits together well. The longest track is six minutes long. Hahn and pianist Cory Smythe play beautifully.

Hahn approached many modern composers to provide new music. She cold-called twenty-six composers (a process she compares to asking someone out on a date). A twenty-seventh composer, Jeff Myers (The Angry Birds of Kauai), was selected through an online contest. The composers include several well-known names, such as David del Tredici, Einojuhani Rautavaara, Jennifer Higdon, Mark-Anthony Turnage, Lera Auerbach, James Newton Howard, and Max Richter.

Hahn can be found interviewing each composer on her website and YouTube channel. She comes across as friendly, likable, and humble. I particularly enjoyed her chat with Max Richter, whose music I really like. Richter told Hahn he discovered modern composers like Philip Glass with help from his milkman. The milkman heard him practicing Beethoven and decided to broaden his mind. Richter is funny and his composition is my favorite on the album.

Violinist Hilary Hahn is not only an extremely talented musician, she is a generous one, and on none of her recordings more than this, her latest, one. This is an album of encores, but not the standard warhorses --Kreisler, Paganini, etc.—rather, all modern composers.

The result is a list of composers I, and probably most other listeners, have never heard before. Of these twenty-seven composers, for instance, I knew of three, and of only one, David Lang, do I own other recordings. She selected the composers herself, and then contacted them to commission a short piece from each of them. For the twenty-seventh piece, she conducted an on-line contest: the submissions were listened to blind –with no indication who had written them- before the winner was selected.

This is resolutely modernist music but of many shades and hues, from lyrical and reflective to angular and jarring. I doubt that any other violinist today could have undertaken such a project –Gidon Kremer, perhaps, but Hahn is a much more complete violinist than him and her talents are necessary to cause such a disparate palette of offerings to cohere together as a singular entity. She has superb technique, her tone is always what it needs to be –it soars! She is, in addition, mature beyond her age, able to tackle all kinds of good music and make them sing.

If there is any drawback to this project it is that, because all of the pieces are short -- the longest, Franghiz Ali-Zadeh’s “Impulse”, runs minutes—mood, tempo and timbre are always changing in this record. The composers’ voices change quickly and often. At times, it feels like listening to a sampler record, rather than immersion in the musical vision of one or two composers. But this is brilliant music. These pieces aren‘t to be found elsewhere on record and they deserve to be –they’re of uniformly high caliber. And Ms. Hahn plays as eloquently here as she has on any of her many fine recordings. What a treasure she is!

I haven't written anything about pianist Corey Smythe and I should have. He's brilliant.
Read more
25 people found this helpful
Helpful
Report abuse

Alan Lekan
5.0 out of 5 stars Beyond the standard repertoire
Reviewed in the United States on July 3, 2017
Verified Purchase
Ms. Hahn is amoung the best in her generation. Primarily started playing all the big concertos of the standard repertoire, Hahn has clearly established herself a leading virtuoso. But I think she finds her most vivid expression in the 20th cent (Schoenberg/Sibilus) and the contemporary compositions in this CD. Her style and sound to me is fuses effortlessly into these later compositions (where say her Mozart Sonatas to me lack galante style of the era but all subjective of course). I give her high marks for this creative, community project and exploring the unknown vs. cranking out the warhorses year after year. Although nothing wrong with that. This music here is less about virtuosity and more about expanding horizons and personal expressions. The piano by Cory Smythe matches her style very well. Not all the works here are of the same or high quality but most will resonate with a few that will leave a lasting impression. For me it was the final piece by Max Richter - the kind of composition possessing a transcendent magic you would want to be the last music you heard. Beautiful sound engineering bring fully alive her silken Strad. Compositions: 4 stars; Performance: 5 stars; Sound quality: 5 stars.
Read more
2 people found this helpful
Helpful
Report abuse

EDL
5.0 out of 5 stars Great artists, splendid music, beautifully produced
Reviewed in the United States on March 10, 2015
Verified Purchase
I finally had time to listen to this album. I can only add to the chorus. This is a terrific record of new and not quite so new music. I am writing simply to praise Hilary Hahn for championing artists who are not always recognized in major concert halls here in the US. Also, thanks to DG for having the integrity and faith in Hahn and the music to put the resources of a huge company into modern, little known music in a market that seems to be continually shrinking. If both Hilary Hahn and DG will continue to take these risks, I will happily purchase whatever they, Andreas Meyer, the producer, and pianist Cory Smythe present.
Read more
6 people found this helpful
Helpful
Report abuse
See all reviews

Philip Chadwick
4.0 out of 5 stars A bit of a curate's egg
Reviewed in the United Kingdom on November 11, 2017
Verified Purchase
I love Hahn, but this is a little too much of a good thing - one disc of encores would be enjoyable, but two .......?
Also in the nature of the thing, these are new pieces requested by Hahn from 27 composers, so this has the bonus of being new music, with the deficit of some of the pieces not being terribly good.
I think a better idea would have been to intersperse the new with the old thereby improving both.
Magnificently played goes without saying.
Read more
Report abuse

Bogdan
5.0 out of 5 stars Five Stars
Reviewed in the United Kingdom on May 28, 2018
Verified Purchase
Cool thanks.
Read more
Report abuse

parbruce
5.0 out of 5 stars Recommended
Reviewed in the United Kingdom on June 17, 2014
Verified Purchase
I bouight this after hearing a couple of samples being played on BBC Radio 3. I'd expected before hearing the samples that it would be very tonal, but as the title they are very enjoyable and highlighting her versatality.
Read more
2 people found this helpful
Report abuse

Dave and Svetlana Harper
5.0 out of 5 stars Diverse musical textures abound
Reviewed in Canada on March 7, 2014
Verified Purchase
I have always enjoyed Hilary Hahn's artistry and playing from the first time I heard her. It's not likely that a small-town-dweller such as myself will ever get to see her live. With these encores I can sit back, close my eyes, and pretend that I'm in the hall listening - the recording quality is that good. At least if you are listening on a decent sound system. If you are reading this and enjoy H.H.'s artistry, don't hesitate. All 27 pieces are inviting and unique, just like the artist.
Read more
2 people found this helpful
Report abuse