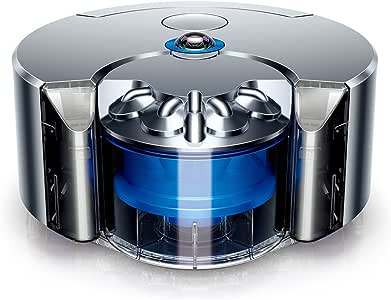 Brand: 360 EYE Robot
3.5 out of 5 stars 18 ratings
Currently unavailable.
We don't know when or if this item will be back in stock.

3.5 out of 5 stars
3.5 out of 5
18 global ratings
How are ratings calculated?
To calculate the overall star rating and percentage breakdown by star, we don’t use a simple average. Instead, our system considers things like how recent a review is and if the reviewer bought the item on Amazon. It also analyzes reviews to verify trustworthiness.

Ed OB
2.0 out of 5 stars I tried it out for a few days. As ...
Reviewed in the United States on August 11, 2016
I tried it out for a few days. As others have pointed out. The suction power is outstanding for a robot and the wide brush roll doesn't miss a spot. But after about 5 tries, I returned it. It was never able to finish the room it started it in. It would get stuck in rug fringes or low boxes under the bed. Customer support is 5 stars. They help as much as they can. I spent 90 minutes on the phone trying to get the my 360 Eye to broadcast its local SSID. We tried resetting the wi-fi, reloading the firmware. But failed. I didn't really care if the app worked or not, but I did want it to finish a room and move onto another room.

It is a shame as I had really high expectations. I suspect they'll fix some of these issues, but it might take awhile.

Tim Wilkinson
2.0 out of 5 stars If you have anything on your floor > 1 inch high, this is probably not going to work for you.
Reviewed in the United States on August 9, 2016
I've been waiting for the Dyson 360 Eye for some time and purchased it the day it became available in the US. Despite owning and loving other Dyson products, this one is a fail. As others are reporting, the robot loves to climb up objects on the floor until its tractor treads are no longer in contact with anything, and then just sit there until it's rescued. According the Dyson's support, it will fail if it attempt to climb anything more than 30mm high. Unfortunately there's just no way to stop it doing this. If your there's a speaker stand, a table, a chair, or a room transition with a raise greater than 30mm, the robot will get stuck and this is not going to work for you. It makes me sad, but I'm going to have to return it.

Also - their software leaves a lot to be desired. On launch (and at the time of writing) you cannot set the timezone of the Eye if you happen to live in the timezone contains a whitespace! So if you live on the US east coast (New York) or west coast (Los Angeles) don't expect to be able to schedule your cleaning properly. Unlike the 30mm issue, this bug I assume they can fix.

[Update: 8/29/16] No robot. No refund. No replies to emails. Sent the robot back over 2 weeks ago and Dyson aren't answering emails. Not the kind of customer service I'd expect from them.

[Update: 8/10/16] And after a nice, but unhelpful, chat with Dyson's support people, the robot has been returned.

Jonathan D
2.0 out of 5 stars First thoughts... UPDATED with my latest experiences - RETURNING IT
Reviewed in the United States on August 13, 2016
UPDATE --------- ALMOST A MONTH LATER

Well, it's going back. I wanted to really like it but it's completely unreliable and for $1000 + taxes I'm not going to be a beta tester. It gets stuck in places it didn't get stuck before and today it's stuck underneath a coffee table (see photo) and it's been there before. The app says "paused" and when I hit "resume" it just spins and goes back to pause. From what I gather, a sensor must be seeing the black of the legs of the coffee table and think it's a void and stop but if it maps the room it should know that's not the case. Dyson person told me it starts from scratch everytime when mapping the room.

I notice that the listing for the same model but at the correct retail price shows glowing reviews of people who got it for free from Dyson via Amazon, I wonder if they would feel the same if they had to shell over a grand for it.

Maybe I'll give the 2.0 version a try but for now, it's back to the Dyson upgright.

Aug 18, I've had my 360 for a week now and it seems to perform much better following their software update (granted the app is still strugling and refuses to check for updates on the machine through wifi).

Today I programmed the 360 to start cleaning at 10AM, it was running on the new "quiet" mode as opposed to "MAX". It cleaned for pretty much 90 minutes before going back to recharge and picking up where it left. I have attached the final cleaning screen showing the space. Note that white space is either walls or furniture such as sofa. In typical fashion if I was vacuuming myself, I placed the chairs on the table and made sure nothing was lying around. The bin was full afterwards and I have the Dyson set up to clean twice a week (no pet). Given the better performance since the software update I am giving it 4 stars (I don't believe this type of device at this price is really worth 5 stars, unless it placed my chairs on the table by itself, and also cleaned windows). I have 2-3 weeks before my return window expires so I will keep you posted.

Ever since Dyson announced it I have been waiting for it to arrive. I owned multiple Dyson products and for the most part I've always been happy. I tried a few robot vacuum, Neato, Samsung, Roomba, none were doing what they were supposed to. So at $1100 ($999+taxes) I had high hopes for this one. So far it's a mixed bag of feelings. Here is my early review.

Day 1
Great packaging, only 3 pieces; Robot, Dock, Power Cord. The rest is the manual.
For me it was easy to set up. Downloaded the app, connected to my wifi network and there it was. My first major issue? For $1000 it only connects to 2.4ghz not 5ghz, it's pretty lame. Charged it overnight.

Day 2
Head for the gym early and decided to hit start and see what it would do while I was away.
Came back two hours later and it had cleaned for 40 min and got back to its dock to recharge and informed me it would continue once it was charge (my apartment is about 1200 sqft)

When it did resume cleaning I was at work and I got a message that a "fault with my Dyson 360 Eye has been detected"... great.

When I got home that evening it was stuck in a corner of my foyer where the walls are painted a dark color. I think for lesson, 360 Eye can't see in the dark (though it was daytime when it got stuck).

Through the app that evening I am trying in vain to run a software update, impossible. Important to note that I have it set up to auto-update and it is on my wifi since I get to monitor it from the app. Just says "Network Error - Unable to send or receive data". Now here is where Dyson did something pretty awesome. Most product these days (Cameras, etc), when you have to update them you need to download some app on your computer, connect with a USB cable, run the update, etc... NOT so much here. Remove the back cover and filter and you have a typical USB connector, the same your computer would have. Grab a flash drive, download the update from Dyson (Hello? where is that, make it easier to find Dyson). Once you've loaded it onto the flash drive, plug that drive to the 360 Eye, press and hold the button until pink colors appear and leave it alone. It took maybe 3-5 min and I had my new update (11.2.0.10) which now shows up on the app as updated, but still, I can't try to run an update.

What's new... Now you get a battery status on the app, you can also toggle very easily between MAX suction and QUIET mode (not really quiet, but not as "sucky"). What a difference. Before this update, the battery would run out at 40 min or so. As I am writing this review, it's been cleaning for 70 minutes and still has a ¼ battery left. It's also cleaned ¾ of my home.

I am still not sure if I will keep it, one issue I have is that if you place it somewhere yourself to start cleaning and not starting from its base, the robot goes back to that spot to charge (where there is no charger) even passing by its actual charger???? I will give it one last chance and see how it does.

I should also mention like others have, the bin is small, smaller than the Dyson handheld devices and it just fills up way above the MAX line, it also stuff everything to the front and covers the filter, sucking less.

Susan Brown
4.0 out of 5 stars More effective at cleaning carpets than cheaper products.
Reviewed in the United Kingdom on March 2, 2019
Verified Purchase
It’s expensive. I bought one of the cheaper robovacs about a year ago because I have dogs and children and hate having to vacuum every day just to keep the house not looking horrible. It was OK, did a superficial clean and cleaned up the loose hairs and anything on the surface of floor and carpet but basically just sweeping up, not vacuuming. When that cleaner gave up on me I didn’t want to be left having to do daily clean myself but wasn’t sure about investing another couple of hundred quid on something not very effective. So decided to shell out on the Dyson. The difference you immediately notice is that it does actually vacuum the dirt and dust out of the carpet. It’s a bit noisy and has a small drum which is always full by the time it has done the ground floor of my house, but it has done an effective vacuum and the carpet looks clean. I think it probably is 4 times as good as the products that cost a quarter of its price. Probably not something everyone would want to invest in but if you like the idea of machines getting on with tedious housework while you do something more interesting with your time I would recommend as a useful device.
Read more
17 people found this helpful
Report abuse

Vanguard
3.0 out of 5 stars It’s not logical!
Reviewed in the United Kingdom on July 22, 2019
Verified Purchase
Good machine. And seems to have gotten better, but originally the logic in its pattern to hover was annoying to watch! Is not really worth the price tag.
Read more
One person found this helpful
Report abuse

Page 1 of 1 Start overPage 1 of 1
Previous page
Next page
Pages with related products. See and discover other items: dyson motor