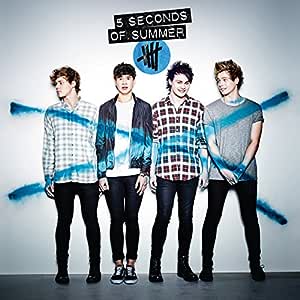 5 Seconds Of Summer Format: Audio CD
4.7 out of 5 stars 944 ratings
See all 29 formats and editions Hide other formats and editions
Includes FREE MP3 version of this album.&nbspProvided by Amazon Digital Services LLC. Terms and Conditions. Does not apply to gift orders.&nbspComplete your purchase to save the MP3 version to your music library.

4.7 out of 5 stars
4.7 out of 5
944 global ratings
How are ratings calculated?
To calculate the overall star rating and percentage breakdown by star, we don’t use a simple average. Instead, our system considers things like how recent a review is and if the reviewer bought the item on Amazon. It also analyzes reviews to verify trustworthiness.
Top reviews

RH
5.0 out of 5 stars A Stunning New Rock And Roll Phenomenon!
Reviewed in the United States on October 5, 2015
Verified Purchase
As part of a dynamic and fresh new wave of young Australian music stars making
it big in the music world in 2014, a highly talented and fascinating teenage rock band
turned rock and roll on by it’s ear when they jumped into the limelight after two years
of developing their surefire musicianship and vigorous melodies which resulted in the
release of their blockbuster self-titled debut album. By consisting of Luke Hemmings
and Michael Clifford on guitar- lead vocals each, Calum Hood on bass guitar- vocals,
and Ashton Irwin on drums- vocals, 5 Seconds Of Summer exploded upon the music
world with their surprise blockbuster album that topped the international music charts
as it paved their electrifying path to worldwide celebrite. Beginning with the Top Ten
opening hit She Looks So Perfect, the remarkable track set proceed at lightning pace
with other energetic upbeat tracks like the chart-topping Don’t Stop, Good Girls, “18”,
Beside You, Long Way Home, English Love Affair, Amnesia, Social Casualty and the
opulent final track Voodoo Doll in which they performed them with sheer exhilaration.
Not since AC/DC and The Saints have an Australian rock band became such a mass
media sensation on a universal scale by attracting coverage from the music press as
well as the recording industry who were dazzled by the band’s deeply energized rock
and roll and creative virtuosity after getting their first brush with international fame as
a support band for One Direction’s Australian tour in 2013, which got them the music
industry recognition they deserved. So with 5 Seconds Of Summer ready to conquer
the music world, you will be amazed by the complete edition of this landmark debut.

Lee Armstrong
HALL OF FAMEVINE VOICE
5.0 out of 5 stars Catching Fire
Reviewed in the United States on February 17, 2015
Verified Purchase
The self-titled CD by the Australian band 5 Seconds of Summer rocks out with a joyful spirit. "Kiss Me Kiss Me" thunders at full volume, "Let's make tonight the best of our lives." "18" is catchy with about every obstacle to young love referenced, "She told me to meet her there, but I can't afford bus fare." "Long Way Home" has a melody that sets it apart, "We're hiding out in a dream; Catching fire like kerosene." The set closer "Amnesia" appeals to me with some acoustic guitar and a brokenhearted melody, "I remember the day you told me you were leaving; I remember the makeup running down your face." While some of the tracks have a similar sound, there are enough great tracks here to endear the disc to your ear. Enjoy!
Read more
11 people found this helpful
Helpful
Comment Report abuse

M-Reader
5.0 out of 5 stars It may be a flash in the pan but don't the parade pass you by - it's fun
Reviewed in the United States on September 23, 2014
Verified Purchase
If you've gotten here - chances are you'll find this album a 5 star sensation. But, just in case you clicked something by accident: 5 Seconds Of Summer is an Australian band - officially fitting the mold of Boy Band - and teen sensation. Their music is in the same vein as: McFly, Busted, Son of Dork, The Maine, Emblem3, The Vamps, Never Shout Never, The Wanted, A Rocket to the Moon, All Time Low. If none of those current/recent band names mean anything to you - and you haven't been living on a desert island, be sure to listen to samples before you you buy. On this album most tracks are original songs by the band. The solo and rhythm lines are typical pop - and you might 'recognize' bits and pieces similar to other songs. But it's all original and the lyrics are great - honest, often emotional stories of teen angst. Falling In Love, Falling In Lust, Meeting up, Hooking up, Cheating, Lying, Backstabbing, Breaking up - pretty much covers it like an umbrella - but the lyrics - the story telling are right in line with the classic troubadour tradition over 1,000 years old - but in a very modern pop rock musical style. The last track, Amnesia, is a deeply moving, sad, melodic, soulful rendition of lost love. These guys are playing and singing, and will this be a classic in 20 years or so - who knows. Who thought New Kids On The Block would be touring in 2014 - but they are - so don't be surprised if it's 5 Seconds of Summer on tour in 2035. If they are - this will be the album everyone thinks they're listening to - so get it now while it's still available.
Read more
Helpful
Comment Report abuse

Justin Merrill
4.0 out of 5 stars Amazing self-titled debut.
Reviewed in the United States on August 5, 2014
Verified Purchase
5 Seconds of Summer, or better known as 5SoS among fans, had many people hooked after their debut single 'She Looks So Perfect'. The song was catchy and fun and was mated with one of the most unique music videos of the year. 'She Looks So Perfect' set the bar high, so how does the self-titled debut album compare? Easy. Simply put, its awesome. The album blends pop and rock elements together seamlessly, and puts it in an package that is extremely fun to listen to and dance along with. Songs: 'She Looks So Perfect' and 'Don't Stop' start off the album at an unbelievably fun pace, and are arguably the some of the best songs of the album. Fans of slower paced pop-rock songs will also feel at home too with amazing songs like 'Beside You' and 'Amnesia'. This album will make any pop fan happy. It's got flair, class, and polish. I recommend this album to fans of pop, pop-rock, and top 40.
Read more
Helpful
Comment Report abuse

Jordyn Palmer
5.0 out of 5 stars One of my favorite albums!
Reviewed in the United States on September 29, 2017
Verified Purchase
This is my second 5 Seconds of Summer album and I absolutely love it! The case isn't dinged, its nice and wrapped in the plastic, the lyric book is incredible, and I've been listening to it all day! What's even better is that it came in in four days, which is a lot sooner than the estimated delivery date. The full length of the album is just a little short of 40 minutes, but it's the best 40 minutes of my life. This album is definitely in my top three favorite albums of all time!
Read more
Helpful
Comment Report abuse

DanoTop Contributor: Bob Dylan
5.0 out of 5 stars Lyrical Satire at it's best on some of their songs. Lots of Energy !
Reviewed in the United States on April 7, 2017
Verified Purchase
I don't review music or movies as I find them to be a highly subjective subject and open to a vast array of opinion which may influence people in ways not meant to and I prefer to sway no one's opinion. I purchased this together with their first album. I recommend them highly as a great addition to your music collection.
Read more
Helpful
Comment Report abuse

Yolanda D Bearden
5.0 out of 5 stars Great Music
Reviewed in the United States on August 27, 2020
Verified Purchase
What can I say. I love this music and the Album.
Read more
Helpful
Comment Report abuse
See all reviews

Sholto
4.0 out of 5 stars Good listening
Reviewed in the United Kingdom on January 12, 2015
Verified Purchase
I bought this album for my daughter who really likes the band. I ended up with the free rip version and put it on my phone. I have to say I think they are pretty good. The songs are catchy (which I guess you'd expect) but thought they were good. One of my favourites is "Amnesia" which I spent singing all day at work (much to the annoyance of my colleagues!). I'll be listening to this album more over the coming months so that I'm up to date with the songs as I'll be accompanying my daughter and her friend when they go to one of the concerts later this year. Well worth a listen though and not just for teenagers!!
Read more
One person found this helpful
Report abuse

Vixey
5.0 out of 5 stars One of my favourite albums
Reviewed in the United Kingdom on October 29, 2020
Verified Purchase
This is one of my "desert island discs" - never get bored of 5sos - I love their youngblood album too. Not a single song on this album that I dislike - it's great. I recomment oneokrock if you're a fan of 5sos.
Read more
Report abuse

C STEADMAN
2.0 out of 5 stars Was a present
Reviewed in the United Kingdom on February 2, 2020
Verified Purchase
Not a problem was a gift for someone but she had already got this cd so sending it back
Read more
Report abuse

Ben Brown
5.0 out of 5 stars Amazing CD, Amazing Talent!
Reviewed in the United Kingdom on July 14, 2014
Verified Purchase
By far the best CD I've bought in a very very very long time! Amazing talent!
There's not a single song on the CD which I don't like and would skip whilst listening to
The extra 3 tracks on the Deluxe edition are definitely worth it as well, so what're you waiting for?!
Read more
5 people found this helpful
Report abuse
See all reviews

Page 1 of 1 Start overPage 1 of 1
This shopping feature will continue to load items when the Enter key is pressed. In order to navigate out of this carousel please use your heading shortcut key to navigate to the next or previous heading.
Back
Next
Pages with related products. See and discover other items: five seconds of summer, music albums, record albums, audio dvd