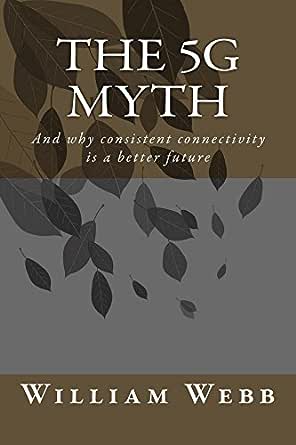 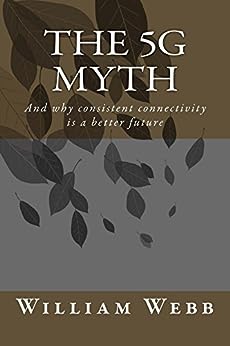 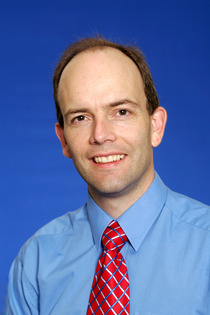 The 5G Myth: And why consistent connectivity is a better future Kindle Edition

William is a Director at Webb Search Consulting, a company specialising in providing the highest level of advice in matters associated with wireless technology and regulatory matters. He is also CEO of the Weightless SIG, the standards body developing a new global M2M technology. He was President of the IET – Europe’s largest Professional Engineering body during 14/15.

He was one of the founding directors of Neul, a company developing machine-to-machine technologies and networks, which was formed at the start of 2011 and subsequently sold to Huawei in 2014 for $25m. Prior to this William was a Director at Ofcom where he managed a team providing technical advice and performing research across all areas of Ofcom’s regulatory remit. He also led some of the major reviews conducted by Ofcom including the Spectrum Framework Review, the development of Spectrum Usage Rights and most recently cognitive or white space policy. Previously, William worked for a range of communications consultancies in the UK in the fields of hardware design, computer simulation, propagation modelling, spectrum management and strategy development. William also spent three years providing strategic management across Motorola’s entire communications portfolio, based in Chicago.

William has published 16 books, over 100 papers, and 18 patents. He is a Visiting Professor at Southampton University, an Adjunct Professor at Trinity College Dublin, a member of multiple oversight Boards and a Fellow of the Royal Academy of Engineering, the IEEE and the IET. In 2015 he was awarded the Honorary Degree of Doctor of Science by Southampton University in recognition of his work on wireless technologies and Honorary Doctor of Technology by Anglia Ruskin University in honour of his contribution to the engineering profession. His biography is included in multiple “Who’s Who” publications around the world. William has a first class honours degree in electronics, a PhD and an MBA.

Speed Daemon
3.0 out of 5 stars Good Start, Needs Work
Reviewed in the United States on October 4, 2019
Verified Purchase
The book makes some good points, though the quality of the arguments were undergraduate level, and the citations were lower than that. (Consumer magazines and websites with sketchy reputations, rather than professional journals. Citing such sources would get a term paper returned at the high school I went to, if the Internet had existed then.) I can't speak to the UK market, but in the US the mobile market is hamstrung by a number of factors: aging Internet backbone, telcos who were "ATM or bust" now just catching up with TCP/IP technology as it relates to packet switching, an aging radio infrastructure that still has wide swaths of the country without any kind of cellular data coverage. Currently 4G service is limited to major metropolitan areas and along major interstate highways. Stray very far off the beaten path and one is back in the world of circuit-switched telephony. Most cellphone users still use their cellphones as mobile data devices only in limited circumstances, with data provided by wireline carriers with a Wi-Fi LAN inside the home, office or commercial space bringing Internet (and sometimes phone calls) to the device. Only in the highway do they fully disconnect from the LAN.

5G is a simple moniker for what is a mishmash of technological, political, industrial, business, marketing, social and other influences all pulling in different directions but moving toward an inescapable fact that 5G will happen. Number-itis is a uniquely human obsession, and we humans are obsessed with getting bigger numbers for no particular reason. Although the book makes some fair (but crude) points about smartphones, it misses the fact that cellular networks are not restricted to use by smartphones alone. The author fails to understand that 5G service is already being used to provide fixed service to the home by at least half of the four major US carriers in 2018, using frequencies greater than 30 GHz that are not practical for mobile use. Also missing is catching the trend towards more 2-way traffic, with gaming and vlogging that uses increasing amounts of upstream data. While a smartphone handset may not resolve a DCI 4K movie, gamers and vloggers are not going to be satisfied with being limited to sending 720p30 "bare HD" video of themselves over a 5G network when they pay premium prices for it. They paid for bigger numbers, and will expect their viewers to see them in 2160p60 UHD video. With a HEVC encoder, upstream rates of 5 Mbit / second for video alone would be required. Complicating the problem is that many TV broadcasters are already saturating 4G networks with video uplinks, and because they have the money to pay for priority, they will continue to get that on 5G.

At $10 I guess I can't complain, but I would have asked for my money back at the original price. It's a nice first draft, but needs to get fleshed out to become a book-worthy writing. I found this cited in an online article, and although both the article and book make good points, I expect a book to explore an issue in more depth.
Read more
One person found this helpful
Helpful
Report abuse

Amazon Customer
5.0 out of 5 stars Informative and realistic explanation of the future from a global expert
Reviewed in the United States on September 15, 2019
Verified Purchase
This is a fascinating book to read from a consultant to Ofcom, the U.K. telecommunications regulator. His main point is that 5G and its promised speed improvements are not worth the considerable extra cost from the existing 4G infrastructure.

The speeds already achieved by 4G are enough, and mobile traffic has plateaued, while what people really value right now - constant connectivity - will not be delivered by 5G. In fact that higher frequencies of 5G are more difficult to achieve coverage.

Meanwhile WiFi provides 10-100x the traffic and maintains a growth of 30-40% / year. So what governments should do is to support rural broadband - with a single network that others share - and WiFi-first mobile networks.

At any rate he predicts BT’s WiFi and mobile infrastructure combination in the U.K. will mean an offering of WiFi-first mobile network in 2021 with offering that are cheaper and better than 5G or 4G competitors.

I now understand why 5G roll-out has been so slow and why the U.K.’s and Apple’s slower roll-out is not cause for alarm. Meanwhile I’m intrigued by focusing on train-track WiFi and rural broadband as the true contributions to national productivity and competitiveness.
Read more
Helpful
Report abuse

Martin Cooper
4.0 out of 5 stars Exposes the 5G KoolAid
Reviewed in the United States on October 29, 2019
Verified Purchase
In agonizing detail persuasively tears down the 5G myth claim by claim. But the author goes a bit overboard in predicting the demise of cellular carriers, and underestimates the importance of wireless collaboration in the future.
Read more
Helpful
Report abuse
See all reviews

Mr. Timothy W. Brown
5.0 out of 5 stars A very honest and fair critique of 5G developments and a starter for useful discussion
Reviewed in the United Kingdom on December 28, 2016
Verified Purchase
On seeing this book a few days ago, I saw how compelling it was and straight away went to charge up my kindle to then download it to read on my travels this Christmas time. The points made and questions rasied in this book are not ones that some in the telcommunications industry may want to deal with but they are very valid questions that have to be asked and answers need to be sought. Without hesitation I would say to anyone working in telecommunications, whether they be academia, industry, consulting, government and indeed an economist - they should most certainly read this book and when enough people have read it some well thought round table discussion needs to be had. I certainly enjoyed reading it and have written down many things to think about further.
Read more
5 people found this helpful
Report abuse

Martin Cave
5.0 out of 5 stars Food for thought
Reviewed in the United Kingdom on December 9, 2016
Verified Purchase
I am one of William Webb's co-authors, but not on this book - which gives a bracing and clearly argued account of why the road to ubiquitous 5G may be harder to traverse than the industry and many governments appear to think. The issue raised which seems to me to have particular salience concerns the relationship between the willingness to pay for more connectivity (and hence the extra revenue which it will generate), and the cost of the investment required to achieve the vision. We will know in due course who is right, but investors in the industry should take note of what is written here.
Read more
4 people found this helpful
Report abuse

Amazon Customer
5.0 out of 5 stars Very useful guide to the challenges of the 5G roadmap
Reviewed in the United Kingdom on December 21, 2016
Verified Purchase
Clear and simple overview of the direction being taken towards 5G and the likely challenges and pitfalls before we get there.
Read more
2 people found this helpful
Report abuse

M Clark
4.0 out of 5 stars Debuking the hype around 5G
Reviewed in Germany on August 31, 2019
Verified Purchase
This book successfully debunks much of the hype around 5G, the newest mobile network technology. The author questions the business case for building 5G networks explaining that the increase in speed it promises will not entice users to spend more for mobility
Read more
Report abuse
See all reviews