Add to Cart
$20.13
+ Free Shipping
Sold by: Book Depository US
Have one to sell?
Sell on Amazon 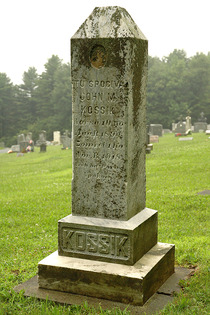 63 Alfred Street: Where Capitalism Failed: The Life and Times of a Venetian Gothic Mansion in Downtown Detroit Paperback – June 13, 2010

63 Alfred Street: Where Capitalism Failed: The Life and Times of a Venetian Gothic Mansion in Downtown Detroit is more than the tragic history of a grand residence built 130 years ago that has fallen into virtual ruin today, used by crack dealers and the local homeless for the past 40 years. 63 Alfred Street is an extremely critical examination of the urban decay that has plagued Detroit's inner city, and the factors that cause it. Author John Kossik, a former resident of Detroit, compares the inner city's social ills to a Hydra - just like the mythical monster of legend, it has many heads (causes), which must be tackled as a whole and dealt with properly or else they will regrow. Kossik names many culprits in Detroit's degredation, from the demolishing of vibrant neighborhoods to create road systems that encouraged white flight, to a tax burden that drives out young families and keeps them from returning, to a culture of entitlement amid union auto workers that cripples Detroit's auto industry, to Detroit's unhealthy dependence on the auto manufacturing industry in the first place, and more. Kossik doesn't have all the answers, but through his judiciously researched blend of history and sociology, he hopes to spread greater awareness of the problem and aid the search for solutions. A thoughtful and invaluable study of seemingly intractable social problems, 63 Alfred Street is highly recommended. --Midwest Book Review, Library Bookwatch, January 2011

John Kossik was born and raised in the Downriver suburbs of Detroit. He graduated from Michigan State University with a B.S. in Chemical Engineering in 1983. He has lived and worked in the Pacific Northwest since then and has written numerous articles in publications such as Chemical Engineering, Chemical Engineering Progress, Genetic Engineering News, Pharmaceutical Manufacturing, Filtration+Separation, and Bioprocess International. He is co-patent holder of Disposable rotary drum filter, US Patent No. 6,336,561. A life-long Tiger fan until that venerable structure was abandoned in 1999, he subsequently gave up watching the game. He lives with his wife and two grown children in suburban Seattle. An amateur photographer, historian, and marine reef-keeper, this is his first book.
Start reading 63 Alfred Street: Where Capitalism Failed on your Kindle in under a minute.

3.5 out of 5 stars
3.5 out of 5
16 customer ratings
How does Amazon calculate star ratings?
Amazon calculates a product’s star ratings based on a machine learned model instead of a raw data average. The model takes into account factors including the age of a rating, whether the ratings are from verified purchasers, and factors that establish reviewer trustworthiness.
Top Reviews

Jared Christopher McCann
3.0 out of 5 stars Somewhat interesting
Reviewed in the United States on April 25, 2011
Verified Purchase
I have to admit I bought this by hitting the wrong key on my Kindle, and thought that I might as well read it. I love old houses and "ruin porn", and for the most part liked his account of the house. I also thought the read was a bit disjointed, but was impressed about the sheer wealth of obscure information and wondered how he thought to find it out, such as interviews with descendents of the residents. I skimmed over a lot of it, mainly because I read a lot of history, and found parts redundant to my experience. I would have liked to have read a little more about decorating and construction methods. Was it worth the time? Probably. But he sure does seem obssessed with that turret.....
Read more
6 people found this helpful
Helpful
Comment Report abuse

@ScienceDoge
1.0 out of 5 stars 63 Alfred Street: Where the English Language failed
Reviewed in the United States on February 18, 2014
Verified Purchase
If I didn't have to read this for class I would have deleted it off my Kindle after the first few pages. The author's "style" is very grating as he abuses transition words. Every single sentence starts with "Surprisingly," "Sadly," or "Interestingly,". Maybe he is simple minded and really does think that every single fact he is relating really is surprising, interesting or sad but it makes for a highly annoying read. Additionally, the tone flips from that of a 5th grade report (let me relate every single fact I know about this person, in biographical order) to a weird narrative where the author attempts to "set the scene" for the reader by telling us what an individual was thinking about the day, their gym habits, etc. The most laughable (and most inappropriate) was when the author gave us a first person account of an architect committing suicide, complete with describing the "waves" of depression that washed over him and what the gun muzzle tasted like. At other times we are informed that an individual "must have" liked this, "must have" read this book, "must have" thought such and such was interesting, ad nauseum.

There are many, many better books out there related to Detroit history and architecture that would better serve an interested reader. This book is not one of them.

tfrodent
5.0 out of 5 stars 63 Alfred Street
Reviewed in the United States on December 23, 2011
Verified Purchase
How do you begin to get your arms around--let alone begin to grasp and comprehend--the malign, sometimes even gleeful, neglect that has over the years brought the City of Detroit to increasing ruin? As superficial (i.e. almost all) observers still do not, amazingly, understand, this ruin does not directly apply to the much larger Metro Detroit--a far more prosperous region of which the City of Detroit is a shrinking component generally subjected to malign neglect. Yet, as many in the larger metro area themselves still do not fully understand, this destruction has had soul-wrenching effects for it and its greater future prospects. How can so much in the city that is/was beautiful, evidence of past and great human capital, be so wantonly abandoned and thereby destroyed by its makers; how can a region and country allow this to happen; and how do you grasp the direct emotional consequences of seeing this? No "explanation" of causes can begin to be satisfactory in addressing the emotional response and emotional question. Kossik's approach goes to the core of the fundamental emotional questions, by looking in unrelenting detail at 63 Alfred Street. How could what happened at 63 Alfred Street have happened so broadly?

This is a book that should be reissued by a serious commercial publisher. With the careful editing that this text deserves but has not yet received, it could sell decently and assume a high rank among the few books that have considered these questions in a serious and original way.

.
5.0 out of 5 stars This House Has Seen it All.
Reviewed in the United States on November 21, 2010
Verified Purchase
Unfortunately, Detroit has become an example that other cities are learning from. I just hope that the people of Detroit can learn from it too. This book is fascinating. It portrays a house in downtown Detroit as an "observer" of the rise and fall of the area around it. This is one of the most creative approaches that I have seen from the author of any book on civics and urban decay. The actual house is very near Ford Field, in case anyone is interested in going to see it. Unfortunatley, its ruins have spent the past 40 years as a crack house and a haven for prostitution.
Read more
3 people found this helpful
Helpful
Comment Report abuse

H.
4.0 out of 5 stars delivered as promised
Reviewed in the United States on December 10, 2015
Verified Purchase
My Great Grandparents lived there. Worth the read. for both background and history.
Read more
Helpful
Comment Report abuse

Michael G. Smith
5.0 out of 5 stars Engaging story based on extraordinary research
Reviewed in the United States on September 20, 2011
Verified Purchase
I didn't expect this to be one of those books you can't put down--but it was. In fact, I was in the middle of reading another book when I bought this and planned to read just the first few pages to get a feel for it. "63 Alfred St" was so engaging, I kept going to the end before going back to where I left off in the first book.

Kossik's book demonstrates (again) that a tireless researcher can do just as well writing history as the "official" historians at the universities. The text is extensively footnoted, even to the degree of providing a "how to" of historical research by example.

Kossik deserves credit for avoiding faddish ideological assumptions and conclusions. The observations he shares at the end of the book concerning Detroit's decline are well-founded and insightful, more insightful in my view, than the theories advanced in thousands of articles and studies. I disagree with one of the previous reviewers who asserts that Kossik merely blames, "the usual suspects responsible for Detroit's decline: local government gone a muck, racial inequality, industrial decline, union excess, etc...". Kossik recounts the demise of the neighborhood in meticulous detail, leaving no questions as to what, when and how. When considering the role of 63 Alfred Street as a bellwether of larger forces, Kossik's conclusions are straightforward and logical. They are also clearly separated from the historical section of the book and labeled as an attempt to explain underlying causes.

My only criticism is that that book needs to be proofread. Kossik's writing is fine, but someone needs to go through and correct the improper usage of possessive tense and minor misspellings. Otherwise, I highly recommend this book and hope that Kossik continues to research and write more.

Linda Wilkes
5.0 out of 5 stars Five Stars
Reviewed in the United Kingdom on November 18, 2015
Verified Purchase
nice book - my son-in-law has requested this for his Christmas stocking !!
Read more
Helpful
Sending feedback...
Thank you for your feedback.
Sorry, we failed to record your vote. Please try again
Report abuse

See all reviews from the United States
Pages with related products. See and discover other items: history of detroit