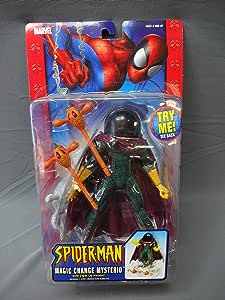 Amazon Customer
5.0 out of 5 stars Five Stars
Reviewed in the United States on January 23, 2017
Verified Purchase
The only Mysterio figure you need.
Read more
One person found this helpful
Helpful
Comment Report abuse

Fernando Morales
5.0 out of 5 stars Beautiful figure
Reviewed in the United States on May 28, 2011
Verified Purchase
Ohhhhhhhhhh, I love this figure. Nice details. And the gimmick it's got is just superb. Face changing gimmick, what more do you want? And the best of this figure is that you can barely see the faces inside the bubble helmet....which doesnt take out the Mystery of MYSTERIO. Very cool.
Read more
5 people found this helpful
Helpful
Comment Report abuse

A. Kuehn
4.0 out of 5 stars MASTER OF ILLUSION!! GREAT VILLIAN DONE WELL!!
Reviewed in the United States on May 25, 2005
Mysterio is another one of my favorite Spidey villians and I'm glad he's finally made it into the Spiderman Classics series. Truly the best offering in this current series. Mysterio, a.k.a Quentin Beck, was formerly a movie special effects expert who put his talents to use towards a life of crime. He has a "magic change" action which means his head inside his helmet has 3 faces on it--his human face, a monster face, and a alien/mutant-type-baby face. There is a button on his back that revolves the faces around and a little light on the inside of the helmet casts enough light on the faces to give them an eerie look. He also has a display stand that resembles Mysterio's fog that is ever-present. He usually appears from it or disappears into it for an escape. The stand has pegs for you to attach Mysterio to and wheels on the bottom of the stand so it will roll around with him on it. The display stand fires 2 orange projectiles that are rubbery and safe. Personally, I would have been happy with a chrome finish on the helmet and the display stand. The figure doesn't really need the face-changing feature, but it certainly doesn't hurt. The articulation isn't exactly "cutting edge", but it is good and the joints were nice and tight. The details on his costume are well done, too. The cape is soft and pliable, but could be torn off easily by younger children. The grid design on his costume isn't his "classic", wider style, but again, it still looks nice on this figure. This is an excellent figure for any Spidey fan--young or old. And, an excellent buy. A classic villian they can have fun with against the amazing Spiderman. As usual, this figure is sure to go fast. Hopefully, you can pick one up before they disappear.
Read more
10 people found this helpful
Helpful
Comment Report abuse

Lestor neeker Wong
4.0 out of 5 stars Hey presto!
Reviewed in the United States on June 10, 2005
Mysterio the master illusionist makes his way into Spider-Man Classics, and it's not a surprise that I quickly picked him up to add to my collection of action figures. Here's a quick look at the latest villain in the line. Please note, however, that this review is written from the perspective of a collector, and may not makes sense to occasional buyers of Toy Biz figures.

The sculpt on Mysterio is well done, even though I didn't like the rather over-sized "bowl head". The head appears larger than how he appears in the comics, and I'm guessing it's because of the need to incorporate the action feature within the head. The action feature also means that a button has to stick out from his back. It doesn't exactly concern me, but stricter fans will no doubt lament the "destruction" of the sculpt. Otherwise, the gloves, torso and rubber cape are all relatively well done, and should please most fans of the series.

The paint application on Mysterio is acceptable, although it does have some minor paint slips. This is not unusual for Toy Biz merchandise. The main problem is a bad case of over-spillage on the gold rim around his head, and the one near his gloves. While picking for my own, I noticed that all the figures are in one way or another affected. The effort is quite annoying to say the least, and is certainly not the strongest point of this toy.

I love figures with loads of articulation, and we all know that Toy Biz are the kings in pumping out a high number of articulation points for their figures. Yet, at times, they're also capable of including too many useless and ugly (Black Cat's neck, anyone?) points. Thankfully, Mysterio is just standard Toy Biz. It has the usual shoulder ball joints, double jointed elbows, wrist swivels, palm swivels, waist twist, ball jointed hips, double jointed knee, ankle swivel (with side twist) and feet bends. What Mysterio doesn't have us a proper neck movement, which is, again, due to the action feature. More on that later.

It's also interesting to note about the joint quality while discussing the articulation of the toy. While they're quite tough on the whole, the right double elbow joint on my figure is pretty loose. This points again to the QC, or rather, the lack of it at Toy Biz. Not a problem, if you seldom pose your figures, but a little frustrating if you actually do.

Mysterio has some sort of a base with wheels, which supposedly simulate the "smoke effect" when he does one of his illusions. It wasn't well done though, and ended up looking pretty lame as well. The base is to shoot two missiles that look like... ah crap, I don't know what they look like. Personally I think the idea is to provide some trigger action fun. Most collectors will do well to put this one away. but I'm guessing that the kids will like it. At least, that's what I think Toy Biz are thinking.

The main action feature on this toy is a light-up effect in the "bowl head". The button on the back activates a different "face" of Mysterio each time. There's a human face, a monstrous face and an alien-style face. It's a nice little idea, but it grows old after three clicks. The faces also light up whenever the button is pushed, which is why batteries are included for this. Once again, this should make the children happy for a while.

Mysterio is not my favorite villain, but he's a icon from the Spider-Man Universe nonetheless. He's also an affordable option for fans that want to build their collection of Spider-Man characters, as well as kids who merely want a fun toy to play with. I highly recommend this.