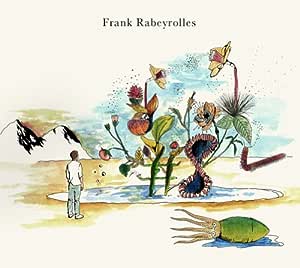 For fans of Indietronic, Dreampop, Lofi. Bio: Basically we know very little about Frank Rabeyrolles... a PHD in Philosophy, a endless love for funny analog drum machines and tambourines and many dedications in his albums to his beloved cats Leo & Elliot ...Anyway today he's putting the final touch to his 8th album so let's dig up some more about this discreet and unclassifiable french human character. Discovered in 2004 with " Life behind a window " under the Double U alias, he manages to surprise and seduce the public and the press in France ( teacher's pet of Les Inrocks ) with his dreamy hybrid-pop/songwriting. International press ( De bug, Xlr8r,Lodown...) fall as well for the charm of this other vision of "french touch". Frenetically productive, Frank R. keeps up the pace since then, releasing a new album every year, first with Double U then with Franklin, new name which translates his serious desire of continuous mutation. In 2006, he also creates his label Wool Recordings, releasing on vinyls exclusive tracks of Laetitia Sadier, Stereolab's grand lady, Castanets split EP and re-issueing rare sought-after 70's estonian vocal jazz, also inviting new talents like Peter Broderick, Benoit Pioulard ...Without a proper carrier plan, Frank Rabeyrolles manages anyway to remain the same but keeps surprising his followers: with " Artificial light " in 2011 a new step comes along, this solar album meets a better international exposure through a brilliant remix by Com Truise, his synthetic layers and dancing beats seducing as much fashion hipsters than geeky bloggers.Frank Rabeyrolles feels now ready to issue a piece under his own name, putting his soul out in the wild : poetic, fragile and pictural, this upcoming album "#8" loves playing with the rules of contemporary pop He says : " The idea of labelling the album with just its rank number in my production is like my own private joke to those who keep looking endlessly for the "next big thing" . Music is a lot more to me than a "genre". It has to be at the crossing of imaginary worlds and mine is somewhere between handmade "Songwriting" and playful electronic variations ...I hope many listeners could bond to those different universes. "