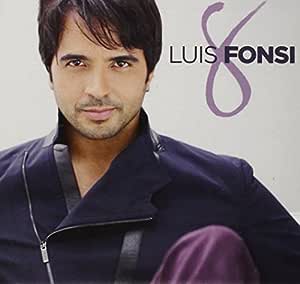 Luis Fonsi is releasing his new studio album titled 8 . 8 is the number of albums Luis Fonsi has released and this by far is the most anticipated album in the industry. The album was recorded in the famous recording studio in Kensaltown, London, under the production of the producer and song-writer Martin Terefe, winner of multiple Grammys for his collaborations with praised artists, such as: Jason Mraz, James Blunt, KT Tunstall, Mary J. Blige, James Morrison and Craig David, and many more. The mastering of the album took place in the legendary Abbey Road Studios in London.

In 15 years of artistic career, Luis Fonsi has attained the title of the leader of the new generation of Latin music, obtaining recognition for his platinum and gold record sales in Mexico, Spain, US, Puerto Rico, Argentina, Colombia, Venezuela, and Central America. In addition, he has received multiple awards, including: Latin Grammy for Song of the Year (Aqui Estoy Yo), five Latin Billboard Awards, eight Premio lo Nuestro, one ASCAP Voice of Music Award, more than 10 Premios Juventud, one Cadena Dial 2011 award, and received the highest recognitions given at the Festival de Vina del Mar during his appearances in the years 2004, 2009, and 2012.

In addition to his accomplishment in the music world, Luis Fonsi reached another dream after performing on Broadway with incredible success in mid-2013, with the internationally recognized Forever Tango by Luis Bravo.