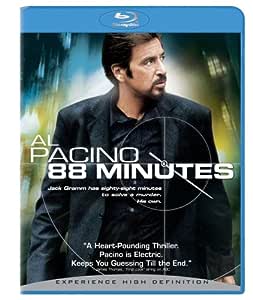 A college professor, who moonlights as a forensic psychiatrist for the FBI, receives a death threat that says he has only 88 minutes to live. To save his life, he must use all his skills and training to narrow down the possible suspects, which include a disgruntled student, a jilted former lover and a serial killer on death row.

Al Pacino looks startled through much of 88 Minutes, as though taken by surprise at being cast in a thriller that must've first passed across the desks of Clint Eastwood and Harrison Ford. Still, Pacino brings his usual oomph to the role of a Seattle forensic psychiatrist, whose testimony secured the death sentence for a crazy serial killer (Neal McDonough). Wouldn't you know it, the very day the killer is sentenced to die, a copycat "Seattle Slayer" is on the loose, and Pacino starts getting ominous phone calls telling him the exact time of his own death. Tick tock: it's 88 minutes away. The film then serves up more red herrings than a Stalingrad fish fry, as possible culprits pop up every five minutes or so (among them an attractive group of med-school students played by Alicia Witt, Leelee Sobieski, and Benjamin McKenzie). Lapses in logic abound, but if you hunker down and zone in on Pacino's weary-eyed, poufy-haired professionalism, you can enjoy the goings-on. (They even make him run up flights of stairs, which one would have thought beyond him now.) Seattle's frequent stunt double, Vancouver, B.C., stands in as a location, and Jon Avnet supplies the slick direction. The cast is talented (including Amy Brenneman), leading you to guess that a lot of people will do anything just to work with Al Pacino. And you've got to admire Pacino's chutzpah at sharing the screen with statuesque actresses such as Brenneman and Sobieski; they tower over him, but he still holds his own. --Robert Horton

4.4 out of 5 stars
4.4 out of 5
223 customer ratings
How does Amazon calculate star ratings?
Amazon calculates a product’s star ratings based on a machine learned model instead of a raw data average. The model takes into account factors including the age of a rating, whether the ratings are from verified purchasers, and factors that establish reviewer trustworthiness.
Top Reviews

ThomasL
3.0 out of 5 stars If you have nothing better to do, then watch this.
Reviewed in the United States on December 4, 2019
Verified Purchase
Plot twist are all but absent. The ladies all do a fine job of bring their respective characters to life. Mr Pacino is not by any means at his best. Story is descent but to wide in nature to develop well in "88" minutes. The disc played well except for one quick freeze.
Read more
One person found this helpful
Helpful
Comment Report abuse

david hanshaw
5.0 out of 5 stars ** 88 Minutes Is Classic Pacino Crime Drama
Reviewed in the United States on June 22, 2014
Verified Purchase
I gave this film 5 stars because it is an intelligent suspenseful crime drama ! Fans of this genre will not be disappointed it delivers perfectly what we expect of the type of films that have made Pacino's career. Don't believe the bad reviews ! When you watch any film it requires a "Suspension Of Disbelief" and yes criminals can be that smart, that is why many are still able to run their operations from behind bars. The characters were terribly flawed(only adding to the realism) the storyline was plausible and the Directing was great, and the acting was inspired. What more is required to make a great film ? Some reviewers got hung up on the scenes about the "Pulleys" and others said women could not be that mean to each other in real life. Are you kidding me ? One need only watch a show like "Deadly Women " on "Investigation Discovery" to know that women can be vicious to other women ! This film is full of "Nail Biting " suspense and violence which seems realistic to me . If you like a great crime drama that is not watered down with "Sappy Hallmark Moments", you will enjoy 88minutes !!
Read more
3 people found this helpful
Helpful
Comment Report abuse

PHOEBE HOPPER
3.0 out of 5 stars SHOULDA-COULDA . . . wish he hadn't . . .
Reviewed in the United States on December 22, 2019
Verified Purchase
I'm such a sap for Pacino or DeNiro movies -- just not this one. Contrived/predictable script, disrespectful hoop jumps for an iconic actor, too many shrieking women in peril, wimpy ending. Good popcorn movie, watch it anyway.
Read more
Helpful
Comment Report abuse

Agilebrainz
3.0 out of 5 stars Enough popcorn and beer might make it ok.
Reviewed in the United States on October 27, 2016
Verified Purchase
Pacino should not have taken this role. His every attempt to create depth in his character just made the plot and the rest of the cast look like what they were- weak. It has all the earmarks of a standard glossy thriller, but somehow moves like a car running on only 5 cylinders. You'll get there but you won't enjoy it. I kept waiting for it to be over, since it was obvious how it would end.
Read more
One person found this helpful
Helpful
Comment Report abuse

dawkins jr
3.0 out of 5 stars Ridicuous plot but somehow enjoyable.
Reviewed in the United States on June 17, 2014
Verified Purchase
Even with a dye job, Al Pacino is way to old for this film, but still he is Al Pacino and he still has his acting chops. The serial killer looked and sounded like he came out of serial killer central casting and the ending silly as heck, and of course for the Pacino character IT'S PERSONAL (!) but it somehow managed to keep my interest. Lots of people hated this film though, so proceed with caution.
Read more
3 people found this helpful
Helpful
Comment Report abuse

chad wilfong
3.0 out of 5 stars Ok little knock off of great thrillers
Reviewed in the United States on January 23, 2019
Verified Purchase
It’s al Pacino I’ll watch/own anything that he is in. But this although entertaining to a point was the beginning of the downfall of the legend.
Read more
Helpful
Comment Report abuse

If you don't like to think while watching a film, you can still enjoy this one for the cliffhangers and special effects.

Brian J.
2.0 out of 5 stars Brian’s Haiku Movie Review
Reviewed in the United States on January 28, 2019
Verified Purchase
Eighty-eight minutes
Is a bit too long for me
When this is the film.

jackie jayes
1.0 out of 5 stars Dont Waste a Second!
Reviewed in the United Kingdom on June 23, 2017
Verified Purchase
A throughly nasty little film,and makes one wonder how 'actors' of the caliber of Pacino and William Forsythe ever agree to take on such rubbish,Pacino could have phoned his part in as could all the others.
But the real issue is how does Hollywood think that showing graphic scenes of women being tortured and killed is 'entertainment'
i counted 6 'producers' of the film