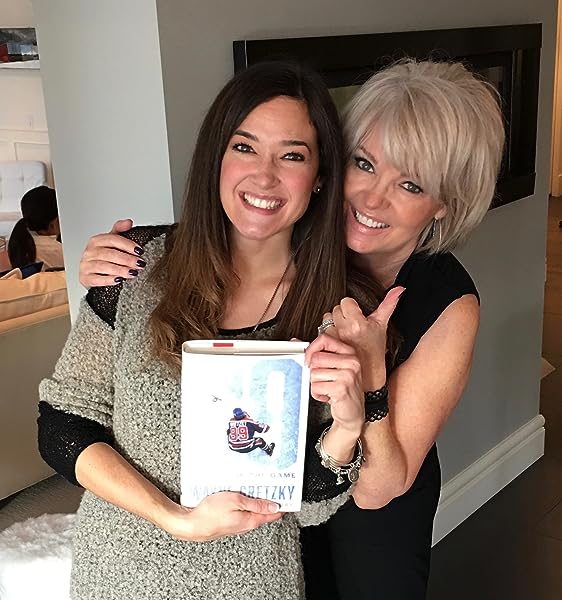 Praise for 99: Stories of the Game

“The Great One delivers a personal history of the National Hockey League...Gretzky’s sense of his sport’s history rings clearly throughout these pages, as if he is the tour guide of a museum in which he also has created some of the best art...This enjoyable book provides an overview that will educate longtime fans and relative newcomers alike.”—Kirkus Reviews

“One of the most enjoyable hockey books to be published in many years.”—Booklist (starred review)

“Arguably the best player in the history of hockey, [Gretzky] has written a warm and enthusiastic collection of memories and stories. This book showcases some of hockey’s best moments through the keen eyes of an avid student, lover, and ambassador of the game. VERDICT: Essential for all hockey fans, old and new.”—Library Journal

“Wayne Gretzky’s 99 glides across a lifetime of high sticks and higher stakes.”—Vanity Fair

Wayne Gretzky, nicknamed “The Great One,” is considered by many to be the greatest hockey player ever. He is the leading scorer in NHL history, and is the only NHL player to total more than two hundred points in one season—a feat he accomplished four times. At the time of his retirement in 1999, he held sixty-one separate NHL records (forty regular season, fifteen playoff, and six All-Star)—and still holds most of them today. His honors include 31 Hart, Art Ross, Conn Smythe, Lester B. Pearson, and Lady Byng trophies and awards.

His teams included the Edmonton Oilers (1979–1988, including four Stanley Cups), the Los Angeles Kings (1988–1996, including a Stanley Cup final), the St. Louis Blues (1996), and the New York Rangers (1996–1999). Following his retirement, he became the ninth and final player to be ushered into the Hall of Fame with no waiting period, and the first to have his jersey number retired league-wide.

Among his activities since, he has been minority owner and head coach of the Phoenix Coyotes and executive director of Canada’s 2002 gold medal-winning men’s hockey team, and is a restaurateur, winemaker, and philanthropist with his own Wayne Gretzky Foundation. He lives with his family in Westlake Village, California.

Kirstie McLellan Day is the coauthor of the Canadian bestselling hockey memoirs Cornered (HarperCollins, 2011), with Ron MacLean; Playing with Fire (Triumph, 2010), with Theo Fleury; and Tough Guy (Triumph, 2009), with Bob Probert. She lives in Calgary, Alberta.

Start reading 99: Stories of the Game on your Kindle in under a minute.

4.6 out of 5 stars
4.6 out of 5
323 global ratings
How are ratings calculated?
To calculate the overall star rating and percentage breakdown by star, we don’t use a simple average. Instead, our system considers things like how recent a review is and if the reviewer bought the item on Amazon. It also analyzes reviews to verify trustworthiness.

D. Buxman
VINE VOICE
5.0 out of 5 stars Gretzky Scores Again!
Reviewed in the United States on October 21, 2016
Verified Purchase
Even the casual hockey fan knows the name and the legend of Wayne Gretzky and it's hard to separate the person from his reputation as The Great One. This is a wonderful book because it celebrates Gretzky's love and reverence for the game by examining the 99 year history of the NHL through the eyes of its greatest player. The stories of the players that made hockey such a wonderful sport through the early years are interspersed with Gretzky's stories of how those players impacted his development as a person and as a player. As such, this book is not only a terrific work of sports history, but also a fabulous autobiography that yields compelling insights into Gretzky himself. Much like Gordie Howe's autobiography, Mr. Hockey, I was left with an overwhelming sense of just how down to earth some sports superstars can be. Rather than extolling their own virtues, these players constantly talk about Gratitude. It's all about how grateful they are to their parents, coaches, teammates and their fans. If you are sick and tired of the typical ego-maniacal professional athlete, read this book for a breath of fresh air.
Read more
40 people found this helpful
Helpful
Comment Report abuse

Tired Parent
5.0 out of 5 stars "Jesus saves! (But Gretzky scores on rebound.)"
Reviewed in the United States on June 5, 2019
Verified Purchase
Not only could he skate... Not only could he score... As it turns out, he can also write!
The book is an absolutely unputdownable tour de force of sports literature genre. Probably the most eloquent summary of what the book is all about can be gleaned not from the literary reviewers, but from the author himself: "I was lucky enough to play with guys who were in the league [NHL] in the 50's and 60's... I am just one guy, and I was on ice with players who had skated in eight different decades. Through coaches and teammates and guys on other teams ... I made connections to many more. Every player does. Recently, the sons of the guys who were in the league with me have been showing up in the NHL. That's just one more way that the stories of our game come together."
And what stories! Written in a language that is as lively as the game itself, Wayne Gretzky tells the story of the game, players, coaches, managers, owners, teams, arenas, leagues, cities, and even countries... Yes, it is one story of all these many things: from the fabled "Miracle on Ice" (USA vs. USSR, 1980), to heartbreak on ice (LA Kings vs. Montreal Canadiens, 1993); from the humble beginnings of the game in North America, to it's expansion into Europe and formation of the Russian Kontinental Hockey League... What is the smallest hockey arena in NHL? ... Why is Smythe Trophy, named "Smythe" tropy?... Why is Stanley Cup, "Stanley" cup?... As it turns out, when it comes to hockey, every inside story has an inside story of its own, and there is no one better to tell it than Wayne Gretzky.
Personally, one of the most striking features of the book is the style of its narrative. The tone is that of someone who does not need to boast of his accomplishments. It is as if the reader is lucky enough to listen to "one of the guys." And, IMHO, it is that sense of humility that truly earns Mr. Gretzky the title of "The Great One."

If you are looking for tips. This isnt really the book for that but he does discuss how it comes down to Aggressiveness, passion and hard work of course.
Hockey fans and players will love this awesome hockey book by Wayne Gretzky, " The Great One"

Bob Rushok
5.0 out of 5 stars Absolutely GREAT book!
Reviewed in the United States on January 9, 2019
Verified Purchase
I absolutely loved this book - it starts with some amazing stories from the old history of hockey, most very interesting and heartwarming - it appears to me that Wayne Gretzky found a way to mention every single great old star of the game along with many current stars too. The book later goes on Into some of the stories from Gretzky's career too. All told, an absolutely great book!
Read more
2 people found this helpful
Helpful
Comment Report abuse

Amalia Lofthouse
5.0 out of 5 stars A family favorite!
Reviewed in the United States on March 10, 2017
Verified Purchase
I loved this book! We listen to it on CD in the car; so inspiring. We are new to hockey, but our family loves it! Gretzky is a class act. I make my son listen with me, and I'm so thankful for Gretzky's influence on him. We re-did his bedroom in a hockey theme with Greztky quotes I pulled from this book. Thank you #99👍
Read more
3 people found this helpful
Helpful
Comment Report abuse

Michael Semiao
4.0 out of 5 stars History
Reviewed in the United States on June 6, 2017
Verified Purchase
I was surprised that this book ended up in many ways as a historical reference point for the sport of hockey. Pleasantly surprised. The book does cover the career of "99" but does not shy away from the long and deep history of the great sport which is hockey. Well worth your time.
Read more
4 people found this helpful
Helpful
Comment Report abuse

Reviewer from afar
3.0 out of 5 stars A good history of hockey
Reviewed in the United States on August 18, 2017
Verified Purchase
The book chronicles the development of hockey in North America with many personal anecdotes of individual players. It provides a rough framework of the development of the NHL. That said, Wayne is a far better hockey player than he is a writer.
Read more
5 people found this helpful
Helpful
Comment Report abuse

JOCELYN VILLONGCO
5.0 out of 5 stars Great read, even for someone who knows nothing about hockey
Reviewed in the United States on January 29, 2017
Verified Purchase
I don't know much about the game and have a hard time following when I watch, but this book is a page-turner. The stories are so entertaining and I appreciate learning a bit about the game's history in between the stories. The book reads so easily and makes Gretzky comes across as a nice, down-to-earth, sensible, and humble man.
Read more
2 people found this helpful
Helpful
Comment Report abuse
See all reviews

Megan
5.0 out of 5 stars Great Book
Reviewed in the United Kingdom on January 10, 2017
Verified Purchase
Bought this as a gift for my husband and he can't put it down, he is learning more of the games history and it has a lot of interesting anecdotes.
Read more
Report abuse

karen
5.0 out of 5 stars Must read
Reviewed in the United Kingdom on March 5, 2018
Verified Purchase
A must read for any ice hockey fan
Read more
Report abuse

Andrew
5.0 out of 5 stars Greatest hockey book I’ve ever read!
Reviewed in Canada on October 16, 2020
Verified Purchase
I’ve read a lot of books on hockey and this one is by far the best. Dryden’s book 'The Game’ gets a lot of credit for being the greatest hockey book ever written but I enjoyed this one significantly more. If you’re looking for a book all about 99’s life, this isn’t the one. He does bring things back to his career fairly often, but this book is more about what the game has given him over the years with a lot of hockey history throughout. This is worth a read for any hockey fan! Pick it up!
Read more
Report abuse
See all reviews