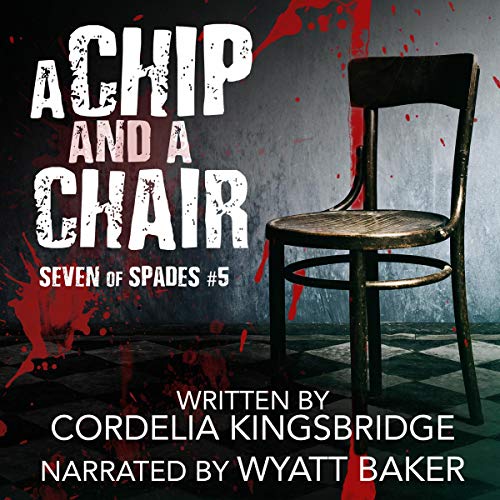 A Chip and a Chair: Seven of Spades, Book 5

List Price: $24.95
You Save: $3.12 (13%)
By completing your purchase, you agree to Audible’s Conditions Of Use
Sold and delivered by Audible, an Amazon company
Share

WMDreader
5.0 out of 5 stars Action packed finale
Reviewed in the United States on March 11, 2019
Verified Purchase
Those who have stayed on this rollercoaster for four books won't be disappointed by the 5th. Dominic and Levi are reunited and their strong connection carries them through the highs and lows of a blockbuster finale: dramatic explosions; huge gun battles; exciting WTF moments; comic dog relief; occasional intense intimate mm sex scenes;...this movie has it all...I mean, this book has it all. There was a time or two that I jumped to my feet at the tension or in surprise.
There is violence, with guns, knives, fireworks, fire extinguishers, toxins and krav maga...There are dramatic Las Vegas style extravaganzas of bad guy/good guy fights and crises and the drama...oy, the drama.
Professionally written and well edited. Likable smart and snarky heroes, moments of humor here and there, personal demons such as gambling addiction and anger management, and, for some characters, serial killing addiction. Terrorist bombings.
Read it, you will like it. Make sure you read the first four books or this won't make any sense at all. Kingsbridge does a good job of just re-hashing barely enough info to re-establish the context, you won't know what's going on without reading the first four.

Like the sound of A Chip and a Chair?
I can recommend Cordelia Kingsbridge's standalone mm romance/thriller: Can't Hide From Me

Gerbera_Reads
TOP 1000 REVIEWERVINE VOICE
5.0 out of 5 stars A finale worth waiting for!
Reviewed in the United States on March 14, 2019
Verified Purchase
The last chapter of Seven of Spades is finally over, and it was spectacular! I so wanted to know the how and the who and yet didn't want it to be over too soon. I fell in love with all the characters that Ms Kingsbridge painstakingly created and nurtured through all five books.

While romance between Dom and Levi took a back seat, I could still feel how much they loved each other, the emotional support that Levi gave Dom when cravings hit him too hard, and the feelings of inadequacy Dominic felt when seeking reassurance from Levi. Levi was battling his rage at the inability to see who the killer was and inability to prevent the tragedies in time. Yet after all they've been through Dom and Levi understood each other more, had the kind of trust that was born from pain and betrayal, and were always in tune. Surrounded by friends and family both men found courage and strength to do what needed to be done.

The Sin City is in chaos. It's time for the secrets long buried come to light. But while Seven of Spades bides their time, Las Vegas is slowly eroded from the inside by crazy lunatics and zealots. The carnage is insurmountable, and what once was considered home and safety does not feel the same. Levi, Dominic and Martine are racing against the clock to save the city they love.

The climax of the story is thrilling, edgy and suspenseful. With the help of Seven of Spades the guys and Leila enter the enemy's stronghold to try and save many lives that are at stake. They succeed but in the end does one sacrifice make up for all the deaths?

All the questions are answered, everything that was a mystery is no more. What is left are people who are trying to survive the loss, the lies and the guilt. The city will rebuilt and move on, the culprits will never see the light of day again, and Levi and Dominic are finally able to slow down, to heal and find the peace that Seven of Spades have robbed them of so long ago. A wonderful finale to a splendid series! Bravo!
Read more
4 people found this helpful
Helpful
Report abuse

T. Jones
5.0 out of 5 stars What a finish!
Reviewed in the United States on April 1, 2019
Verified Purchase
Whoof. I took so long to finish this one (20 days) because I knew it was likely the last one, but also because it gets bonkers-level tense, which for me means I need breaks. But it's SO GOOD. All the way to the very last line good.

I skimmed a few reviews before starting this (I often do that, scoffing at the warnings about curiosity) and LOL'd at one reviewer saying it was unrealistic. On the one hand, sure. It's a lot to think about. But on the other, SoS hasn't been acting alone for quite a long time, so. And all the hate's what we're seeing rise right now - WAY too real. (See break-taking note above.)

Just looked up my review of the first book, Kill Game - I've been reading these for less than a year? It feels like they've always been a part of me. <3
Read more
3 people found this helpful
Helpful
Report abuse

Izen
5.0 out of 5 stars Great series, had to stop.
Reviewed in the United States on October 29, 2019
Verified Purchase
4.8 stars.
I loved this series. I really, wholeheartedly recommend it. It's beautifully written, every character (even side ones) are well done, and I can guarantee the story will drag you by your ears until you finish. It's brilliant, and you should read it.
But I would stop before you read too far into this one. For me, the revelation was... poorly done. It's not that I wasn't surprised, I was disappointed. I'm not giving anything away, of course, and it might suit some people just fine, but for me? Ruined the story. I love these characters, though, and the way the story is written, so I will keep coming back to them -- I'll just stop before I get this far. I'd prefer a cliffhanger to what actually happened.
Read more
Helpful
Report abuse

LovesToSingToo
5.0 out of 5 stars Love this author.
Reviewed in the United States on March 13, 2019
Verified Purchase
Cordelia Kingsbridge never fails to disappoint. I really hate waiting too long to read the end of a series, so I waited until 16 days before the last book dropped until I started reading. Though I still ended up so enthralled, that I read the first 4 too fast; I still had to wait 6 days for the final volume. She always hits all my favorite novel buttons. This one as especially great, because of the characters. You both love and hate all of them equally when the triumph, and make mistakes. Through the bad times and the good; you root for every character, because they all felt so real. The Seven of Spades even had me tearing up at the end. I could read this series forever, and wouldn’t mind another novel into their lives. Until then, I will definitely reread this series. It will be even more fun knowing who did it.
Read more
One person found this helpful
Helpful
Report abuse
See all reviews

JES
5.0 out of 5 stars 5* series
Reviewed in the United Kingdom on March 25, 2019
Verified Purchase
Perfect ending to a brilliant series.
The Seven of Spades is finally revealed (re-reading this series in the future is now a must for me) and Utopia shows how mad, bad and truly dangerous they really are. With twists and turns, arrests and kidnappings, red herrings and loads of action, this last book in the series certainly didn't disappoint.
Levi and Dominic are right in the middle of it all, just as they should be and stronger than ever.
The only thing that put me off slightly were the number of dashes/hyphens (-) and I found myself retracing my steps on a sentence for it to make sense. So saying that it didn't detract me from the storyline, it was just irritating.
Very much looking forward to whatever else this author produces as I am definitely going to continue following her.
Highly recommended.
Read more
One person found this helpful
Report abuse

Rowan
5.0 out of 5 stars One of the best series ever
Reviewed in the United Kingdom on March 13, 2019
Verified Purchase
Hells Bells! I never so that coming. There were so many red herrings that when you find out who the real Secen of Spades is you’ll never believe it. This was a fantastic end to an amazing series. I really did feel for Levi, it was agonising watching him been torn apart, but at least Dominic was there every step of the way
Read more
Report abuse

Christi
5.0 out of 5 stars I can't get enough...
Reviewed in the United Kingdom on April 27, 2019
Verified Purchase
I'm dying. Dead and gone. Without reading one of cordelia's books. I've been reading her creations since she first posted them online and now i no longer function properly. My days are either "Cordelia's books give me life" or "why do i exist?"
Read more
Report abuse

NatKey
5.0 out of 5 stars One of the best series I've ever read!!
Reviewed in the United Kingdom on March 12, 2019
Verified Purchase
I absolutely loved every second reading this book. Same as 4 previous one. Cordelia's writing is perfect, it's make you feel as all those things really happening. And i absolutely adore Levi and Dominic. They are perfect for each other. I feel sad that this is the last book in series.
Read more
Report abuse

Chloe
5.0 out of 5 stars Incredible
Reviewed in the United Kingdom on March 10, 2019
Verified Purchase
Amazing finish to an incredible series. Cordelia Kingsbridge is one of my favourite authors, and she pulled this book together fantastically well. Incredible reveal too!
Read more
Report abuse
See all reviews
Back to top
Get to Know Us
Make Money with Us
Amazon Payment Products
Let Us Help You
EnglishChoose a language for shopping. United StatesChoose a country/region for shopping.
© 1996-2021, Amazon.com, Inc. or its affiliates