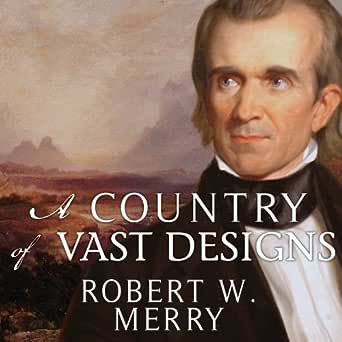 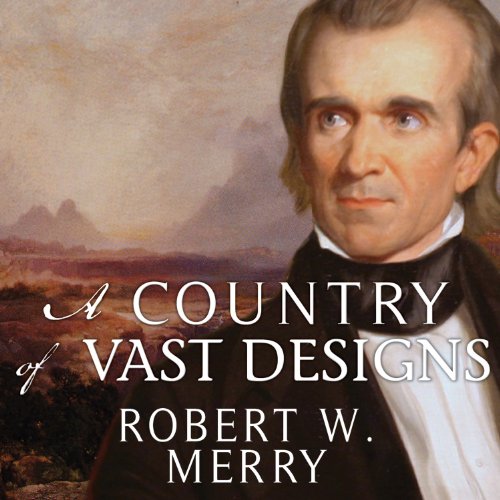 A Country of Vast Designs: James K. Polk, the Mexican War and the Conquest of the American Continent

4.3 out of 5 stars
4.3 out of 5
264 global ratings
How are ratings calculated?
To calculate the overall star rating and percentage breakdown by star, we don’t use a simple average. Instead, our system considers things like how recent a review is and if the reviewer bought the item on Amazon. It also analyzes reviews to verify trustworthiness.
Top reviews

Steven PetersonTop Contributor: Baseball
VINE VOICE
4.0 out of 5 stars James K. Polk and the expansion of America
Reviewed in the United States on May 27, 2017
Verified Purchase
Presidential ratings of greatness by historians normally rank James K. Polk pretty high. This book answers the question: "Why?" Polk was a flawed president, in that his personality was not exactly fit for the office. Nonetheless, he left an estimable record (whatever one thinks of the means to the ends) and he epitomized the spirit of "Manifest Destiny."

He, with votes from a fractious Congress, changed the structure of the tariff, in the end leading to greater revenue for the treasury. He desired to change how the government handled its money, after the death of the National Bank. Both of these accomplishments were hard fought, against multiple factions within both parties in Congress. He also wanted to expand the geographical scope of the United States, with designs on Oregon, California, and Texas (at that point an "independent" country).

This book explores his laborious political efforts to bend Congress his way. In the process of his discussion of such matters, the author also introduces to the reader many of the key figures in the politics of the day--Andrew Jackson, Martin van Buren, John C. Calhoun, Henry Clay, and on and on. Understanding the lineup of key actors allows one to get a better sense of the political dynamics of the time.

The greater part of discussion is on the Mexican War. Here, Polk was essentially trying to coax the Mexican army to strike the first blow, which would justify an American military response. There is a nice description of the war and the ultimate American victory over Mexican forces. The end result--with Oregon and California and Texas and other bits of the southwest added to the United States of America--was a major extension of the country.

Polk had stated that he would serve only one term when he became the first "Dark House" to win the presidency. In that term, he achieved a great deal. His efforts also increased regional tensions as there was heated debate about admission of new territories/states as either slave or free.

At any rate, this is a fine biography of a President with personal limitations but one who had a major effect on the country's history. . . .

Amazon Customer
3.0 out of 5 stars The most unappreciated period and presidency in American history.
Reviewed in the United States on January 24, 2018
Verified Purchase
A little too much about Polk and the drama he endured with his cabinet and congress (nothing changes) and not enough about the events of the day. (the war with Mexico, manifest destiny, and the great American land grab). Also, not a single mention of the 1848 residents of north Texas, west Texas, New Mexico and Arizona. (the Comanche and Apache). These aggressive native American tribes kept the Spanish and Mexican populations sparse in these regions, thus making conquest of New Mexico possible by not firing a single shot. Also no mention of the subsequent Indian wars with these tribes that consumed the American west until 1886. If you want to know everything about Polk, great book.
Read more
12 people found this helpful
Helpful
Report abuse

sgt_maddog
4.0 out of 5 stars Overall, a delightful surprise.
Reviewed in the United States on October 3, 2014
Verified Purchase
I couldn't put this book down. The first half especially was a real page-turner. It lost a little steam later on, but by then I was so invested in the narrative I was anxious to keep reading. Although biased to the Polk/Jacksonian political cabal, and a little light on the military and foreign policy events, it was a nice introduction to the Polk Presidency and the politics of the Mexican-American War. Although he does use primary source quotations with some frequency, it appears as if most of the analysis of these sources is drawn from the secondary sources cited. This is not necessarily a big problem, however, because those sources are well-chosen and authoritative. This is really just a well-written, sufficiently researched graduate paper (albeit in book length). I found it an excellent window into the American past, and will recommend it to all my non-historian friends and historical enthusiasts. In terms of more academic research, since it contains a slight bias, it is useful more as a "source-finder" than a quotable work. Still, very happy to have added it to my shelf, and not at all disappointed with the time spent reading it. Overall, a delightful surprise.
Read more
20 people found this helpful
Helpful
Report abuse

Michael Green
5.0 out of 5 stars the way history should be written
Reviewed in the United States on November 15, 2019
Verified Purchase
I fully expected this to be the latest liberal vehicle for blasting America for the 1840s, but it was not. The presentation here constantly points to the underlying evidence, plainly points out the patterns and policies and the critics' responses, tells where the sources of information were (and are), states openly whether evidence exists or not, declares neither for or against any actions but simply states them in a compelling story that for me never lost its interest. Easy to read yet detailed, excellent for citations, this is an excellent example of scholarly historical writing.
Read more
3 people found this helpful
Helpful
Report abuse

Merry does a good job of covering Polk's presidency, though I was not too taken with his narrative. At times it was flowing, at other times it seemed to bog down. The best parts of this book are recounting Polk's surprising rise to the presidency and the sectional politics that dictated the make-up of his cabinet, as well as the events leading up to the Mexican War. This was certainly a controversial event and one that drew significant criticism of Polk. Merry also fully addresses Polk's attitude towards slavery, which was clearly a nuisance he wished to avoid.

Overall, this is a good telling of Polk's presidency and the Mexican-War-as-viewed-from-Washington. As I said, the narrative could be better in spots, but this is still a worthwhile read.
Read more
11 people found this helpful
Helpful
Report abuse
See all reviews

P Leyshon
5.0 out of 5 stars Great Introduction for the background and events of the Mexican War
Reviewed in the United Kingdom on June 8, 2012
Verified Purchase
I found this book to be a great and comprehensive study of the politics and events of the period. In a well written, easy going style, the author provides an excellent insight into the difficulties facing the USA in the 1840s. The challenges facing Polk's presidency were, on reflection, quite astounding and the way in which the quietly determined man adressed them impressed me greatly. Robert W. Merry is to be congratulated in providing the student of US history during the 19th century with a pitcure of the 1840s period that provides both an in-depth study and a compelling read.
Read more
3 people found this helpful
Report abuse

Key Perspective
2.0 out of 5 stars Fair
Reviewed in the United Kingdom on August 4, 2018
Verified Purchase
Not the most exciting of presidents but well told
Read more
Report abuse

Martin Gregoire
5.0 out of 5 stars A great chapter of American history - and also very readable!
Reviewed in Canada on January 13, 2014
Verified Purchase
An absolute treasure trove of historical information, really well-written and extremely readable, this book went above & beyond my expectations. Highest recommendation.

James K. Polk's presidency (1845-1849) saw the United States' territory greatly increased with the finalisation of the annexation of Texas in 1845, the acquisition of the Oregon Territory in 1846, and the acquisition of [Upper] California and New Mexico in 1848 after a two-year war with Mexico. It also saw some developments over the issue of slavery in the South that would bring the country one step closer to civil war, and knowing that the civil war was almost around the corner, it was interesting to read about some of the key players & events at this period in time.

Robert W. Merry keeps a good pace and explains histories and issues adequately, ensuring that his readership understand the context of the events and the behaviour of the protagonists. He also treats President Polk fairly, in my opinion, by neither demolishing him nor putting him on a pedestal. This even-handedness for me is important, as the lack of bias usually indicates that the information (as presented) is presented fairly.

Like all good history books, it has sparked my interest in other historical figures (e.g. John Quincy Adams, Andrew Jackson) and events (the Louisiana purchase of 1803), and I will be looking into these very soon.

Thank you, Mr. Merry, for a great book!
Read more
One person found this helpful
Report abuse
See all reviews