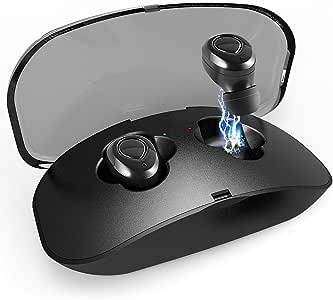 Brand: ABCShopUSA
2.9 out of 5 stars 874 ratings
| 66 answered questions
Currently unavailable.
We don't know when or if this item will be back in stock.

CHOKING HAZARD -- Toy contains a small ball. Not for children under 3 yrs.

Why Choose Our Wireless Earbuds High-quality Stereo Sound Free From Cable Mess Super Lightweight and IXP5 Sweatproof Portable Long Battery Life Charge Box Multifunction One-touch Operation Noise Cancellation Technology Bass Boost and HI-Fi Reduction Technology Broad Compatibility with Bluetooth Enabled Devices Product Features: Battery: Polymer Lithium Battery Bluetooth Version: 4. 2 Operation Range: 10 Meters Weight of Single Earbud: 5g/0. 18oz Mobile Power Supply Charger Capacity: Polymer Lithium Battery DC Charging Voltage: DC5V DC Charge Current (MAX): 250 mAh weight: 0. 17kg / 5. 92ozEarbuds' Size: 0. 59in x 0. 74in x 0. 98in Troubleshooting Steps Have you closed the door of the case so it will charge, otherwise the earbuds will not charge. ★Could you please kindly adjust the position a bit for the earbuds?★If you have tried above 2, if yes and they are still not charging, please contact for free exchange. But please be sure that 100% units has been tested and it will 100% working. ★If you are not Satisfied with your Purchase for Any Reason, Please Feel Free To Contact Us!

2.9 out of 5 stars
2.9 out of 5
874 global ratings
How are ratings calculated?
To calculate the overall star rating and percentage breakdown by star, we don’t use a simple average. Instead, our system considers things like how recent a review is and if the reviewer bought the item on Amazon. It also analyzes reviews to verify trustworthiness.

ss
5.0 out of 5 stars Don’t overthink it. Read this review first.
Reviewed in the United States on November 3, 2018
Verified Purchase
Let’s set the record straight. A lot of reviews I saw complained about the fact the red light didn’t come on when earbuds were charging. The case must be CLOSED for the charge to happen. The reason for this is that the lid of the charging case pushes the earbuds down and locks them on to the charging pins. I have attached a video showing this.

This is great little recharge case that can be used on the go.
•Charge your earbuds in the case and simply unplug, slip into your pocket and go.
•The back has a convenient on/off switch on the back. This allows you to decide when to charge.
•Pairs nicely and with no problems. Simply push the button on the earbuds. A red and blue light will flash and a voice will tell you it is paired.
•Great clear sound.
•Would recommend

william
1.0 out of 5 stars Very poor product
Reviewed in the United States on October 6, 2018
Verified Purchase
We purchased two sets of these and were very excited by the very positive reviews. We are very very disappointed in this product. First, one of the two sets does not seem to be charging property. I had great trouble synchronizing the other set. Finally, when everything seemed to work, I took them out for a spin. Aside from the tinny sound, there was a great deal of static. When I took my phone out of my pocket, the static disappeared; the only conclusion is that the bluetooth reception is so poor that being in a pocket two feet away from the ear buds is not sufficient proximity. I find that completely unacceptable. I do NOT recommend this product.
Read more
92 people found this helpful
Helpful
Comment Report abuse

Amazon Customer
1.0 out of 5 stars Sketchy and not worth it
Reviewed in the United States on October 18, 2018
Verified Purchase
First off, the majority of the reviews on the product page are talking about speakers, rather than wireless earbuds, which makes me question the validity of these reviews. The earbuds themselves aren't terrible IF you get them working, which only happens about 50% out of the box. When they do work, there is a significant audio delay, even while using a brand new flagship phone. The earbuds unpair not infrequently, and do not charge well. When they get to a low battery, they interrupt whatever you're listening to every 10 seconds to tell you, effectively prohibiting you from using them. I wasn't expecting a top rate set of earbuds for the price, but I'd rather go with a more reliable pair from a gas station for $10.
Read more
54 people found this helpful
Helpful
Comment Report abuse

Robert DiRosa
1.0 out of 5 stars DON'T BUY FROM ABCSHOPUSA!!! Scam. Wish I had looked closer before buying.
Reviewed in the United States on November 19, 2018
Verified Purchase
DISCLAIMER: I was pretty angry when I wrote this. All in all, the ear buds aren't actually too bad for FOR THEIR PRICE. Sound isn't anything to write home about but it's decent, battery is okay but nowhere near as advertised, and it works almost flawlessly when you only use the right bud. That being said, they are absolutely atrocious when using both, cutting out frequently on full battery when the phone is literally right next to you. Finally, it's despicable that their trying to deceive people like this and I still don't believe the deserve your money.

*Start of original review*
Hindsight is 20/20. The Q&A is talking about formula and skin cream, the reviews are talking about a different Bluetooth speaker, none of the (few) pictures that actually showed the product said good things, and the brand name is strange. I found a website that estimates the validity of reviews for a product and it found that almost 100% of all the reviews for all of ABCshopUSA's products are suspicious and likely fake. Sure enough, the vast majority of the reviews are taken from other products' pages. As for design, they are difficult to pair initially and disconnect relatively easily. That being said, they are actually very easy to work once initial pairing is done, this being one of exactly three saving graces of this product that is keeping me from (please note the rest of this sentence is actually a joke for emphasis and to highlight that I'm fed up with the product; I do not intend to do either of the following) smashing it and sending death threats to the purveyor, the largest of which being that I actually want a refund and don't think they'll accept shattered bits of silicone and plastic. Reception is terrible and it will cut out and skip when I'm right next to my phone in clear view of it i.e. not occluded, and that's saying noting of how bad it gets if it's even mildly occluded like a hand or blanket. Sound quality is actually pretty decent, but that point is moot since they barely work in the first place. Charging case is mostly plastic and space with very little actual battery and feels very cheap. Indicator lights on the earbuds are supposed to turn blue when fully charged but start off red then just turn off a couple seconds later, with the blue light never coming on. Can't attest to the battery life because I hardly got to use them. I honestly can't believe I bought this in the first place; really embarrassing since I'm usually pretty discerning when it comes to sketchy products. Needless to say I'll be refunding these immediately, but this was truly a waste of shipping. Will be reporting the seller for fraud. DO NOT BUY FROM ABCSHOPUSA!
Read more
25 people found this helpful
Helpful
Comment Report abuse

Nox
2.0 out of 5 stars Useless Earbuds
Reviewed in the United States on November 25, 2018
Verified Purchase
I was deceived by the good reviews when ordering this product, I'm also concerned as to why so many reviews aren't even relevant to these headphones, perhaps that played a role in the ratings as well. The product went "out of stock" right after I ordered it, prompting late arrival, the battery life on these is about 2 hrs for me at full charge, sometimes the lid of the charging container needs to have pressure reapplied otherwise one earbud will stop charging. None of that takes into account the sound as well, as some reviews have mentioned the audio doesn't sync with the video which of course won't be a problem if you're using these strictly to listen to music, but maybe you'll be bothered by the audio cutting out completely at times. Sometimes the sound turns off while the earbuds remain on and without me pausing anything, it comes to the point where I need to turn off the phones Bluetooth, and reconnect them. All in all, these headphones are garbage, and if given the chance, I wouldn't even pay half price for them.
Read more
14 people found this helpful
Helpful
Comment Report abuse

why
5.0 out of 5 stars Love these!!!!
Reviewed in the United States on October 23, 2018
Verified Purchase
These are awesome! The sound is fantastic. Makes me get all into exercising!! Stays put in my ears. The price is even better!
Read more
19 people found this helpful
Helpful
Comment Report abuse

ken analla
1.0 out of 5 stars Only works for 1 hour and can only listen
Reviewed in the United States on September 25, 2018
Verified Purchase
I ordered another type of headphones with great reviews, but on the day of delivery they stated they were out of stock and said these were an upgrade. These are horrible. Battery lasts 1 hour and you cannot use to talk to anyone as they breakup and the person on the other end cannot hear you. I paid more for the other pair and these were priced less and they did not offer me a refund on the difference. These are going back today.
Read more
13 people found this helpful
Helpful
Comment Report abuse
See all reviews