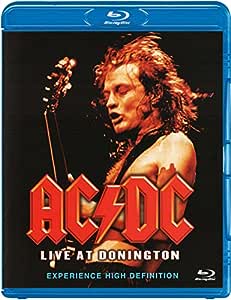 Aussie rockers AC/DC, led by the enduring twin guitar attack of the Young brothers, perform a greatest hits show at The Monster of Rock Festival, Castle Donington, August 17, 1991. 19 tracks in all, ranging from the debut album title track 'High Voltage' to their 1991 hit 'Thunderstruck', all accompanied by the usual sock-blow-offingly spectacular light show.

4.6 out of 5 stars
4.6 out of 5
596 global ratings
How are ratings calculated?
To calculate the overall star rating and percentage breakdown by star, we don’t use a simple average. Instead, our system considers things like how recent a review is and if the reviewer bought the item on Amazon. It also analyzes reviews to verify trustworthiness.
Top reviews

Thomas S.
5.0 out of 5 stars AC/DC concert video - this is the one to get. Period.
Reviewed in the United States on August 13, 2020
Verified Purchase
I own the VHS version of this show since the 1990’s. This Blu-ray is the show to get. It’s superb filmed footage with excellent camera work and many angles / cameras and great sound. The show is the early 90’s lineup so no Phil but that doesn’t matter as part of the AC/DC formula is they make sure any drummer plays on the original Phil style and this show sounds awesome. Chris Slade nails it.

The great camera work and audio and film transfer means watching this will be 10x better than having been at that massive outdoor venue at the time.

Surround sound is in it so if you have a 5.1 or better system your in for a treat. Big screen to see the beauty of the digitized film. Awesome.

Jocko
5.0 out of 5 stars Actually was at this concert at Monstersof rock!!!
Reviewed in the United States on June 19, 2020
Verified Purchase
I was actually at this show live, brought back many memories. Such a great show but they have edited out the brits throwing plastic bottles on the stage. Its a brit thing, was one long ass day with 12 bands. Sadly no more monsters of rock. One of the best shows I ever attended, thanks for the memories!!!!
Read more
One person found this helpful
Helpful
Comment Report abuse

C. Brown
5.0 out of 5 stars These guys are the real deal.
Reviewed in the United States on October 3, 2009
Verified Purchase
I rented this, then bought it. It's the only concert vid I've watched more than twice and it's because the music is produced perfectly on this recording. TURN IT UP! It's definitely best loud.

If you're a guitarist who loves Angus' playing, get this. You won't regret the shots of him shredding, and you'll be amazed at the sound he gets from his wireless GS.

If you're a bassist who loves Cliff's playing, get this. You won't regret watching how the bottom end should be done correctly -- while singing.

If you're a rhythm guitarist who is curious about the brains behind this band, get this and watch how it's done -- with a Gretsch guitar.

If you're a drummer who needs to learn how to play without using ride cymbals or elaborate fills, get this. Chris Slade, the replacement for Phil Rudd (who'd now back in the band) is a master of killin' it without flash or fills. And if you want to see how 1/8th notes are done at 200 bpm, he shows you how to do it, -- for over ten minutes.

If you're a singer who loves Bon Scott, too bad. You'll have to suffer through Brian Johnson's screeching. I know, I know, you either love his singing or hate it. Now you know where I stand.

If you're just a fan who wonders how Angus stays so thin, get this so you can see him run about 5 miles during his performance. It's almost unbelievable.

Kenneth Calhoun
5.0 out of 5 stars One of the best rock concerts ever captured -- looks great on blu-ray
Reviewed in the United States on October 27, 2004
Verified Purchase
One of the best ever, if not the #1 best rock concert dvd ever. Opening with Thunderstruck, this concert rocks on all levels -- it's great to see the huge crowd, the lighting, the camerawork and Angus' guitar work. The drummer gives the best rock drum performance I've seen from any drummer on any concert.
I'd bought the original dvd when it came out years ago, and the blu-ray one recently; it's well worth getting blu-ray as it's sharper and clearer than ever.

I think Chris Slade is the best AC/DC drummer I've ever seen, he rocks on Donnington and I would've liked to seen him on this one too. Slade's work on Donnington is the best drumming I've seen on any concert dvd in history.

This dvd rocks hard and it's one I've played dozens of times, it's great to watch on a big tv or projection system with sound turned Way up. Rock on!

Adam
5.0 out of 5 stars AC/DC at its peak with Brian Johnson.
Reviewed in the United States on January 10, 2019
Verified Purchase
This is the essential, must-have concert for fans of the band with Brian Johnson. The sound and video are both fantastic and are an upgrade from the dvd version. The opening shot of Thunderstruck is worth the price alone.
Read more
2 people found this helpful
Helpful
Comment Report abuse

Frederick Pangborn
3.0 out of 5 stars Horrible Bluray transfer
Reviewed in the United States on May 8, 2017
Verified Purchase
I'm only giving this DVD three stars because of the Blu-ray transfer. Nothing sharp or clear as a Blu-ray should be. Set setlist is great but I was hoping to watch this on the big screen in crystal clarity. Didn't happen.
Read more
3 people found this helpful
Helpful
Comment Report abuse

Stuart
5.0 out of 5 stars I love this bluray, it rocks
Reviewed in the United States on December 7, 2013
Verified Purchase
I'm listening to this right now and can't quit to go do what I'm supposed to on this Saturday. The audio quality on an audiophile setup (Benchmark DAC1 HDR, Audio Research VSi60 tube amp, Martin Logan Theos speakers) is unbelievably detailed. I won't review the songs, as I'm a biased AC/DC fan and love them all on this blu ray disc. The video is first rate. It's like being at the concert. It is well worth the money even if you have these songs on CD.
Read more
One person found this helpful
Helpful
Comment Report abuse

Michelle 88
5.0 out of 5 stars Brilliant Concert
Reviewed in the United Kingdom on March 25, 2019
Verified Purchase
No matter where you see AC?DC they are fantastic. This one at Donington is no exception. A band where the lead singer is second to the mad schoolboy lead guitarist. Angus is amazing as usual with his duck walk, and giving all he's got. If you're an AC/DC fan, or if you're not you can't beat this band live. Plus there's the lovely Rosie, if you are new to AC/DC, have you lived in a forest all your life? Anyway Rosie is amazing as usual, and there's a whole lot of her.
Read more
2 people found this helpful
Report abuse

Meerkat Fan
5.0 out of 5 stars Great concert and DVD
Reviewed in the United Kingdom on October 25, 2013
Verified Purchase
I'd been meaning to buy this video/DVD for about 20 years, having owned the 2-CD album of AC/DC Live from this tour since the early 1990s.

And I'm certainly glad that I've finally taken the plunge. The visuals, with all the different camera angles, keep you interested without feeling that there are too many cuts. And I thought the sound was very good, with good stereo separation.

I went for the 2009 Sony release, and certainly didn't notice any negative instances of overdubbing or re-recording (as mentioned by other reviewers) while I was watching it.

This is a great setlist, ranging from Bon Scott era classics to The Razor's Edge (one of my favourites), which was their most recent album at the time.

One of the hightlights for me was "Dirty Deeds Done Dirt Cheap", which sounds great - I didn't even know that I like it so much!

As well as a few tracks where you can watch a camera that follows just one of the band members for the whole song, extras include a commentary by Angus and Malcolm Young on the event, and a few words of background information on each of their albums.

If you like AC/DC but don't own this, it's time you did! It's the Brian Johnson-fronted line-up at the peak of their powers!

David Wright
5.0 out of 5 stars AC/DC - Playing right on "The Edge" at Castle Donnington!
Reviewed in the United Kingdom on October 22, 2011
Verified Purchase
First watched it on VHS in its original release format and thought it was an absoulutely brilliant gig. The Blu Ray version is obviously better than VHS, though is a little disappointing picture-wise considering it was shot on 35mm film - but that's my only gripe. The audio mix is just bang on the money and sharp as a tack. This gig was part of "The Razors Edge" album tour and presents the band playing with a sharpness and vitality that is quite astounding. This is in no small part due to the contribution made by Chris Slade on drums, who puts in a true 'power performance', delivered throughout with a smile on his face (maybe thinking of the pay cheque!?) and looking as though he was really enjoying himself. A typical example is "Let There Be Rock" - just awesome! Obviously the rest of the band are just as enthusiastic, with both Angus and Brian performing at their best, ably backed by a solid piece of work by Malcolm and Cliff. The actual set list is very similar to the recent River Plate concert, though it's good to see and hear tracks such as "Heatseeker", "Fire Your Guns", "Moneytalks" and of course, "High Voltage". All in all, a great gig. If you have a high quality surround system (and either no/deaf neighbours!) you'll enjoy this.
Read more
One person found this helpful
Report abuse

Cookstown
2.0 out of 5 stars Great performance, poor presentation.
Reviewed in the United Kingdom on September 22, 2019
Verified Purchase
Who ever edited this has never been to a concert. It seems like there is no more than 5 seconds per camera shot before your whisked off to another boring shot of the audience. Makes the show vitually unwatchable. I'll try turning off the video & just listen to the audio.
Read more
Report abuse
See all reviews
Pages with related products. See and discover other items: asia band