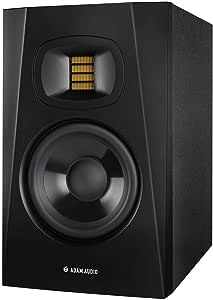 Junior partner in the T Series, ADAM Audio’s affordable line of professional 2-way active studio monitors, the T5V features a 5" polypropylene low-frequency driver that delivers bass extension down to 45Hz, while the company's U-ART accelerated-ribbon tweeter provides pristine highs extended up to 25kHz – quite remarkable for a monitor in this price range. The tweeter's broad, uniform dispersion pattern is assisted by a precision waveguide modeled on the High Frequency Propagation (HPS) waveguide used in ADAM’s premium S Series studio monitors, which provides an impressively wide sweet spot that liberates you from being constrained to a rigid listening position.

MinneMan
5.0 out of 5 stars Big league sound at a small price
Reviewed in the United States on April 19, 2018
Verified Purchase
I purchased the T5V and had them for a week. I decided I wanted deeper bass response and got the T7V instead. Both models are a fantastic value and highly recommended. This review is specific to the T5V.

Until the new T series arrived, Adam Audio speakers were expensive and found only in pro studios. The T series is a low-cost option that brings their ribbon tweeter tech to the masses. These are the first Adam Audio speakers I’ve had a chance to listen to and they are very impressive. I love the tweeters! They are so much better that domes or horns. It took me two days to learn to like them, but once I did, I’ve become a huge fan.

First, the speakers aren’t midrange-focused like all other 5” monitors I’ve ever listened to. I think Adam is using DSP to flatten out the frequency response and it’s quite different from other small speakers in that they try and give you the whole picture with equal emphasis.

Like all small speakers there isn't much deep bass, but everything else (low mids, mids, highs, super highs) is balanced much more like it would be in a large speaker such as a studio main. Acoustic music sounds intimate, detailed and very clear, missing out on some depth in large percussion due to the small woofer. The very open high end really shines on vocals and acoustic guitar.

Second, the imaging is different, and I like it. Mono sounds are phantom centered, Stereo sounds are wherever they belong and not necessarily tied to speaker location, and everything seems forward. The speakers kind of disappear. Upper-low frequencies sound a bit boxy for my taste and make me look at the woofer, but everything else seems to float in front. On electronic music, sometimes the sound seems right at the ear, like headphones. The sound seems to be reaching out to you rather than you reaching for it.

FOR BETTER OR WORSE:

I listened to several song genres trying to get my ears adapted. These speakers sound great on digitally created music such as EMD and pop. Also, they shine on acoustic records that were meticulously recorded and mixed. Most rock and country sounded great, but a few songs sounded a bit off to me. They show the color and texture of a mix more openly than similar small speakers and if the mix has anything odd about it, you’ll hear it right away.

There is no power indication light on the front! I can’t tell if they’re on or not without going behind my desk to look at lights. I've left them on overnight by accident.

The tweeters are the stars and the woofers are decent but not great, so they did seem hyped sounding when I first tested them. It took me several hours of listening to get used to the extended high frequencies. I ended up getting the larger T7V instead and the bass in those is deep and punchy and balances out the amazing tweeters nicely. If you have the extra money and desk space, the T7V are worth the extra $100 per pair.

I have an M-Audio sub-woofer and struggled to get the T5V to sound right in the bass. That’s the main reason I returned them for the T7V. If you have a sub-woofer, you’ll want it in the center between these speakers. I couldn't do that, and the result was I could notice certain sounds coming from the off-center sub-woofer (not a problem with my Event ALP5 monitors I was replacing). I think it’s related to the higher than normal crossover frequency I had to use.

I don't think you can get a better set of truth-telling 5" monitors at this price. These Adam Audio T5V are perfect for a bedroom studio or a small video edit suite. You can get similar-sized speakers for substantially less, but these are in a different league and not directly comparable in terms of how they sound. The highs are so detailed and open and the frequencies so balanced that you get a much better representation of what you are doing. The tweeters aren't fatiguing, and if you have a quiet room you can monitor at low volume and still hear clearly what’s going on.

I definitely recommend the T5V. I also suggest you consider the T7V if your desk space and budget can handle it. I think they sound more balanced due to having deeper bass. Those are well suited for a serious home studio, small control room, or medium size video edit suite. Both the T5V or T7V sound more high-end than their price would indicate and are a tremendous value.

Ivan Tochev
2.0 out of 5 stars The sound is not as it was supposed to be for studio speakers.
Reviewed in the United States on March 18, 2019
Verified Purchase
Amazon service is perfect!
Now about the speakers. I read a lot of adds before decided to buy one speaker for test and compare the performance with my Bose headphones. I used one channel and switched to the other several times with different kind of music.
Not a good performance. When listened to orchestra I could hear the solo and bass, but the middle range was missing. Just noise!
Switching back to headphones I could clearly distinguish different musical instrument.
Returned it.
Read more
6 people found this helpful
Helpful
Comment Report abuse

Mac Collector
5.0 out of 5 stars surprisingly good for the price
Reviewed in the United States on September 18, 2019
Verified Purchase
These are pretty much what I hoped for in terms of their ability to reproduce the high end, which is what people love about Adam monitors. What I didn't expect is that they are also quite lightweight and yet feel solidly constructed. The low end isn't comparable to a larger monitor such as the Adam A7X (more than three times the price of the T5V) but you could compensate with a subwoofer if that's really important to you. For my application of listening to my computer being controlled by a MIDI keyboard, they're perfect. They sit nicely on top of the keyboard and produce a beautiful stereo image. Sometimes I forget I'm not playing a real instrument. I haven't used them to reproduce recorded music too much so I can't comment on that application.
Read more
One person found this helpful
Helpful
Comment Report abuse

Eyevinooze
5.0 out of 5 stars Best option
Reviewed in the United States on February 4, 2020
Great set of studio monitors for a home studio or small space. No muffled sound great on the high end and slightly better on the low end than the Yamaha hs5. Exactly what I was looking for.
Read more
3 people found this helpful
Helpful
Comment Report abuse

James
5.0 out of 5 stars Excellent Studio Reference Sound - Unmatched Price.
Reviewed in the United States on August 14, 2020
Excellent near field studio reference monitoring sound quality. Everything audiophile property is best-in-class -> clarity, transparency, stage, presence, accuracy, detail, balance, on and on and on. Unforgivingly neutral. If you skewed bass, go for T8Vs, otherwise this bass is perfectly balanced with mids and highs.

L D Stickland
4.0 out of 5 stars Sound quality seems great, but the level knob is not detented.
Reviewed in Canada on July 23, 2020
Verified Purchase
For the extra few bucks/cents for a detented (or stepped) knob at the back, this could have been a truly stellar product. It still sounds great, but when you're setting up and need to adjust your levels, not having a notched setting for each level makes it impossible to perfectly match speaker levels. That may sound nit-picky, but these are meant for studios, not a home stereo. If I'm paying this much for the monitors, along with several hundred more for room calibration tools, probably hundreds for room treatments, the least they could have done was notch the knob properly so exact settings could be returned to. If you bump the knob at all, or even with the regular vibration of the cabinet, those settings will go out. I don't really want to calibrate every time I go to add gear and a wire bumps something. I want to set it and have it stay in place.
Read more
Report abuse

Page 1 of 1 Start overPage 1 of 1
This shopping feature will continue to load items when the Enter key is pressed. In order to navigate out of this carousel please use your heading shortcut key to navigate to the next or previous heading.
Back
Next
Pages with related products. See and discover other items: active speaker systems