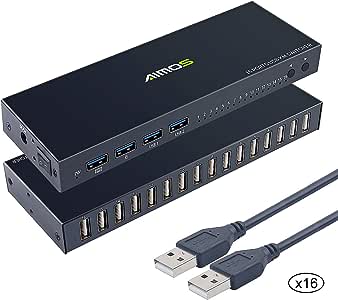 ▶100% Satisfaction Guarantee:
As professional manufacturer, every kit is tested strictly before delivery, If there is any problem with the USB Switch received, please feel free to contact us through Amazon email or this email: aimosus@163.com.


➤Important Note:
Please use Standard DC 5V USB Power Adapter for powering.
The package contains a 5V charging cable, but does not include a 5V adapter (to be purchased).
Any charger with higher voltage output is NOT allowed and may affect the product performance.

4.0 out of 5 stars
4 out of 5
97 global ratings
How are ratings calculated?
To calculate the overall star rating and percentage breakdown by star, we don’t use a simple average. Instead, our system considers things like how recent a review is and if the reviewer bought the item on Amazon. It also analyzes reviews to verify trustworthiness.

Joseph S. Wisniewski
4.0 out of 5 stars Great hubbuh, except for the LEDs
Reviewed in the United States on August 2, 2020
Color: 4x4 USB sharing SwitchVerified Purchase
TL;DR. Everything about this is great except that the little green LEDs are almost impossible to see. If seeing the LEDs is important, buy something else.

Now, on with the show!

A good hubbuh is a godsend for a dev. This one isn't bad: it works well, and it has a solid steel case, good button feel, and a separate button for each PC so you don't need to hit the lone button 3 times to get from 2 back to 1 (there are hubbuhs that cost $4 less that only have one button. Pay the extra $4 and get this one). It has good quality connectors and includes 4 usable 1.5m (5ft) USB A-B cables. And it has 4 ins and 4 outs, so you can plug in a mouse, keyboard, and two other devices that you switch from machine to machine.

It only has one glaring (irony) flaw: you mostly can't see the LEDs. It's possible if you move your head around on a line perpendicular to the hubbuh, but it's not easy. It's not the LEDs: they're bright. There's a ton of emerald green light pouring out the large side vents (they're there for artistic reasons: this device uses no appreciable power and generates no heat) but almost nothing coming out the little holes (1.1mm) by the buttons. I promptly took it apart to find out why (I'm not you, I'm me. Raccoon spirit: everything needs to be taken apart). The LEDs are current "chip" parts, barely visible on the board. They are 15mm from those 1.1mm holes, which means they shoot a little LED beam out the hole.

My first thought was to enlarge the holes, like I did a single-button plastic hubbuh the other day. I took them up to 2mm (OK, close to 2mm. I used a 5/64ths drill, that's 1.98mm). It helped a little, partially from widening the beam, partially for having shiny metal inside the hole, instead of black paint.

The only thing that will fix this is fiber optics. If I had some 2mm plastic rod, I could make some. But I think I'm going to just suffer with it the way it is. I've got it Velcroed to a monitor stand that angles it suficiently towards my eyes that I can see 3 of the LEDs clearly.

Oh, and I call this a "hubbuh" because it combines a "hub" and a multiplexer, a "reverse hub" or "buh". Hubbuhs solve a lot of problems for me. I have 2 workbenches with 6-10 (depending on the week) computers (ranging from a tower PC to laptops, tablets, phones, Raspberry Pies (the plural of Raspberry Pi is either Pi or Pies, it is not Pis. Don't go there) and other embedded systems.

My current bench configuration is an L. One bench is simple: a PC and a tablet. The other is a little more complicated: a Raspberry Pi based prototype of something I'm working on, a Samsung with DeX, a Lenvo laptop.

Each hubbah has a mouse and keyboard and 2-3 computers or computerish devices.

And then there's the man in the middle. There's a macbook on a corner wedge that joins the benches. The monitors have enough switchable inputs so that the tower can drive 1, 2, or 3 of them, and the macbook gets whatever is left over. It's got USB 3 hubs on both inputs, and both hubbuhs are connected to it, so it can use either keyboard.

Even Synergy couldn't untangle this mess. (Most everything on the benches connects to a pair of 8-port gigabit Ethernet switches, more than enough bandwidth for Synergy: it just doesn't work well in this environment).

Amazon Customer
3.0 out of 5 stars You will need to purchase cables separately
Reviewed in the United States on September 21, 2020
Color: 4x4 USB sharing SwitchVerified Purchase
We were about to return this device and give it a poor rating for not working when I decided to try a spare printer cable that I had available. It started to work! The cables that come with this device to connect to the PCs are garbage. If you want it to work, you will need to supply your own cables. Other than that, the switch works as intended.
Read more
4 people found this helpful
Helpful
Comment Report abuse

Lower East Sider
5.0 out of 5 stars Works well
Reviewed in the United States on November 1, 2020
Color: 4x4 USB sharing SwitchVerified Purchase
Like many people, I have been working at home for the past few months. I needed a solution that allowed me to use my existing mouse and keyboard with both my home and work computers.

This switch controls four USB ports but I do not use them all.

The wired remote control is nice to have. I have it tucked between my router and my computer. The buttons on top of the selector unit also work well.

The selector unit is a sturdy looking metal box. My USB transmitters were a snug fit but I was able to wiggle them into place.

There is some cable clutter, which I attempt to hide behind my computer and router. But this switching box allowed me to keep my present keyboard and mouse which I like very much. It was also much cheaper than buying a new multi-channel mouse and keyboard.

One especially nice feature of this switcher is that it will take power from any of the four USB-to-computer ports. So, if only one computer is turned on, the box will still operate. Some switchers take power from only one designated port.

Telerian3
4.0 out of 5 stars Pretty good
Reviewed in the United States on October 6, 2020
Color: 4x4 USB sharing SwitchVerified Purchase
You open this one up, and it is quite simple. Metal construction body, hard clicky buttons, a mysterious Power jack I haven't figured what for.

This version comes with 4x USB-A connections, 2.0, and 4 USB - B connectors that want to lock themselves into place when you install them. Probably for the best, there are not a lot of USB - B connectors out there, but I did find some on my monitor surprisingly. This might be annoying at first, since USB - B seems so dated, but in this is used so you cannot hook it up the wrong way.

It really is simple to install, plug in your switch to the first PC, plug in your Keyboard and mouse, and everything talks. I have concerns based on other reviews of the products I researched before this one. If there is any long term effect to using a KVM switch, but I'm not going to hook an External HDD to it, since I use this for switching between a workstation PC and my Personal PC.

Using an external drive will likely still be trading data like a thumb drive and not be good to interrupt that.

All in all, I think this is a quality product for its price, and if it ever fails and I cannot use backup on the other two connections, I'll update my review here.

Cons: When switching to an Asus Chromebox 3, my USB devices (mouse and keyboard) would not be recognized until I unplugged them from the switch, and replugged them again. This is a deal breaker. Though their Amazon webpage for this device lists Chrome OS, the actual manual that comes with the device does not. Not ready for prime time, in regards to Chrome OS.

Too bad, because I really like this device. But back it goes. If you just need something compatible with Mac and Windows, this should work well for you.
Read more
2 people found this helpful
Helpful
Comment Report abuse

Allen Austin II
1.0 out of 5 stars Constantly cuts out/resets, stopped working after 30 days
Reviewed in the United States on October 23, 2020
Color: 4x4 USB sharing SwitchVerified Purchase
Ordered this device to act as a Keyboard and Mouse switch between my work machine and my Raspberry Pi 4 I use as a home workstation. It has been cutting out about once every couple of hours, where attached devices seem to disappear from the host machine and reappear a second or two later, since day 1. But, that was mostly tolerable. It did this even with aux power plugged in. But as of this morning, the switch is just dead. Attached peripherals don't show up on any of the host machines at all. Not a good buy at any price.
Read more
2 people found this helpful
Helpful
Comment Report abuse
See all reviews