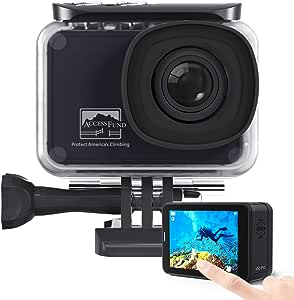 by AKASO
4.3 out of 5 stars 95 ratings
| 31 answered questions
Currently unavailable.
We don't know when or if this item will be back in stock.
› See more product details

What's in the Box:

4.3 out of 5 stars
4.3 out of 5
95 customer ratings
How does Amazon calculate star ratings?
Amazon calculates a product’s star ratings based on a machine learned model instead of a raw data average. The model takes into account factors including the age of a rating, whether the ratings are from verified purchasers, and factors that establish reviewer trustworthiness.

John
2.0 out of 5 stars horrible for anything requiring moderate recording times
Reviewed in the United States on May 6, 2019
Verified Purchase
I bought this camera as a type of security cam for my motorcycle while riding (people love to blame things on motorcyclists when it's actually their fault). I don't really care about sound quality, since it's mostly wind anyway, but I do care about it able to run for long periods without issues. This isn't the case with this camera.

I mounted the camera onto my stem, just as I had the older camera that had been in use for many years without issue. inside it's waterproof box, I figured it'd be just as fine as my old camera. first thing I noticed is that this camera DOES NOT have a micro USB port to enable power from the bike (WHY NOT?!?!?!?!?). Eh, it still has three batteries, so I figured those might do for now.

I set the camera up for wide angle but brought the image size down from native 4K to 1080p @30fps (would go lower, but thought I'd try out 1080 for once!). Image stabilization turned on, since I know my bike can vibrate a lot. After setting everything up, along with date stamps for the recording, I went for a bit of a ride.

The first battery lasted a full on 12 minutes before dying off. I pulled off, opened the case, pulled the battery out, and placed a freshly charged one in its place. This whole ordeal took about 5 minutes, since I was carrying the batteries in my vest pockets.

Soon after, the second battery died in about 15 minutes. Out came the third battery to be placed in. Again, another 5 minutes on the side of the road.

Third battery lasted a full on 15 minutes. with all three completely drained, I headed back to the house to recharge (which took over two hours to do for all three batteries!)

All together, I had less than 45 minutes on the motorcycle before all three batteries completely drained. Most of the time, my rides last for at least 2 to 3 hours. This is completely unsatisfactory.

After fully recharging, I tried again, thinking the batteries might get better after some use. This was also not the case. another 15 minutes per battery. I tried with the lowest possible resolution setting (720p), and yet it only lengthened the battery life up to a total of 20 minutes each. I cannot be stopping every 15 to 20 minutes while on the highway or doing any kind of off-road traveling. This might be okay if it were a camera on a drone (which is only in the air for about 10 minutes at a time), but not for anything other than that.

I have never owned a GoPro branded camera, but if the GoPro has any better battery life, or at LEAST a way to plug in to external power, I would HIGHLY SUGGEST to go with it or another manufacturer. Without any way to connect this camera to external power, it is useless for my needs. A hundred and sixty of my hard earned dollars completely wasted.

The upside to this: the video was actually quite good... if I actually wanted to do something with said images. I do not, as it is only for security and proof that other people are not looking out for motorcyclists (i've been in three wrecks due to others' inability to properly follow traffic signs, and a camera proved me correct in all three).

For those that would think "just don't ride a motorcycle!", well the idea of using a security camera comes in handy when driving a 4-wheel cage also! Again, for the ones that are unable to follow the traffic signs, or look for oncoming, or even those that just want to be mean and brake check YOU while on the highway!

Traveling On
5.0 out of 5 stars Akaso V50 Pro
Reviewed in the United States on August 17, 2019
Verified Purchase
I've owned my Akaso for 4 months now. This little camera is simply awesome! I am not a professional by any stretch, nor am I advertising this camera, nor was I paid anything for my review, but bought it when I was looking for a camera that I could take with me anywhere(it even films under water, no sound of course, since it has an external microphone which can't pick up while enclosed in a waterproof case). This fit the bill for me, and when I looked at all the digital cameras out there for 100's of dollars, and the pain of carrying a camera bag with you, and the limitations of a strictly hand held or tripod mounted unit, I just couldn't see it. I take a lot of video at 1080p 60 fps strictly amateurish, but with great success, of my family, grandchildren, and all sorts of events. I was working on a project today that I wanted to share with my son who lives 100's of miles away - then I thought, there is a way he can do the project with me! Why not video it, talking him through it, and send him the micro card - So I did. With an inexpensive accessory kit and a camera stick to mount the camera on, you can film from many different perspectives (off to the side, selfies while facing the camera), taking your viewer on a tour of your home, overhead, if your camera stick is long enough, you can hold this little camera next to something on the ceiling and film it, or at ground level! Image stabilization works great! Talk the viewer through it all(sound quality is amazing). All features of this camera work exactly as advertised.
Today you can pick up 64 GB micro cards very reasonably, $5.00 or less. Take vacation videos, copy to your computer for your record, then send the card to your family member to "go on vacation with you" There are countless uses for this camera, start a vlog, film projects, vacations, family events and send card to family members who couldn't attend - and many more. I would not hesitate to recommend the Akaso V50 Pro to anyone. Get extra batteries, cause once you experience the video and sound quality of the Akaso V50 Pro, you can easily burn 2 batteries in a very short period of time. Mine came with 3. Now just go and buy one and start enjoying!
Read more
2 people found this helpful
Helpful
Comment Report abuse

3ric Johanson
1.0 out of 5 stars Not for diving
Reviewed in the United States on March 3, 2020
Verified Purchase
I purchased a pair of these for diving. Having not exceeded the rated depth of 30meters (100feet) both of them flooded or leaked on every dive. The cases are defective by design.

I performed some investigating on how the water was getting in. The bottom edge of the door doesn't get any compression on the oring. The button orings are fine (I added some oring lube for them so they pressed easier). The lens oring wasn't screwed down all the way, and was leaking badly when I got both of them (tighten 6 small Phillips screws from inside). I could not figure out how to secure the door better, it's just defective. Tape didn't work.

In the end, both of them died from salt water exposure over 8 dives. Extremely disappointed with the cases.

The video quality was ok at 4k/30, but the UI is a mess with really inconsistent menu behavior. (Using buttons only).
Read more