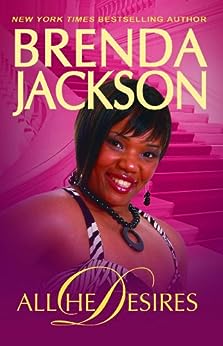 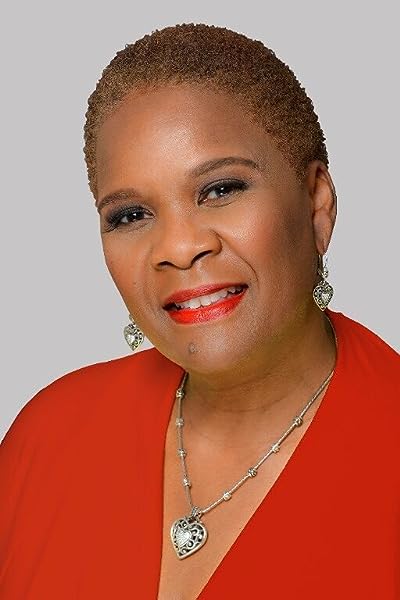 ALL HE DESIRES (THE SAVOYS Book 1) Kindle Edition

by BRENDA JACKSON (Author) Format: Kindle Edition
Book 1 of 1: THE SAVOYS
See all formats and editions
Sorry, there was a problem loading this page. Try again.
Four stories - Bare Essentials, Tempting Fate, The Perfect Seduction and Simply Wonderful - on the coluptuous woman. More to hold. More to love.
Simply Wonderful is a never before published story on the Savvoy family.
Read more
Previous page
Next page
Next 1 for you in this series See full series
Total Price: $9.99
Books In This Series (1 Books)
Complete Series 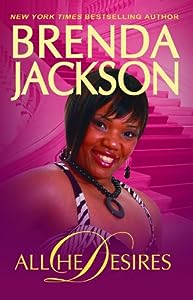 A New York Times and USA TODAY bestselling and award-winning author of more than 100 romance titles, Brenda divides her time between family, writing and traveling . Readers may write Brenda at P.O. Box 28267, Jacksonville, Florida 32226, by email at WriterBJackson@aol.com or visit her website at brendajackson.net.

Brenda Jackson, New York Times and USA Today Bestselling author of over 100 novels and novellas, was born in Jacksonville, Florida. She earned a Bachelor of Science degree in Business Administration from Jacksonville University. She married her high school sweetheart, Gerald, and they have two sons, Gerald Jr. and Brandon, ages forty-three and forty-one, respectively. She is an active member of Delta Sigma Theta Sorority, Inc. Her professional writing career began in 1995 with the release of her first book, Tonight and Forever. Since then she has written over 100 titles, which includes a made-for-television movie by BET, One Special Moment as well as the movie, Truly Everlasting by her own film company; and A Brother's Honor by Passionflix. She was a 2012 NAACP Image Award Nominee for Outstanding Literary Fiction for her book, A Silken Thread; and was named Romance Writers of America’s Nora Robert’s Lifetime Achievement Award recipient for 2012. In 2020 she formed a partnership with Hollywood's Bobby Smith, Jr (Jason Lyric's fame) to bring more of her books to the movie screen.

Amazon Customer
5.0 out of 5 stars Voluptuous/plus-size=sexy
Reviewed in the United States on October 4, 2018
Verified Purchase
In a world of romance where the heroines are often a size 2, Brenda Jackson knocks it out of the park with All He Desires. She skillfully and beautifully makes sexy synonymous with voluptuous, plus-sized women. Thank you, Brenda, for showing that there are hot men out there who love a woman with something to hold onto, and appreciate the total package. Everyone deserves love, and I look forward to reading more stories like these.
Read more
5 people found this helpful
Helpful
Report abuse

Ms. Book Lova
5.0 out of 5 stars All they desire
Reviewed in the United States on June 4, 2013
Verified Purchase
I have been a fan for so long. If you want a good love story with just enough heat and desire and then a few twists and turns... Brenda Jackson novels never disappoint. These stories were so good and just plain ole loving. The wonderful love affair of Judge Kincaid.. that was a hot story too.. to watch Blake and Justice fall in love.. that was a hot and sexy story as well. The rekindling love of Tyler and Megan. So very sweet. I was actually excited during that story. The last story though... definately it started out with laughter and ended with love as only Brenda Jackson can deliver! Job well done again...
Read more
4 people found this helpful
Helpful
Report abuse

Amazon Customer
5.0 out of 5 stars all he desires was great, i was not aware her sister was a madaris family friend.
Reviewed in the United States on May 13, 2014
Verified Purchase
i was very interested in how brenda jackson connects her stories to different family members and their friends it keeps you thinking, her stories are good for the brain, I have all of her books except the reprints. I love it and I have to go back to read other books related to this book ( Essence Of Desire) for the Kincaid sister Michelle. Keep writing stories and I will keep purchasing them by BJ..
Lanie B
Read more
5 people found this helpful
Helpful
Report abuse

Tricey
5.0 out of 5 stars You Go Girls!!!!!!!!!!!!!!!
Reviewed in the United States on October 10, 2012
Verified Purchase
I really enjoyed reading this series. The women were beautiful and very sure of themselves. It was refreshing to see handsome/gorgeous men attracted to women for reasons other than petite sizes. As always, Mrs. Jackson makes her characters interesting and very believable. I read the book in a day and a half (only because I had my grand-childrens). EXCELLENT!!
Read more
13 people found this helpful
Helpful
Report abuse

Kindle Customer
5.0 out of 5 stars Wonderful!
Reviewed in the United States on October 18, 2012
Verified Purchase
I so enjoyed this book and all of the stories that were written. It was well worth the $10.00 and I would highly recommend it. It was done in the fashionista style I am used to coming from one of my favorite authors! Just enough spice in the bedroom with humor, seriousness and all the other emotions that go along with her writing style. I love Brenda Jackson and I say keep up the great work, I will keep reading. I am a fan for life!
Read more
2 people found this helpful
Helpful
Report abuse

Yvonne Harris
5.0 out of 5 stars All She Desires
Reviewed in the United States on November 1, 2012
Verified Purchase
This book was a fast read. Enjoyed the stories and was glad to see she was writing about full figured women. It seemed more realistic because every woman has their own body type. Not all women are small sized. Beauty is also in the beholder and I liked the fact that she introduced to this story that there are men who appreciate women of full size. Liked this book and can't wait for the next one concerning this family.
Read more
One person found this helpful
Helpful
Report abuse

Michele Hallahan
5.0 out of 5 stars Four wonderful stories,
Reviewed in the United States on May 6, 2013
Verified Purchase
I loved this book. It was good to read some romantic stories where the heroine of the book wasn't the normal skinny "he wrapped his hand around her tiny waist" character. These were thick, beautiful, smart, desirable women...real women. I enjoyed all of the stories with Simply Wonderful being my favorite. Who said plus sized can't turn up the heat? They set it on fire in this book.
Read more
One person found this helpful
Helpful
Report abuse

Kindle Customer
5.0 out of 5 stars Compelling reading!!!!
Reviewed in the United Kingdom on June 22, 2014
Verified Purchase
I gave this book five stars as it was a brilliant book. I liked the way that there's 3 different stories in one book. It all flowed nicely. The characters were believable which is important in a romantic novel. I would recommend this book to my friends who enjoy romance novels with a bit of a twist.
Read more
One person found this helpful
Report abuse

Mrs. J. Robinson
5.0 out of 5 stars Brilliant!
Reviewed in the United Kingdom on January 20, 2013
Verified Purchase
Excellent the book is exciting & love all Brenda Jacksons novels, they are the best - you feel that you are part of the family!
Read more
One person found this helpful
Report abuse