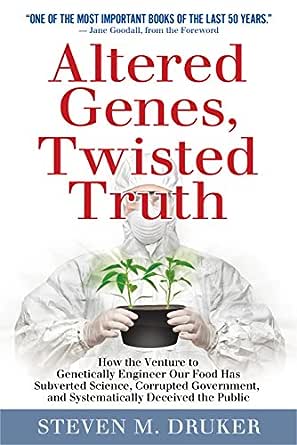 “Without doubt, one of the most important books of the last 50 years. I shall urge everyone I know who cares about life on earth, and the future of their children, and children’s children, to read it. . . . Steven Druker is a hero. He deserves at least a Nobel Prize.”--Jane Goodall, Ph.D. (from the Foreword)

“A fascinating book: highly informative, eminently readable, and most enjoyable. It’s a real page-turner and an eye-opener.”--Richard C. Jennings, Ph.D., Department of History and Philosophy of Science, University of Cambridge, UK

“This incisive and insightful book is truly outstanding. Not only is it well-reasoned and scientifically solid, it's a pleasure to read--and a must-read. Through its masterful marshalling of facts, it dispels the cloud of disinformation that has misled people into believing that GE foods have been adequately tested and don't entail abnormal risk.” --David Schubert, Ph.D. molecular biologist and Head of Cellular Neurobiology, Salk Institute for Biological Studies

“Altered Genes, Twisted Truth is lucid, illuminating, and alarming. As a former New York City prosecutor, I was shocked to discover how the FDA illegally exempted GE foods from the rigorous testing mandated by federal statute. And as the mother of three young kids, I was outraged to learn how America’s children are being callously exposed to experimental foods that were deemed abnormally risky by the FDA’s own experts.”--Tara-Cook Littman, J.D.

“Steven Druker has written a great book that could well be a milestone in the endeavor to establish a scientifically sound policy on genetically engineered foods. The evidence is comprehensive, clear, and compelling; and its credibility is irrefutable. No one has documented other cases of irresponsible behavior by government regulators and the scientific establishment nearly as well as Druker documents this one. His book should be widely read and thoroughly heeded.”--John Ikerd, Ph.D. Professor Emeritus of Agricultural and Applied Economics, University of Missouri – Columbia

“Altered Genes, Twisted Truth will stand as a landmark. It should be required reading in every university biology course.”--Joseph Cummins, Ph.D. Professor Emeritus of Genetics, Western University, London, Ontario

“Steven Druker's meticulously documented, well-crafted, and spellbinding narrative should serve as a clarion call to all of us. In particular, his chapter detailing the deadly epidemic of 1989-90 that was linked with a genetically engineered food supplement is especially significant. I and my Mayo Clinic colleagues were active participants in the attempt to identify the cause of this epidemic. Druker provides a comprehensive analysis of all the evidence and also presents new findings from our work. Overall his discussion of this tragic event, as well as its ominous implications, is the most comprehensive, evenlybalanced and accurate account that I have read.”--Stephen Naylor, PhD CEO and Chairman of MaiHealth Inc., Professor of Biochemistry and Molecular Biology, & Pharmacology Mayo Clinic (1991-2001)

“Steven Druker has done a beautiful job of weaving a compelling scientific argument into an engaging narrative that often reads like a detective story, and he makes his points dramatically and clearly. The examination of genetic engineering from the standpoint of software engineering is especially insightful, exposing how the former is more like a ‘hackathon’ than a careful, systematic methodology for revising complex information systems. I will recommend this book to my friends.”--Thomas J. McCabe, developer of the cyclomatic complexity software metric, a key analytic tool in computer programming employed throughout the world

“Based on over 30 years of teaching computer science at universities and on extensive experience as a programmer in private industry, I can state that Steven Druker has done an excellent job of demonstrating the recklessness of the current practices of genetic engineering in comparison to the established practices of software engineering. His book presents a striking contrast between the two fields, showing how software engineers progressively developed greater awareness of the inherent risks of altering complex information systems – and accordingly developed more rigorous procedures for managing them – while genetic technicians have largely failed to do either, despite the fact that the information systems they alter are far more complex, and far less comprehended, than any human-made system.”--Ralph Bunker, PhD

“Steven Druker has written one of the few books I have encountered, in my many years of public interest work, with the capacity to drive major change in a major issue. What Ralph Nader’s Unsafe at Any Speed was to the auto industry and what Rachel Carson’s Silent Spring was to synthetic pesticides, Altered Genes, Twisted Truth will be to genetically engineered food. It is profoundly penetrating, illuminating, and compelling, and it could stimulate a monumental and beneficial shift in our system of food production.”--Joan Levin, JD, MPH

Steven M. Druker is a public interest attorney who initiated a lawsuit that forced the U.S. Food and Drug Administration (FDA) to divulge its files on genetically engineered foods. This exposed how the agency had covered up the warnings of its own scientists about the risks, lied about the facts, and then ushered these foods onto the market in violation of federal law. He has served on the food safety panels at conferences held by the National Research Council and the FDA, presented lectures at numerous universities, met with government officials throughout the world, and conferred at the White House Executive Offices with a task force of President Clinton’s Council on Environmental Quality. --This text refers to the audioCD edition.