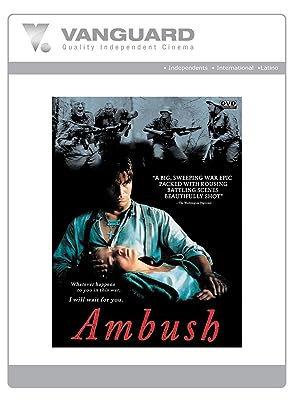 (100)6.81 h 57 min200718+
Ambush takes place in the first days of WWII in Russia Karelia by the Finnish border. A young lieutenant is sent on reconnaissance mission behind enemy lines, leaving his beautiful fiancee behind. During his mission he receives tragic news that she has been killed by the Russians. Now, the war is personal. The young, blue-eyed officer changes into a killing machine. Finnish w/English subtitles.

Tim ByersReviewed in the United States on January 23, 2016
3.0 out of 5 starsA well acted and scenic but tragically lopsided story
Verified purchase
I generally love non-American movies in general and those dealing with WW2 in specific, which gives me pause to rate this only 3 stars. Ambush (perhaps the title is not well translated) features a Finnish soldier leaving his fiancée to fight the Russians. But she, the nurse, is sent to the front too and they enjoy a surprise reunion before he secures transport for her and her fellow nurses to leave the danger. He leads his platoon of bicycle troops through the forests on a behind the lines mission that takes on an ominous quality. The film's title comes not from what happens to him but rather to his fiancée, and this leads to why in the end I took away two stars. His story is compelling enough; leading a band of young and veteran soldiers deeper and deeper into enemy territory. But his fiancée's story is almost completely missing. It seems like a huge gap, which leaves it as mere plot device. This, along with a somewhat cheesy final battle sequence, are weaknesses that compelling acting and scenery can't overcome.
2 people found this helpful
Report abuse

Gabe MartinReviewed in the United States on April 13, 2015
4.0 out of 5 starsCloser to a romance than a war-adventure
Verified purchase
I'm a historical war nerd. I re-enact (Viking mostly) and play historical war games. I'm also of Finnish decent and have gained a new interest in Finland's involvement in WWII. On top of that I just started playing Bolt Action and am painting up a Finnish platoon so...

Just found out about this movie and watched it. Great inspiration for colors and gear and such for painting up my miniatures. Also it gave me a good idea of how "life" was in the period - Karelian offensive to take back what the Soviets took a few years earlier in the Winter War.

The movie? It's a romance flick really, with war in it. Not a rousing war adventure like Fury or some such. I was OK with that. It still delivered and gave me some good inspiration for more reading and research.

DeputyReviewed in the United States on March 8, 2013
5.0 out of 5 starsWell done movie
Verified purchase
Not a lot of movies on the conflicts between Finland and the Soviet Union. This one is quite good and based on a true story. Character development is good and the uniforms and weapons are accurate representations of what was actually used. The end battle is awesome and compares favorably with more popular war movies.
Report abuse

Gary L. ManningReviewed in the United States on May 15, 2016
5.0 out of 5 starsGreat Part of A War We are not Aware Of.
Verified purchase
Very good acting a well acted movie. I use subtitles and this movie flowed like it was in English.
Report abuse

ChristopherReviewed in the United States on January 7, 2013
3.0 out of 5 starsStep It Up
Verified purchase
I feel that the scenes of the movie didn't fit or flow together. The realism was lacking. I wasn't expecting Saving Private Ryan, but the tactical movements of the Soldiers were not convincing at all. When securing an area the first thing done is set up 360 security, not pose in front of the camera. The actors were not believable as soldiers. The 'hold a machine gun and scream like Rambo' has been done too many times. The Finnish Russian conflict is one of the most amazing chapters of WWII. I wish more movies were available on this moment in history. At the end of the movie I didn't know if it was really worth spending the money on.
Report abuse

Matt BerengerReviewed in the United States on March 26, 2002
5.0 out of 5 stars... Hardly a typical war film
Verified purchase
I saw this movie at the European Film Festival at the Kennedy Center in Washington, D.C. The film is excellent and is hardly just another war film like Hamburger Hill, Platoon, etc. You will get caught up in the lives of the soldiers who travel on bicycles through the Finnish woodland experiencing events such as booby traps and ambushes. In addition, you'll appreciate the tender love story that's woven into the storyline. It's a relief to know this movie is coming to the United States in the DVD format ... it deserves to be seen!
39 people found this helpful
Report abuse

CassandraReviewed in the United States on February 6, 2011
5.0 out of 5 starsAMBUSH
Verified purchase
AMBUSH is a very powerfully moving film! The actors are 5 star and the director as well as the photography. It is indeed a similar amazing film as "Enemy At The Gates"! With my Finnish Heritage I was truly impressed as I am related to Carl Gustoff Mannerheim and have always wanted to see the details of how and why the Finnish wars were fought!! A must buy romantic war epic!
3 people found this helpful
Report abuse

Loves to troubleshootReviewed in the United States on November 2, 2016
5.0 out of 5 starsfins repell overwhelming force...
Verified purchase
famously fierce fins fight fearlessly for freedom for fatherland ....
Report abuse
See all reviews
Back to top
Get to Know Us
Make Money with Us
Amazon Payment Products
Let Us Help You
EnglishChoose a language for shopping. United StatesChoose a country/region for shopping.
© 1996-2021, Amazon.com, Inc. or its affiliates