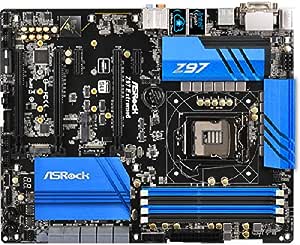 3.8 out of 5 stars
3.8 out of 5
122 global ratings
How are ratings calculated?
To calculate the overall star rating and percentage breakdown by star, we don’t use a simple average. Instead, our system considers things like how recent a review is and if the reviewer bought the item on Amazon. It also analyzes reviews to verify trustworthiness.

cat1092
4.0 out of 5 stars Solid MB choice for a Haswell build!
Reviewed in the United States on November 3, 2016
Verified Purchase
Nice motherboard, though some of the technology is a bit dated (2014 item, it's almost 2017), the main reason why I left 4 stars.

While the MB has some configuration, and a lot more than that of a OEM PC, it still leaves more to be desired, not enough settings for enthusiasts. Other than that, it installed well in a Fractal Design Core 3300 case, running an i7-4770 pulled from a XPS 8700, and 32GB RAM from the same PC, had Dell included two 4 pin power pins for CPU's, wouldn't had built my own, the i7 was starved for power.

That's not the case with this MB, which has ample connections for much everything. One plus if one's running a single GPU, then the 2nd
PCIe 3.0 slot can be used for install with either the Lycom or Addonics adapter for M.2 SSD's, this gets it away from the heat of the MB, and every digit drop in Celsius counts towards longevity for an expensing Samsung 950 PRO M.2 (soon will be 960 PRO & EVO offerings). This allows one to use components on the x4 socket w/out speed penalty, such as, though not limited to, a PCIe wireless/BT combo with external antennas.

I was going to do a X99 build, and I foolishly listened to a friend who stated that CPU's with built in graphics are the best. How wrong that proved to be, would have double the number of PCIe lanes, even with the lowest cost option (about $389 if no promo offered).

For a Haswell build, this MB is unbeatable as far as setup goes, while it has it's caveats (what doesn't?), it's also a great board for the money. One last thing I need to add. Check for bent pins as soon as received, I was burned by a competitor, because I was purchasing components as was able to save & on promo, and filed for rebate before testing, which disqualified me for a swap (may be that way here also). Yet the good one came from Amazon, and I'll surely be linking more folks to the site. As an Advisor on a major Tech forum, many asks me about hardware, what to purchase, where to buy. Amazon did what their major competitor didn't (who'll I'll not name) in delivering me a sealed product that works & all accessories included.

David
5.0 out of 5 stars Great Motherboard
Reviewed in the United States on April 13, 2015
Verified Purchase
Posting this review as a counter to the unfortunate and unfair 1-star review someone else posted (simply because they couldn't get SLI to work).

This is the Extreme6 from ASROCK. It's highly rated by Tom's Hardware and a number of other outlets, and it has kept that position for quite a while. Personally, I couldn't be happier with it. I used this to replace an older (~2009) motherboard which eventually died when a glass of water mysteriously ended up inside my case. Oh, my, how times have changed. The BIOS has mouse support, can automatically go online and check for updates and update the BIOS if need be on the fly; it can also put the network drivers somewhere on your hard drive (at which point Windows can figure out the rest of the drivers for itself), which is fantastic. On top of that, during the boot sequence there is a small LED display which lets you know where the motherboard is in the boot process, which helped me diagnose a bad stick of RAM.

The system has pre-sets for OC'ing, and I picked one (4.2G on the 3.5G i5-4690K( after installation of the system and haven't had to fiddle with it at all (nor have I had a single game or app which I thought 'boy this appears to be limited by the CPU). I also slapped an R9 290x in there, and have had no problems.

Admittedly I have not used many of the advanced features of this board (M.2, or dual-ethernet ports), but those which I have used worked perfectly. But honestly if you're looking for a motherboard I'd suggest doing research off of Amazon. If you are wondering if this is, in fact, the Asrock z97 Extreme6 highly reviewed everywhere (as I was due to the lack of reviews), it indeed is.
Read more
21 people found this helpful
Helpful
Comment Report abuse

EDIT: I had to edit my original evaluation, lowering the the overall rating from a 5 to a 4. The Intel RJ45 port became flaky, providing only about 10% of the bandwidth available at about the 10 month mark, but the Realtek RJ45 port still works fine. I purchased a separate PCIe network card just in case I need it.
Read more
3 people found this helpful
Helpful
Comment Report abuse

However, I have disabled the ASMedia SATA controllers, as other reviewers seem to say they are flaky. I am only using the Intel chipset SATA controller ports. Read the manual carefully to identify non-intel SATA ports. (As I recall, they have an "A" in them printed on the pcb)

The only con I have, which is minor since I don't have SLI/Crossfire, is the extra power molex connector isn't really accessible in most mid-tower cases. The Define R5 case seems to allow you to use it if you use a right angle connector. I have one shipping to me; I will update my review for this. Theoretically you could desolder this connector and put your own on, but I will not do that.
Read more
3 people found this helpful
Helpful
Comment Report abuse

Skip
5.0 out of 5 stars The BIOS interface is great.
Reviewed in the United States on May 15, 2015
Verified Purchase
I installed a 4690K processor, GeForce GTX 960 Video adapter, two 8GB sticks of DDR3 2400Mhz RAM, 840 EVO SSD, and everything works perfectly together. I Currently have Windows 7 running on this build. Between ASRock's support site and Nvidia's support site I didn't even have to use driver media, other than to get one of the NICs going for internet access. I've been running this build for maybe a month now and I've had zero issues. It never tells me "no"! The BIOS interface is great.
Read more
5 people found this helpful
Helpful
Comment Report abuse
See all reviews

j
4.0 out of 5 stars Intermittent stuck in POST bug. --- FIXED by BIOS update
Reviewed in the United Kingdom on December 20, 2015
Verified Purchase
Sometimes will not finish POST, ie gets stuck on early boot up, turning off power supply for 10 secs always fixes it, but its a bit annoying.
Still the same after latest BIOS update.
You will see the diagnosis led get stuff at different numbers.
Pressing reset doesn't work, it just gets stuck again, and again, until you cycle the power.
If you switch of at the wall after powering down on a night then you will be fine, but who does that...?
Everything else is amazing.

Chris Mahon
4.0 out of 5 stars Good solid board
Reviewed in the United Kingdom on January 21, 2016
Verified Purchase
Good solid board, took a while for it to recognise my 2 M.2 drives and after OS was loaded to actually get back into the set up, it hung on A9. Went on the ASRock site for the board and did a BIOS update which solved the problem. I still need to tweak the board as I'm not getting anywhere near the promised 32GB/s from the Ultra M.2 slot, even though I have a Samsung SM950 M.2 NVMe 512Gb installed in it.
Read more
One person found this helpful
Report abuse

Darryl
5.0 out of 5 stars Fantastic motherboard all round
Reviewed in the United Kingdom on January 20, 2016
Verified Purchase
I couldn't be any more impressed by this motherboard, it's just a motherboard built by people who clearly no an incredible amount about computers and also have a love for them. The only drawback I can think of is it only has 2 slots on the motherboard for plugging in USB 2.0 ports, and although this technology is now obsolete, there are a few pieces of hardware that still don't perform perfectly on USB 3.0 and so it would be logical to include at least 3 slots.
Read more
Report abuse

Adam Ziolo
5.0 out of 5 stars Nice feature in bios, great for overclock.
Reviewed in the United Kingdom on December 17, 2015
Verified Purchase
All working perfect. Was able to overclock my i5 4690k to 4.8Ghz without problems.
Like the feature in bios to adjust the fan speeds according to the CPU or the motherboard temp. So all my fans are idle at 5% most of the time. They slowly kick in when temp is going up and you can set what speed on what temp it should be. Also sound is very good quality. Really impressed with it.
Read more
One person found this helpful
Report abuse

k.darke
5.0 out of 5 stars Balance of cost and performance
Reviewed in the United Kingdom on October 17, 2015
Verified Purchase
I purchased this as an upgrade component for the computer I use for photography, graphics and amateur animation. It arrived quickly, installation was smooth, and it's been running without a hitch for several weeks now. Before purchasing I had already I checked compatibility with all new components I needed to install and with the older ones I wanted to keep, and all of that information has proven correct.This MB has proven itself to be a good compromise between performance and cost.
Read more
Report abuse
See all reviews