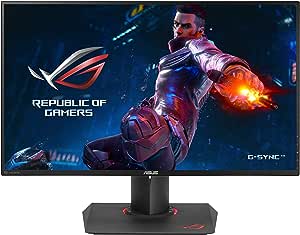 Visit the ASUS Store
4.4 out of 5 stars 536 ratings
| 114 answered questions
Currently unavailable.
We don't know when or if this item will be back in stock.

Republic of Gamers (ROG) is an ASUS sub-brand dedicated to creating one of the world’s best gaming hardware and software. Formed in 2006, ROG offers a complete line of innovative products known for performance and quality.

Surrounded by 144Hz pretenders to the throne, only the ROG Swift PG279QZ is utterly victorious with a 165Hz refresh rate on IPS and NVIDIA G-SYNC technology. Equipped with ASUS exclusive Eye Care and ergonomics to minimize eye strain, the PG279QZ also delivers stunning colors for vivid and immersive gameplay.

Become a member of the ROG Elite Rewards loyalty program and earn points for being an active Republic of Gamers fan. There are many ways to earn points including purchasing ROG gear, and a selection of rewards that can be redeemed with points, tailored to the ROG community. Rank up with ROG Elite Rewards!

Surrounded by 144Hz pretenders to the throne, only the ROG Swift PG279QZ is utterly victorious with a 165Hz refresh rate on IPS and NVIDIA G SYNC technology. Equipped with Asus exclusive eye Care and ergonomics to minimize eye strain, The PG279QZ also delivers stunning colors for vivid and immersive gameplay. The brightness is 350 cd/㎡

4.4 out of 5 stars
4.4 out of 5
536 global ratings
How are ratings calculated?
To calculate the overall star rating and percentage breakdown by star, we don’t use a simple average. Instead, our system considers things like how recent a review is and if the reviewer bought the item on Amazon. It also analyzes reviews to verify trustworthiness.

redone13
1.0 out of 5 stars Not Really Improved from the PG279Q . . . Another Panel Lottery
Reviewed in the United States on December 15, 2018
Size: 27-InchStyle: WQHD IPS 165Hz, Adjustable standVerified Purchase
I purchased this after having gone through 4 PG279Q models, and it’s already on its way back. One may wonder why still even bother with Asus at this point? Well, it's pretty much for the same reason everyone else does: the allure of a monitor with a refresh rate of 165 Hz, a resolution of 2560x1440, an IPS-type panel (AU Optronics calls it AHVA or Advanced Hyper-Viewing Angle), and G-Sync (which has since become less of a selling point due to Nvidia's decision to support FreeSync). The monitor I received had backlight bleed similar to the fourth and last PG279Q I purchased. It's usually the worse in the top right corner, followed by the bottom right corner, with a very minimal amount in the bottom left corner and the least amount in the top left corner.

It all has to do with where the bezels place pressure on the screen. One can press on certain points of the bezel and watch the bleed fade resulting in a more even spread of that cool blue/white sheen, known as IPS glow, that we've all come to know and love on IPS-type displays. Upon releasing pressure, the bleed creeps back in making the root of the problem quite evident. For the uninitiated, IPS glow is a compromise one accepts when using an IPS-type display while backlight bleed is a defect resultant from loose manufacturer tolerances related to quality control back at the factory. To make matters worse, the color temperature in the upper left quadrant of the screen was much warmer in comparison to the rest of the screen. There was an orange tint present that irked me to no end when I was in file explorer, word processors, or anything that had a white background. My sample failed to accurately portray light content in addition to dark content.

I have a Dell U2410 that I keep having to take back out because so far, at least for me, nothing has been able to beat it as far as overall quality goes. Quite often I see the argument made that one wouldn't stare at a black screen during regular usage. Although I agree with this statement, I’d also like to point out that it’s nearly impossible to not encounter dark content whilst browsing web pages, watching videos, viewing pictures, or perhaps most relevantly, playing video games. I've tried to cut Asus some slack in that I understand that these panels support a technology that took AU Optronics some time to achieve; however, the problem now lies not only in the bezels but the panel itself. I do hope that LG gets their take on this market right with their LM270WQA panel. I would advise staying away from this monitor because the story is a familiar one.
Read more
114 people found this helpful
Helpful
Report abuse

Zane
5.0 out of 5 stars No dead pixels, minimalist boxing with Amazing Price
Reviewed in the United States on January 10, 2019
Size: 27-InchStyle: WQHD IPS 165Hz, Adjustable standVerified Purchase
To start, I did not own the previous model (PG279Q) but this current monitor has no dead pixels. There is lightbleed in the upper left corner, but is barely noticeable. I have to confess, I would have never thouight to "test" this unless I had read these reviews first. Dang, I know its $599 and expensive, but some of you all are even more picky than my near OCD self about perfect technology.
Owning my own tech firm, I wanted a nice new monitor since I just updated my current PC 8700K w/1080. I'm not a huge "gamer" but enjoy PUBG once in a while. All I have to say, coming from a 60HZ 1440p beautiful ACER monitor that works just fine, this is a flat out luxury monitor with the best IPS display I have seen. I have seen over 500 monitors owning a tech firm (most to be fair a lot cheaper) but damn this is beautiful. The refresh is buttery smooth. Oh, one point:
YOU MUST MANUALLY CHANGE THE REFRESH RATE. OUT OF THE BOX IT IS 60HZ.
Possibly I'm a "noob" or whatever it is called, but I did not know this and was frustrated for a good 5 minutes. The 165HZ refresh is something I truly enjoy and will never go back on 60HZ.

As for the backlight bleed, I can ONLY see it when the monitor is pure black in a pitch dark room, and then it is barely seen. I'll take this extremely trivial payoff for an IPS vs blurry TN coloring. Some TN panels are near IPS quality, but at the time none can match the best like this monitor. Cannot recommend this enough. Shocked it was only $599 instead of the normal $799. This panel is gorgeous, I use the portrait mode a lot also for work productivity.

Lastly, I hated the base design and "republic of gamers" logo since I am not a huge "gamer" but you can turn off the lights and logo. I think it personally looks a lot better with the lights off, but to each their own.

Josh
5.0 out of 5 stars This is the one!
Reviewed in the United States on December 11, 2018
Size: 27-InchStyle: WQHD IPS 165Hz, Adjustable standVerified Purchase
This is the newer model to the old model (pg279q) which you had to play the lottery to find a good one. The pg279qz Panel is perfect. No dead pixels. No ips glow. Amazing colors and they were spot on. Gsync is awesome. The specs are the same as the older model but the panel is much nicer quality.
Read more
54 people found this helpful
Helpful
Report abuse
See all reviews

Sang
4.0 out of 5 stars Overall, good product.
Reviewed in Canada on November 4, 2019
Size: 27-InchStyle: WQHD IPS 165Hz, Adjustable standVerified Purchase
What I like:
This monitor is, without a doubt, THE best 27" 1440p 144hz 1ms IPS monitor with G-Sync right now.
The picture quality is gorgeous.
The bezels are thin.
The built-in speaker is a plus.
Native G-Sync ready.
Logo on the foot of the stand and the ring at the neck of the base can light up red when turned on in settings.
Fully adjustable stand.
Has built-in crosshair feature for FPS games (although, some may consider it "cheating")

What I dislike:
I had a very big headache with Amazon and the courier trying to order a proper replacement.
I had to order 3 replacements (4 total monitors).
Only 1 out of the 4 monitors had minimal, bearable backlight bleeding.
Price is hefty, but expected, given the quality of the monitor.
Read more
2 people found this helpful
Report abuse

Andrej Bekcic
2.0 out of 5 stars Ok, but panel lottery is against you
Reviewed in Canada on December 14, 2019
Size: 27-InchStyle: WQHD IPS 165Hz, Adjustable standVerified Purchase
Replaced it 3 times with amazon to find one that didn't have yellow tint (backlight bleed) around the edges.

After the third one, contacted Asus and escalated and then got one with just bit of yellow tint in the top right corner.

If Asus actually had QA this would be a great product but like this it's just too much hassle.
Read more
One person found this helpful
Report abuse