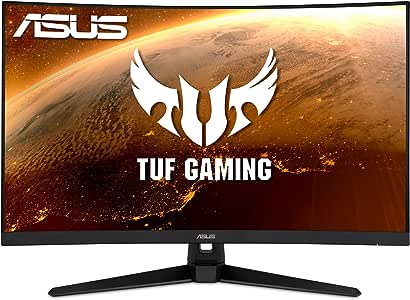 Visit the ASUS Store
4.6 out of 5 stars 4,018 ratings
| 289 answered questions
Amazon's Choice recommends highly rated and well-priced products.
Amazon's Choice for "asus curved monitor"
Available at a lower price from other sellers that may not offer free Prime shipping.

4.6 out of 5 stars
4.6 out of 5
4,018 global ratings
How are ratings calculated?
To calculate the overall star rating and percentage breakdown by star, we don’t use a simple average. Instead, our system considers things like how recent a review is and if the reviewer bought the item on Amazon. It also analyzes reviews to verify trustworthiness.

Jules
5.0 out of 5 stars Brief review (since there aren't any as of me writing this)
Reviewed in the United States on June 3, 2020
Style: 24.5" Fast IPS 1ms 280HzPattern Name: SingleVerified Purchase
- Good color accuracy out of the box.
- Didn't have to adjust much other than the obscenely high brightness that every monitor seems to come with nowadays.
- ELMB is surprisingly good even though it seems to lock the overdrive. If I had to guess it would be overdrive 60 since it's the default setting of the monitor. I had only heard bad things about ELMB from reviews on other models so I was glad to see it's at least a little bit useful here.
- No grainy text or anything of that sort. Menu is easy to navigate and the OSD joystick is of good quality.
- Really good stand which fortunately seems to be a staple of recent Asus monitors.
- The speakers are well, monitor speakers. If you've heard monitor speakers, you've mostly heard them all.

Also I'm not sure if this is a feature on every 240hz monitor since this is my first one but I found it interesting that Windows registers the panel as 10 bit color if you use it below 240hz. And for the people worried about 60hz performance, sorry. I don't have any equipment to measure exact numbers. All I can say is that when I played my PS4/Switch I didn't notice anything off.

All in all, I highly recommend the monitor if you're on the lookout for a 240hz panel. To be honest the price ($319) is almost too good to be true when you compare it to other gaming monitors in the price range. I tried a 1440p monitor and didn't think the performance hit was worth the minuscule fidelity gain. If you're looking for a monitor you'll strictly use for gaming/browsing, I really think you're better off sticking with the tried and true 24"/1080p combo so that you can utilize higher frame rates and not have to worry about messing with Windows scaling to have easily readable text. Maybe get a 1440p (or bigger) as a secondary? I dunno. Everyone has different needs so I'll just shut up and end this crappy review here.

Andrew
5.0 out of 5 stars Brilliant so far, panel is great as I expected with a IPS panel. No complaints!
Reviewed in the United States on September 10, 2019
Style: 27" QHD/2K IPS 165HzPattern Name: SingleVerified Purchase
Right out of the box, extremely happy with this monitor. It was featured in a Linus Tech Tips episode recently, and I managed to find it for much less than the price I saw just now (~$800). Actual MSRP is in the 450$ range, so don't get ripped off if you're looking at this monitor as an option. It is no 800$ monitor, but by no means is it a slouch either.

Assembly was silly easy. Attach base, plug in power, plug in HDMI or DP cable, and you're in business. Only gripe I have at this point is the IO ports on the back are a little close to the monitor backplate. I was originally going to use a Cable Matters DP cable that had locks on it, but the thicker plug on that one necessitated I use the cable that came with the monitor. It also was really difficult to get the cable to click into the monitor due to the same close tolerances. Finally got it in place, and the monitor fired right up.

Ran the Heaven benchmark in order to tweak the settings to where I wanted them, and also see how the monitor performs. Initially, there was a bit of flickering. Opened up Windows Display settings and maxed the Hz at QHD, and it seemed to dramatically reduce it, but there was still a teeny bit of zig zagging in shadow borders. I found the OC option in the Monitor's menu, and that immediately resolved the issue. I still followed up by maxing the Hz selection under both Windows Display options and Nvidia Control Panel, haven't looked back.

I was able to OC the monitor using Nvidia to 165(!)Hz, and have had zero flickering or stuttering. Color me impressed! I know the monitor is advertised to 155Hz, so being able to push it beyond that is a nice add on.

The ELMB function is pretty amazing too! image is buttery smooth, and I can read text on windows while moving them around. I wouldn't say it's crystal clear, but it's definitely nice!

IPS Panel looks amazing sitting next to my 4K IPS monitor as well, color between the two on default settings are very similiar, brightness is about the same as well.

I expect for the money, the backlights will hold up better than the other monitor I purchased. If anything changes or this monitor quits, I'll update this review, but I think ASUS hit the nail on the head with this one. Very happy with the monitor!
Read more
64 people found this helpful
Helpful
Comment Report abuse

Kevin A. Nash
2.0 out of 5 stars ELMB is currently awful and pointless
Reviewed in the United States on September 6, 2019
Style: 32" Curved QHD/2K 144Hz w/ Height AdjustablePattern Name: SingleVerified Purchase
I was excited to get this monitor because of the ELMB. Having all the benefits of ULMB without the drawbacks of losing variable refresh rate? Sounds wonderful!

Well, in practice, it's actually awful. ELMB causes noticeable artifacting around an object moving on the screen. TFT Central shows this same problem for the IPS monitor that has ELMB, if you want a reference. Trading motion blur for reduced brightness as well as the ELMB artifacting is simply not worth the trade-off, in my opinion.

The display settings are obnoxious. There's no "normal" display mode. All of the display modes are some sort of "GameVisual" mode, except for sRGB, which disables the setting of Brightness, Contrast, etc. This makes it difficult to calibrate the display optimally.

The icing on the cake, and the reason I am ultimately returning this monitor, is the dead pixel issue I encountered. This could easily be just an unlucky panel, but I personally do not wish to have a monitor with pixels noticeably not working.
Read more
50 people found this helpful
Helpful
Comment Report abuse
See all reviews

Tyler
5.0 out of 5 stars Excellent Monitor for Competitive Games
Reviewed in Canada on July 4, 2020
Style: 27" Fast IPS 1ms 280HzPattern Name: SingleVerified Purchase
I really like this monitor because ELMB Sync is just amazing. I turned this feature on and my skills increased 20-40% in Valorant. Only downside is that the monitor is a tinier darker with ELMB on.

From 144hz to 280hz was not a night and day difference but you could see that everything was more buttery smooth.

However this is where you begin seeing diminishing returns.

Say for instance I'm lost in thought walking down the street and there's just some dude with a monitor standing at the corner. They offer me a reward if I could correctly tell if it's 240 or 280hz. There would be a 50/50 chance that I'd answer correctly.

-280hz. That's why you're buying this, right?
-IPS. This too, probably.
-G-Sync VRR. No more tearing.
-No thick power cord to route along a desk
-Relatively affordable for what it is
-Joystick on the monitor for easy OSD navigation. Every monitor should have one of these.

Neutral:
-Contrast.
-Can only adjust overdrive in increments of 20 to a max of 100
-No in-menu gamma adjustment
-HDR reproduction is meh. Treat this as a normal monitor with perks.

Cons:
-Can't adjust overdrive when ELMB backlight strobing is enabled.
-Noticeable crosstalk when ELMB is enabled at framerates below 280. Very visible artifacts and ghosting.
-Backlight uniformity on my unit isn't perfect. Not enough to bother me in-game but enough to notice on white web pages (like now as I'm typing this review).

A noticeable upgrade from 144? Sure why not.
Read more
5 people found this helpful
Report abuse