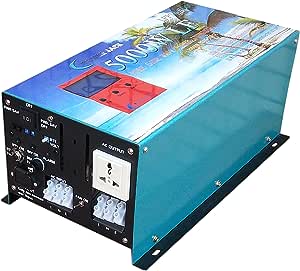 by PowerJack
3.5 out of 5 stars 9 ratings
| 5 answered questions
Currently unavailable.
We don't know when or if this item will be back in stock.

*Specification :
DC Input Voltage: 24V
AC Output Voltage: 110V±5%
Regulation: ±5%
Frequency: 60HZ±3%
Efficiency: 90%
Output Wave Form: Pure Sine Wave
Temperature Protection: 70C
Input Low Voltage Alarm: 21V
Input Low Voltage shutdown: 20V
Input High Voltage Alarm: 28V
Input High Voltage shutdown: >29V
No load current draw when power save on: 0.36-0.46A
No load current draw when power save off: 1.8-2.3A
Certificate: CE
*Warranty: 1 year (Winthin one month since the customer receive this, if the inverter has problem, just contact me on the details, we can send the parts with free charge only one time. If over one month to one year, the shipping cost for the parts will be paid by the customer, but the parts is free.)
*Note: As this unit could have parts loosing caused during transportation, so please DO check item carefully before testing. If the inverter is damaged by the courier seriously please report this to the courier right away.
*If you only connect battery with load, ac cable unconnected, when you switch to battery charger mode, this means power save mode on, in this moment the condition as follows: The inverter will go to sleeping mode, no load current is 0 AMP, every 3 sec., the inverter will detection itself, after the 3 sec., amp will go to 3 amp (stand by power, time: 1 sec., then back to sleep mode, amp is 0), the inverter will repeat the situation, until you switch to power save off (inverter on, down side)
*If customer needs to use refrigerator, can switch the mode to power save on, as refrigerator only will work every half an hour or one hour , but inverter stay in power save function, no load current is 0 amp, will save power.
*Warning: Inverter must be switched OFF before connecting/disconnecting batteries or AC input/outputs. Failure to do so may result in inverter damage.

3.5 out of 5 stars
3.5 out of 5
9 customer ratings
How does Amazon calculate star ratings?
Amazon calculates a product’s star ratings based on a machine learned model instead of a raw data average. The model takes into account factors including the age of a rating, whether the ratings are from verified purchasers, and factors that establish reviewer trustworthiness.

Tonster
2.0 out of 5 stars Do not buy.
Reviewed in the United States on May 18, 2019
Verified Purchase
Inverter works ok. The transfer switch and battery charging functions do not work. Tried to contact tech support several times and I have not received any response. Very disappointed.
Read more
Helpful
Comment Report abuse

Nickbessenroth
1.0 out of 5 stars Didn’t work
Reviewed in the United States on May 16, 2019
Verified Purchase
Really upsetting it turned on but alarm would not stop and it didn’t work ... went to harbor freight and had to buy the other one .. now I have a very expensive and heavy paperweight
Read more
Helpful
Comment Report abuse

AS PER CHIEF
4.0 out of 5 stars Great buy, would recommend
Reviewed in the United States on December 5, 2018
Verified Purchase
Works good, I run 24v 600 amp battery bank up to 60% of the battery, 24/7. (2) 4k 55" tv's, router, cable box, computer, ps4, xbox x, lights, fan everything. Only thing to consider is that the fan has to be turned on and off manually. I have another solar system to run the external fan nonstop. Inverter does not get hot even at daytime. Very big and heavy. No noise, even with fan is very quiet, my reliable 2000w is super loud compared. 1 month old
Read more
6 people found this helpful
Helpful
Comment Report abuse

BH57
2.0 out of 5 stars Electrically fragile, low output
Reviewed in the United States on April 2, 2019
I bought one of these inverters in September 2018 and have been "getting to know it" since then. It first, the inverter seems like a good deal. It is an inverter/charger so, it will charge your battery bank at a high current when house power (120 Vac, 60 Hz) is available. It will also act like as an UPS (Uninterruptable Power Supply), meaning, it will automatically switch the output from inverter power to house power when it is available. It has real-time diagnostics and will talk, telling you where a problems lies if one is detected. It has a 60 Hz toroid power transformer (which is more efficient and it does not leak magnetic field). It outputs a low distortion sinewave. Idle current with my unit was 0.75 amps with 24 Vdc input (which is quite reasonable for a 5 kW inverter). Efficiency runs 80 to 88% depending upon the load. The cooling fan is relatively quiet and comes on when internal temperatures, with either the power transformer or heatsink rise above a predetermined level. The inverter works nicely when it works.

Problems I have noticed. (1) The inverter output power is rated at 5,000 watts continuous, with 20,000 watt peak surge. In looking over the components (size and power handling capacity) used in the inverter, I estimate the continuous output power to be about 2,000 watts, and peak surge at 8,000 watts.

(2) The inverter does not appear to have any, or has insufficient protection circuitry. I found this out the hard way. I was using the inverter to charge my battery bank. The batteries were nearing full charge and charge power being pulled from the AC outlet by the inverter was around 500 watts. At this time, I plugged a small window air conditioner into the same outlet that was feeding the inverter. The air conditioning unit draws 400 watts after it has been on for a few minutes. When the air conditioner compressor kicked in, the power surge it generated tripped the house circuit breaker (15 amps). Fortunately, I saw the power go off so, immediately checked into the problem. Smoke was rolling out of the inverter and the diagnostics were voicing a problem, so I immediately disconnected the inverter from the battery bank. The circuitry breaker tripped due to the inverter shorting out.
In troubleshooting the inverter afterwards, I discovered, the power surge had damaged all 4 Mosfet boards and the Driver board. (The most damaged Mosfet board is pictured). Fortunately, Power Jack (the manufacturer) sells replacement boards on their website for a reasonable price. The Mosfet boards are $25 each and the Driver board is $20 each. They are not that difficult to change out if you have some electronic servicing experience.

Failure analysis: It appears that when the power surge occurred, the power transformer in the inverter discharged (due to collapsing magnetic fields), which generated high voltage with high current. The transistors on the Mosfet boards appear to have had their maximum rated voltage exceeded, which smoked the parts. The excess voltage and current also went backwards through the Mosfet boards to the Driver board, which received the same type damage.

This seems to be a common occurrence given the number of YouTube videos I have seen on Power Jack inverter failures. Instead of just ordering replacement boards, I replaced the failed parts with improved parts with higher voltage and current ratings, which should help some. The problem remains however, damage like this should not take place if the inverter is designed properly.

For protection measures, if you are in a long term power outage situation and need to charge your battery bank using the inverter, I would recommend using a dedicated inverter generator (with nothing else connected to the generator output) to power the inverter. I would also connect a radiator style electric heater in series with the inverter to limit how much power the inverter can pull out of the generator. I have experienced a 15 amp draw using a standard power cord. The inverter has a 0.7 power factor while charging, which the generator may not like at high currents. So, to prevent a sudden generator output shutdown (which would blow the same 5 boards I experienced), the series resistor load is needed. Just set the heater setting (high, medium, or low and thermostat at maximum) before you connect power (don't change anything while the power is on or, you risk blowing the inverter out).

If you are going to try to depend upon this inverter long term, I suggest having a stock of boards on hand and know how to change them. Having a backup inverter on hand would also be useful.