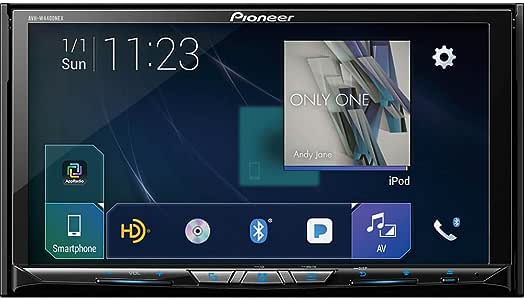 Add to Cart
$519.00
& FREE Shipping on eligible orders. Details
Sold by: Sound-Waves
Have one to sell?
Sell on Amazon

The AVH-W4400NEX features built-in Wi-Fi wireless Connectivity specifically designed to support a cable free connection between your smartphone and the receiver. Supporting both Android Auto wireless and Apple Car Play via a wireless connection Plus Wi-Fi certified Miracast wireless mirroring for older devices, You No longer need to worry about taking your smartphone out of your bag or your pocket before you get into your car.

4.3 out of 5 stars
4.3 out of 5
180 customer ratings
How does Amazon calculate star ratings?
Amazon calculates a product’s star ratings based on a machine learned model instead of a raw data average. The model takes into account factors including the age of a rating, whether the ratings are from verified purchasers, and factors that establish reviewer trustworthiness.

Devin W.
1.0 out of 5 stars Learn Mandarin or figure out how to get Android Auto to work. No time for both.
Reviewed in the United States on November 29, 2018
Verified Purchase
Huge pain in the butt if you don't have an iPhone. I specifically bought this model for miracast capabilities AND Android Auto wireless connectivity. Apparently only a couple android models work wirelessly for AA (pixel and nexus phones apparently. Thanks, google). My galaxy s7 will NOT connect AA, only bluetooth hands free calling.

If you want wired android auto to work, you MUST BUY SEPARATELY the CDMU200 interface cable and plug it into the back of the head unit in USB 2 port, as port 1 ONLY WORKS WITH APPLE. You're not going to find any of this out unless you've done a lot of research online. Pioneer really disappointed me here. I'm not about to buy a new phone just to work around the false advertising, and if I have to buy another USB cord and that doesn't work, I'm sending the whole thing back. I've never had any piece of tech give me this big of a headache in the last 15 years, and this easily takes the cake. I've had to pull the head unit out literally a half dozen times already and STILL haven't gotten this POS to work.

D
3.0 out of 5 stars Good head unit, but missing a huge feature
Reviewed in the United States on October 5, 2018
Verified Purchase
Really? No parking assist feature??? I've had 2 previous models of this head unit in the same vehicle and both of them included parking assist feature that included lines that appear when backing up with my existing back up camera; not sure why this newest model is missing it; hoping for a firmware update available soon that includes it. Otherwise, this is a fantastic head unit to use with Android Auto and the sound quality is great, much better than other models I've owned.
Read more
62 people found this helpful
Helpful
Comment Report abuse

Stephen
3.0 out of 5 stars Update: After a few months, pretty hard to recommend
Reviewed in the United States on December 22, 2018
Verified Purchase
Update March 2019:
After having the radio in the truck for a few months now, I'm reconsidering my original 5-star review based on two very irritating issues:

-The first, and most glaring issue, is literally that: Glare. It's terrible. On a sunny day, the screen gets completely washed out, and the only way to see the screen is to put your hand over it to block the glare, which is dangerous when driving. I tried an anti-glare protector by BoxWave, but it rendered the touchscreen unresponsive. Awesome.

-The other issue is that the radio will just randomly shut off entirely and go black when driving (firmware 1.01). And it is very random, with no apparent correlation to carplay vs radio vs no music, or when moving or stopped. This makes the issue very difficult to diagnose, and the only way to fix it is to turn the truck off and start it again. So yeah... that's not great.

I've sent a message to pioneer on the issues, but have yet to get a response. Overall, these latent 'features' has soured what was initially a great installation. I'm starting to wonder if any aftermarket radio is worth it for cars less than 10 years old; maybe getting an OEM upgrade is best, and although expensive, has a much better rate of actually working.

Original 5-star Review:
I purchased a JVC KW-M845BW on what I thought was a song on black friday, but had nothing but problems with it. The audio quality was poor, no HD radio support, no HDMI, no Miricast, no DVD or SD card, no wireless android or wireless carplay functionality, no included AVI 3.5mm input cable (which was proprietary), the list goes on. It was neigh unusable, and after several phone calls for support, firmware updates, and curse words, I did a bit more research, returned that piece of junk and ordered the Pioneer AVH-W4400NEX. What a difference!

I installed it with the F-150 idatalink panel kit and a maestro RR for the steering wheel compatibility as a Christmas gift for the lady (her truck) and it is totally flawless. The HD radio is brilliant, and the amp they use in this made the JVC receiver sound like a tin can. It also supports external amps if you have them. HDMI input is very useful for our wireless camera that we use in our horse trailer to check on them while towing (a $13 parking brake spoof thing worked on this) and the miricast is surprising useful as well. The screen also folds down to reveal a DVD drive and SD card slot to put music and files on, and you can even remove the screen completely if you want to discourage thievery.

This version, unlike the AVIC-64/8400 series, does not have a built-in GPS, so you must use Carplay/Android Auto. Which is probably the best navigation method anyway. Carplay set up practically by itself, and android auto looks great (it even synced to the time of day on it's own; nice touch).

It is important to note that only some android phones support wireless android auto; this is a limitation by Google, NOT Pioneer. As android phones get new versions, this may change, but sadly my Xperia only works in wired, which is no big deal to me, but ymmv.

I noticed a few negative reviews on this receiver due to a missing feature here and there (although my parking assist works great, and compared to HD Radio/youtube music/spotify, satellite radio is garbage) but for the price, I can say you won't find anything better!

G-coder
4.0 out of 5 stars Easiest Carplay Interface
Reviewed in the United States on January 7, 2019
Verified Purchase
I wanted to upgrade my wife's VW head for something with carplay. I was shocked to find how few WIRELESS carplay heads are out there. I was a little worried that the technology may not be up to snuff. Not so! After the install, I found the stereo via bluetooth, then it automatically sets up the WiFi connection with my phone. Literally as easy to pair as any bluetooth out there. From there it was seamless. I access my maps (google and apple), my streaming music, my phone, texts, and Siri.

I dropped off a star only due to the difficulty of install. I shouldn't say difficult, more just... complex. You have to use some sort of programmable module to interface all the features of this head with all the features of modern cars. Gone are the days of grabbing your soldering iron and a wiring diagram to install any deck. Now you need all that, plus a module, plus a PC, plus adapters, etc. I am a mechanical engineer and work a lot in automation. It took me about 3 hours and about $300 of extra equipment to get everything working right, but at the end of the day I got my factory camera, bluetooth, and steering wheel buttons all set up. Just be cautious that if your skills are lacking at all, you may need a pro.

I am not a big sound upgrader, so I can't comment on use with amps or aftermarket speakers. I will say this makes the infotainment system on our 2015 Passat better than anything you can get from the factory in any make of car.

My favorite feature is that it automatically connects to multiple phones, then you can easily toggle the one you want. It allows both my wife and me to be in my wife's car and and quickly pull up my phone on the stereo instead of hers.

All said, you will not be disappointed by this unit. It is not a bargain stereo, but it is worth the money. Even the additional install hardware doesn't make it overpriced.
Read more
23 people found this helpful
Helpful
Comment Report abuse
See all reviews from the United States

Samuel Covino
5.0 out of 5 stars Works perfectly
Reviewed in Canada on March 31, 2019
Verified Purchase
Product comes with everything you need to get it running, just pick up your vehicle adaptor and faceplate and your good to go
Read more
Helpful
Sending feedback...
Thank you for your feedback.
Sorry, we failed to record your vote. Please try again
Report abuse

Page 1 of 1 Start overPage 1 of 1
This shopping feature will continue to load items when the Enter key is pressed. In order to navigate out of this carousel please use your heading shortcut key to navigate to the next or previous heading.
Back
Next
Pages with related products. See and discover other items: hd radio, dvd to usb, car audio, Apple Security Cameras, Audiophile Sound Systems, Car Panels