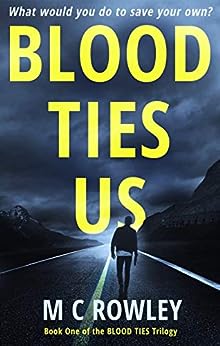 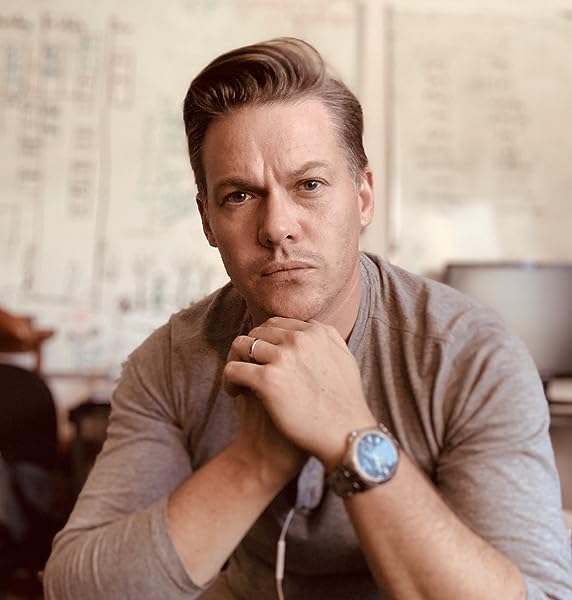 by M C Rowley (Author) Format: Kindle Edition
Book 1 of 3: The Blood Ties Trilogy
See all formats and editions
Sorry, there was a problem loading this page. Try again.
What if the son you thought dead for 22 years was secretly alive?
What if you found out your wife had known and kept it from you?

In a hospital in Guatemala City, a newborn baby is abducted, leaving his parents, SCOTT and ELEANOR DYCE, devastated. Twenty-two years later, Scott has given up on finding his son. Eleanor has not.
Grief divides the couple – and secrets. Unbeknownst to his wife, Scott has become an industrial spy, working in Mexico for a man he knows only as MR. REYNOLDS. And following a tipoff from Reynolds’ guy, JASON, Scott discovers emails between Eleanor and a drug cartel. Their son is alive, and Eleanor has been negotiating secretly to meet him.
But before Scott can confront his wife, she disappears.
If you love fast-paced, psychological thrillers, you will love Blood Ties Us, the first book in the Blood Ties Trilogy.
Read more
Previous page
Next page

Next 3 for you in this series See full series
Total Price: $8.97
Books In This Series (3 Books)
Complete Series
The Blood Ties Trilogy
Kindle Edition
Page 1 of 1Start OverPage 1 of 1
Previous page
Next page

A crime and suspense thriller writer, M C Rowley takes inspiration from his adopted home of Mexico to write fast-paced and action based stories.

His "The Blood Ties Trilogy" is a saga based on an abduction that took place in 1992 in Guatemala. There is a prequel novella available called Case Files, and the first book, Blood Ties US came out in February 2017. Book 2, Blood Runs in 2018 and book 3, Blood for Blood, will be released in July, 2019.

An avid reader, Michael found it hard to get through books when his two children were born, until he discovered thriller e-books. He discovered the worlds of Jack Reacher, Harlan Coben and Joseph Finder and was hooked. He now believes thrillers are the ultimate in story-telling.

He lives in Central Mexico where he spends his time running his own business and enjoying the local brews when time permits. He was born in London and visits England whenever he gets the chance.

JimF
4.0 out of 5 stars Interesting story
Reviewed in the United States 🇺🇸 on June 11, 2021
Verified Purchase
This was an Interesting story with plenty of plot twists. It took a while until things started to fall into place.
Read more
Helpful
Report abuse

MasterI-Gray
4.0 out of 5 stars MY SON...BE BACK?
Reviewed in the United States 🇺🇸 on August 3, 2017
Verified Purchase
This author serves the readers in his 1st book a little of everything...corporate espionage, corruption, blackmailing, abduction, etc...

I had some isdues with the translation and the many thing juggling at once, but not a total dissapointment.

The main character had so many issues at once..could he seen his...son again? How to twirl everything and don't die in the process? Who's who?

There're so many roads in the book to read and search, also a thriller with many bends and twists. A good work from M.C. Rowly on his 1st book.
Read more
5 people found this helpful
Helpful
Report abuse

awesomexraylady
2.0 out of 5 stars slow read
Reviewed in the United States 🇺🇸 on January 29, 2022
Verified Purchase
This was a slow read and I was really disappointed with the ending. I doubt I will read the next two books in the series.
Read more
Helpful
Report abuse

Kindle Customer
4.0 out of 5 stars Blood Ties
Reviewed in the United States 🇺🇸 on August 28, 2019
Verified Purchase
Interesting and entertaining story about a kidnapped baby in Guatemala and the parents who are still uncertain whether he is dead or alive over twenty years later. In their search for confirmation they become involved in a bizarre political mess.
Read more
One person found this helpful
Helpful
Report abuse

BP34
5.0 out of 5 stars Fast paced psychological thriller
Reviewed in the United States 🇺🇸 on August 2, 2017
Verified Purchase
An Abduction is the first book in The Son Of No One Trilogy . This is a fast paced psychological thriller that will have you page turning. Quite a tale that will have you on an emotional roller coaster. Full of blackmail, corruption, corporate espionage, political intrigue, kidnappings, spying and criminal cartels. Lots of suspense as Scott tries to rescue his abducted son and protect his wife. A great read.
Read more
4 people found this helpful
Helpful
Report abuse

Squeegee
4.0 out of 5 stars Kept my interest.
Reviewed in the United States 🇺🇸 on October 22, 2018
Verified Purchase
This book was well written. There was a little punctuation or spelling errors,to me. I think he comes from a different country than I do, so I looked over it. I never ‘had it figured out’ ahead of time. I’m looking forward to the next episode.
Read more
5 people found this helpful
Helpful
Report abuse

Douglas Winslow Cooper
3.0 out of 5 stars Lots of Complicated Pieces
Reviewed in the United States 🇺🇸 on August 28, 2018
Verified Purchase
This oddly titled book confused me at times.
There's lots going on, and one is rooting for the hero,
but plot complexities got me bogged down, and the
clever premise became implausible for me.

For the Kindle text-to-speech, which I used mostly,
it was irritating that somehow contractions and
possessives often had the 't and 's spaced away
from the primary word, so "the man's" was read as
"the man s." Oh, well.

Toni Standridge
4.0 out of 5 stars Pretty good book
Reviewed in the United States 🇺🇸 on August 18, 2019
Verified Purchase
I would recommend the book. I will be ordering books two and three. It had some twists that did surprise me.
Read more
Helpful
Report abuse
See all reviews

Rosemary56
5.0 out of 5 stars An Abduction - a review by Rosemary Kenny
Reviewed in the United Kingdom 🇬🇧 on February 26, 2018
Verified Purchase
22 years earlier Eleanor and Scott Dyce's baby son was stolen with all the others from a nursery ward in Hospital Roosevelt in Guatemala where they lived at the time.
Despite all attempts at discovering their baby's whereabouts no sign of him has ever been found.
Now under an alias, Scott is forced to work as an industrial spy by someone who says they know what happened to his son - the young man as he now is - and will reunite them if Scott does his dirty work satisfactorily!

Who is Lena Betancourt and how is she involved in Scott's subterfuge?
Where does Mr Reynolds tell Scott to go next - and why?
What is Governor Augusta's connection to Matias Esteban? How does Scott meet them and do they help him? When Eleanor is kidnapped who holds her hostage?

This far reaching thriller moves from country to country with so many plots and counter plots it's hard for Scott to know who he can trust - but one thing's for sure, you'll agree that M C Rowley has a magic formula for success, when it comes to spy-thrillers that keep the reader guessing right to the end!
Read more
One person found this helpful
Report abuse

MR JACK ROWLEY
5.0 out of 5 stars A Refreshingly Realistic Thriller
Reviewed in the United Kingdom 🇬🇧 on February 21, 2017
Verified Purchase
A very refreshing thriller in an often predictable and repetitive genre. The story flows superbly and the characters are both intensely strong and completely believable. The scenarios created here are dark and gripping, all set in the backdrop of wild Mexico which the author manages to describe with incredible ease. A very powerful read and cannot wait for part 2.
Read more
Report abuse

Amazon Customer
5.0 out of 5 stars Great Thriller!
Reviewed in the United Kingdom 🇬🇧 on February 11, 2017
Verified Purchase
Great read and narrative! Right from the very first page the story line was intriguing and full of twists and turns.
I literally read this in one night! If you like plenty of action with interesting characters and a fast moving plot then definitely read it!
Looking forward to reading the next book...
Read more
Report abuse

Helen
5.0 out of 5 stars I really enjoyed reading this book
Reviewed in the United Kingdom 🇬🇧 on February 14, 2017
Verified Purchase
I really enjoyed reading this book, characters were really easy to engage with and the plot has a fantastic pace. Super slick, super cool, can't wait for the next one...
If you like Lee Childs or David baldacci I'm pretty sure you will love this.
Read more
Report abuse
See all reviews
Report an issue
Does this item contain inappropriate content?
Report
Do you believe that this item violates a copyright?
Report
Does this item contain quality or formatting issues?
Report