You've subscribed to Chronicles of the Nephilim! We will preorder your items within 24 hours of when they become available. When new books are released, we'll charge your default payment method for the lowest price available during the pre-order period.
Update your device or payment method, cancel individual pre-orders or your subscription at
Your Memberships & Subscriptions
There was an error. We were unable to process your subscription due to an error. Please refresh and try again. 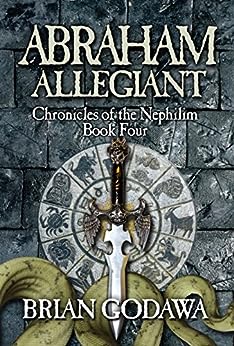 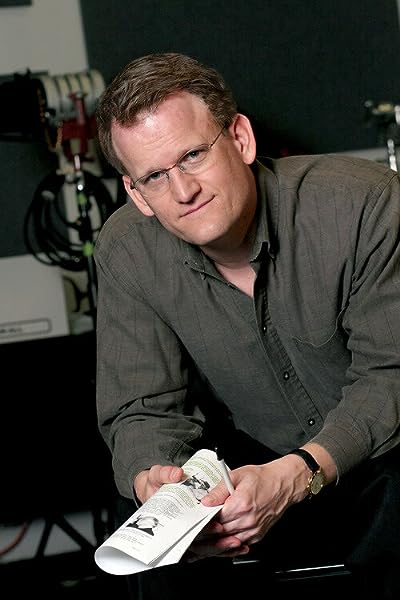 by Brian Godawa (Author) Format: Kindle Edition
Book 4 of 8: Chronicles of the Nephilim
See all formats and editions
Sorry, there was a problem loading this page. Try again.
Read more Read less
Previous page
Next page
Books In This Series (8 Books)
Complete Series 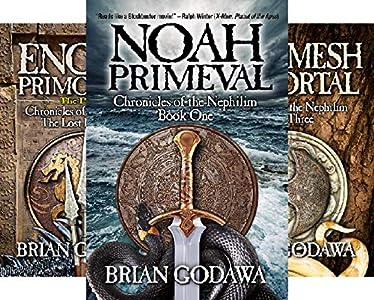 Brian Godawa is the screenwriter for the award-winning feature film, To End All Wars, starring Kiefer Sutherland, and Alleged, starring Brian Dennehy as Clarence Darrow and Fred Thompson as William Jennings Bryan. Previously Brian adapted to film the best-selling supernatural thriller novel The Visitation by author Frank Peretti for Ralph Winter (X-Men, Planet of the Apes), and wrote and directed several documentaries, including Wall of Separation for PBS. Brian's articles on movies and philosophy have been published around the world. He has traveled around the United States teaching on movies, worldviews, and culture to colleges, churches, and community groups. His popular book, Hollywood Worldviews: Watching Films with Wisdom and Discernment (InterVarsity Press) is used as a textbook in schools around the country. His novel series, the saga Chronicles of the Nephilim is in the Top Ten of Biblical Fiction on Amazon and is an imaginative retelling of the primeval history of Genesis, the secret plan of the fallen Watchers, and the War of the Seed of the Serpent with the Seed of Eve. The sequel series, Chronicles of the Apocalypse tells the story of the Apostle John's book of Revelation, and Chronicles of the Watchers recounts true history through the Watcher paradigm. His main website is www.godawa.com. --This text refers to the paperback edition.

4.6 out of 5 stars
4.6 out of 5
215 global ratings
How are ratings calculated?
To calculate the overall star rating and percentage breakdown by star, we don’t use a simple average. Instead, our system considers things like how recent a review is and if the reviewer bought the item on Amazon. It also analyzes reviews to verify trustworthiness.
Top reviews

Kindle Customer
5.0 out of 5 stars History, science and courtroom meet in thi fleshing out of bible characters of the "days of Noah, Enoch, Gilgamesh and Abraham."
Reviewed in the United States on January 29, 2018
Verified Purchase
I decided to read the first 4 books back2back before doing review. The explanations at back of books is phenomenal for understanding choices author made. Noah, Enoch, Gilgamesh and Abraham become well fleshed out humans with desires for adventure, true bravery and fear, loves, hates, sin and repentance. Sarah, Hagar and the other wives are loved and respected even as fellow warriors. Gods and goddesses are not just in the clouds. Science is returning full cycle. How Gilgamesh's story could realistically fit into the Biblical narrative is fully explained in a completely plausible fashion. The fallen ones aka "gods" and the Satan's courtroom shenanigans and motivations are logically laid out in a way that exposes the themes of YHWH's heart for good and patience VS the enemies short and long term plans, their deceptive "seeming submission" to control they fully intend to throw off at every opportunity. Very realistic. Well thought out and creative. One thing I don't understand is the propensity of characters choices to follow YHWH's instructions in everything except their eating of unclean foods. Noah clearly knew the difference and would have passed that understanding down. Secondly, Brian's explanation of goddesses like Ashtarte's ickiness would make Abraham's calling Sarah a goddess unlikely. Still waiting to see what he's going to do with gibborim. I already have the next book downloaded and ready to go.
Read more
2 people found this helpful
Helpful
Report abuse

Avid Reader In Utah
5.0 out of 5 stars Higly recommended series!
Reviewed in the United States on July 10, 2015
Verified Purchase
This was well written. I have been racing through these books, and the first thing I read is the back of the book! There, Brian explains how the story fits into the Bible as we know it, but never thought about it. We tend to see Abraham as an old man, offering his son up to God, who spares him at the last minute. We tend not to think about his life before that moment, and how that life must have shaped him and his relationship with God. I have read these stories in the Bible and I often wondered at the radical changes in God and His behavior from one verse to the next. Some stories have Him showing great mercy and kindness, others displaying a fierceness that is a little frightening. And I would wonder, why? I've enjoyed these stories especially because, if nothing else, they have given me a new perspective on what life could have been like then and why these stories are not seemingly random and, how in the light of that era, God's behavior and words are appropriate and actually loving.

I am a Bible-reading Catholic and I have yet to find anything in his books that would make me question my faith. In fact, I find myself frequently sympathizing with the characters and their struggle to remain faithful to a God they know is there but can't fathom, a God who provides miracles and demands obedience.

I just love how the story is set within the historical frame as we know it (from archaeological evidence). I have been recommending this book to many of my friends. Thoroughly enjoyable read!
Read more
5 people found this helpful
Helpful
Report abuse

KKilburg
5.0 out of 5 stars Excellent ancient bible stories brought to life through Godawa’s entertaining writing style
Reviewed in the United States on February 20, 2020
Verified Purchase
I have really enjoyed the Chronicles of the Nephilim series. Brian Godawa categorizes these as biblical fiction. The stories are based on actual bible stories, with many footnotes and references, so these stories are based on non- fiction facts with supporting references. Godawa uses fiction to fill the gaps and provide illustration, suspense and excitement. Bottom line I have learned so much about these ancient bible stories and have been thoroughly entertained by Godawa’s ability to bring these stories to life. Though I have read this whole series through Kindle, I have later purchased the paper backs to send to my family. I highly recommend reading the Chronicles of the Nephilim series.
Read more
Helpful
Report abuse

The author has an amazing imagination! God blessed him with story-telling talent.

Another great aspect of his nephilim series is how he can bring different research and historical findings and incorporate them into his story, sacrificing the fact of his storyline by giving you how he came about with 'certain' events in his narrative, regardless of whether fact or false, this he does by giving appendices at the end of the book. This ultimately, gives the reader a reason to do their own research.

All in all, the series is entertaining!
Read more
Helpful
Report abuse

Amazon Customer
3.0 out of 5 stars A well-written but ultimately flawed work
Reviewed in the United States on May 21, 2014
Verified Purchase
Like the other books in the Chronicles of the Nephilim, this one is well researched and very well written. I am grateful for Godawa's work on this series. However, I have two gripes that keep me from giving it a top rating. Unlike the previous books which came to a natural ending, this one ended so abruptly that it seemed it was time to send it to the publisher before he finished writing it. The story is well crafted leading up to the birth of Isaac. The writing drove the reader to the conclusion. But when we got there, it seemed like it was tacked on with literally a paragraph at the end. No explanation. Little rejoicing. Just "and the baby was born. The end."

Since neither the life of Isaac or Jacob have their own books, I expected the book on Abraham to at least cover up to the sacrifice of his son. Alas, it was not meant to be.

The second grievance is similar to those I have had with the first books but this one has strayed to a much greater degree. Godawa tries to make the marriage bed spiritual but largely fails. It is a shame too because this is something that needs to be done well. However, worse was the graphic portrayal of the sinful sex. Surely, this level of perversion must have happened leading up to the tower of Babel incident and the destruction of Sodom and Gomorrah as paganism ran free. But I think the story would have been better served if it had been handled with a little more discretion and a little less overt descriptive language.

These two issues mar what otherwise would have been a five-star rating.
Read more
6 people found this helpful
Helpful
Report abuse
See all reviews

Peter Stone
4.0 out of 5 stars Great read
Reviewed in the United Kingdom on February 21, 2020
Verified Purchase
Great novel and brought a lot of Biblical themes to life and a very imaginative way. It also made great use of extra Biblical writings without going against what the Bible actually says.
Read more
Report abuse

Kudakwashe Sithole
5.0 out of 5 stars Great storyline
Reviewed in Australia on May 27, 2014
Verified Purchase
It's amazing how the writer brings the biblical character to life. What you read in the bible only gives glimpses into who the person was and an overall picture of events. While I appreciate it's fictional, it allows the person reading to think 'that's how it could have happened'. What it does, is pique the interest of the reader - me - to pick up my bible more to read it. It also brings us to the point of who God is and who we are to him. We are not perfect and the heroes of faith mentioned in Hebrews 11 aren't either, but that does not stop God from using us. If the objective was to get us to read and study the bible more, then I would say that Brian Godawa has delivered in spades. I am absolutey enjoying the series.
Read more
Report abuse

Client d'Amazon
5.0 out of 5 stars Awesome book
Reviewed in France on March 14, 2021
Verified Purchase
Great story, love the imaginative drama around biblical stories. The new characters bring spice, the ones we’re familiar come to life and are so human, just like us
Read more
Report abuse