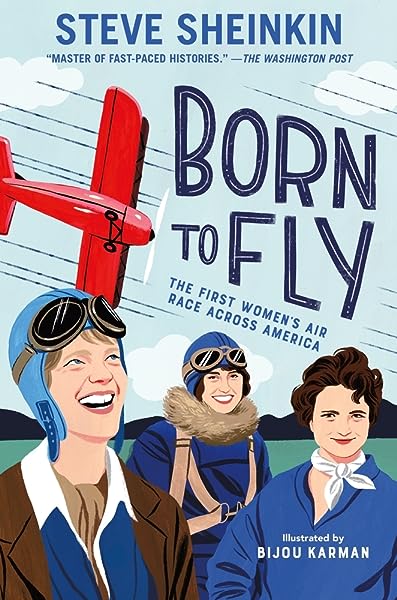 POPGr 3–5—Everyone in Abby's class hates history, especially her stepbrother, Doc. At the end of the school day, when Abby and Doc are waiting for their mom in the library storage room, they hear a thump coming from inside one of the cardboard boxes. Suddenly, out jumps Abraham Lincoln. He has traveled through time to let the students know that because of their complaints, he and other famous people have decided to quit history. This is where Abby's and Doc's exciting adventure begins. They must undo the damage they have done so that Abraham Lincoln will show up to the election and win the presidency. In this first book of the "Mixed-up History" series, Sheinkin combines historical facts with outlandish time travel antics. His historical note at the end encourages readers to "look it up" to find evidence of the unbelievable facts he shares about notable historical figures. Black-and-white line drawings reinforce the silliness of the story, while the short chapters will keep reluctant readers hooked. VERDICT A fun way to entice students to embrace what might seem, at first glance, like boring history.—Annette Herbert, F.E. Smith Elementary School, Cortland, NY

“By the end, readers will have learned quite a bit of history along with the protagonists, without being bored at all [in this] silly story.” ―Kirkus Reviews

“[A] lively Abraham Lincoln–themed romp . . . The truth about historical figures, Sheinkin suggests, is more interesting than the myths, and Lincoln’s story concludes with hints about the historical mix-ups that will figure into subsequent books.” ―Publishers Weekly

“Black-and-white line drawings reinforce the silliness of the story, while the short chapters will keep reluctant readers hooked. A fun way to entice students to embrace what might seem, at first glance, like boring history.” ―School Library Journal

“Imagine what the world would be like if Steve Sheinkin had decided to become a NASCAR driver instead of one of the finest history writers I know of. Or what if Neil Swaab chose to be a pastry chef instead of becoming one of the most clever cartoonists alive? Well, those guys might be happy, but it would be a very dull world indeed because we wouldn't have the terrific "Time Twisters" series for our reading pleasure. If you want to have fun while simultaneously learning some truly valuable lessons about history, then you absolutely MUST read these books.” ―Nick Bruel, New York Times–bestselling author of the Bad Kitty series

“A dash of history. A scoop of fun. Give this book to hungry readers everywhere!” ―Jennifer L. Holm, New York Times–bestselling author of The Fourteenth Goldfish, on Abigail Adams, Pirate of the Caribbean

“A model of research and documentation as well as of stylish writing that tells an always absorbing story.” ―Booklist, starred review

“A gifted storyteller who never forgets the story in history. . . . Superb nonfiction that will entertain as it informs.” ―Kirkus Reviews, starred review

Bomb:
“This is edge-of-the-seat material.” ―The Bulletin of the Center for Children’s Books, starred review

The Notorious Benedict Arnold:
“American history is brought to life in this engaging story of revolution and treason.” ―School Library Journal, starred review

I was as bored writing them as kids are reading them, and I started to wonder: are people like Abraham Lincoln and Abigail Adams sick of being in boring books? What if they could escape? Where would they go? What would they do?

That was the spark for this new series, Time Twisters.

In Abraham Lincoln, Pro Wrestler, Lincoln escapes the textbook in search of adventures. Abby and Doc, two kids who think they don't like history, try to set things right. But things do not go as planned.

In Abigail Adams, Pirate of the Caribbean,the first lady gets tired of doing laundry in the White House and joins a crew of Caribbean pirates. Upcoming adventures feature the cowboy Nat Love joining Neil Armstrong's trip to the moon, and Amelia Earhart competing in the ancient Olympics.

Each Time Twisters book ends with an "Un-twisting History" chapter, where I point out all the true stuff you actually just learned. This is my idea of a perfect storm, a history-comedy mash-up, a chance to introduce kids to people and stories I love, with hilarious comics by Neil Swaab. Thanks for taking a look!

Neil Swaab is a New York City–based illustrator, designer, and author. His work has graced the covers and interiors of numerous books for children including the New York Times bestseller Big Fat Liar by James Patterson and Neil's own series, The Secrets to Ruling School. He has also animated for TV and enjoys teaching at Parsons School of Design.

ThePhotoChimp
5.0 out of 5 stars Who doesn’t like a book about Lincoln?
Reviewed in the United States on April 15, 2020
Verified Purchase
My 9 year old loves this book. Great series altogether. It made him more interested in history. Well written. Length is perfect for 2-4 grade. Interesting topic.
Read more
Helpful
Report abuse

Jordan Bailey
5.0 out of 5 stars Great book
Reviewed in the United States on June 9, 2019
Verified Purchase
It was a good story for kids who want to make learning history fun!
Read more
Helpful
Report abuse

I. Teach
1.0 out of 5 stars Lackluster story and poorly written
Reviewed in the United States on April 7, 2018
Verified Purchase
I had high hopes of using this as a read aloud book in my second grade class, but the quality of the writing is poor.
Read more
Helpful
Report abuse

Julie Failla Earhart
5.0 out of 5 stars Kids will love this!
Reviewed in the United States on May 3, 2018
I’ve been obsessed with Abraham Lincoln and his family since I was a kid; I can’t get enough of him and his wife, Mary Todd.

In this delightfully imagined work, the fourth graders in Ms. Maybee’s class hate history. “It’s BORING!” Step-siblings Abby and Doc, especially Doc, are the loudest opponents of history. When Lincoln hear how much all the kids don’t like history, he decides to teach them a lesson.

Thanks to time travel Lincoln shows up in current time to teach them a lesson. He’s decided that he won’t go back to Springfield, Illinois, to win the 1860 presidential election, but instead, he wants to pursue a different dream: that of becoming a pro wrestler. Wrestling was much, much different in the 1860s than it is today, and thankfully, Sheinkin doesn’t delve into that. But that means that history is broken if Lincoln pursues his dream

It’s up to Abby and Doc to get him back to Springfield and fix history. As they learn about Lincoln and his life, they experience life in the 1860s and unwittingly learn about our greatest president ever.

At the end of the book, Sheinkin adds a chapter that tells what aspects of the story are true and what are not. I think that young readers will enjoy history in this manner, and without meaning to, learn something. Even I learned something! Abraham Lincoln: Pro Wrestler receives 5 out of 5 stars in Julie’s world.

Angela K. Simmonds
4.0 out of 5 stars History made fun!
Reviewed in the United States on April 14, 2018
Abraham Lincoln, Pro Wrestler is the first in a delightful new series by Steve Sheinkin. In this series, the students in Ms. Maybee's class think history is boring. And they're right. The history text books in their classroom don't have anything exciting to say about Abraham Lincoln's life, but Honest Abe wants to change all that. Traveling through time. Lincoln appears to Abby and Doc, siblings that are in Ms. Maybee's class. Taking them back to Illinois with him they get a peek at what life is like for Abraham Lincoln and they realize that if history is going to change it is up to them to convince the others in their class that history is exciting.
Funny, informational, and with great illustrations adorning the pages Abraham Lincoln, Pro Wrestler is a great introduction to history for children. Giving just a teaser of facts to entice them into wanting to learn more, Mr. Sheinkin then pulls those teaser facts into an informational chapter of what Abraham Lincoln's life was really like. As a kid I hated history. As an adult I have come to appreciate the facts my teachers tried to teach me. If I had a book like Abraham Lincoln, Pro Wrestler when I was younger instead of a dry history text book I might have acquired that appreciation earlier. 4 out of 5 stars

Reader27
5.0 out of 5 stars Thumbs Up
Reviewed in the United States on February 24, 2018
My seven year old son and I LOVED reading this book together. (He's even been putting on his pajamas and brushing his teeth without a fight so that he can get into bed and read it!) It's such a great mix of humor, history and adventure. It's full of hijinks and hilarity, but also some really interesting historical facts that I didn't know. We can't wait to read the next one in the series. With this book Steve Sheinkin proves, once again, that history is definitely not boring! And the illustrations are great too! Four thumbs up from this family.
Read more
6 people found this helpful
Helpful
Report abuse

Kelley Jefferson
5.0 out of 5 stars 9 yr old son loved this book!
Reviewed in the United States on March 3, 2018
It has been difficult to get my 9yr old son to read but he eagerly looked forward to reading this book and read it in 4 days. I caught him chuckling as he was reading! He wants me to order the next book. This book was a great find for my reluctant reader
Read more
3 people found this helpful
Helpful
Report abuse
See all reviews