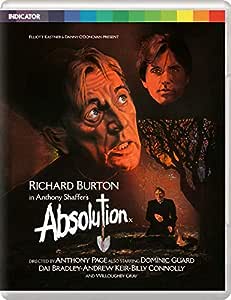 At a Catholic boys' school, domineering disciplinarian Father Goddard (Richard Burton, Look Back in Anger The Spy Who Came In from the Cold) rules over his pupils with an iron hand. When one of his teenage charges confesses to murder, the dogmatic but deeply repressed Goddard finds his faith challenged and his life spiralling dangerously out of control. Also starring Billy Connolly (in his first feature-film role), Dominic Guard (The Go-Between, The Picnic at Hanging Rock), Kes star Dai Bradley, and the inimitable Brian Glover (Kes, Jabberwocky, Alien 3), and written by the great Anthony Shaffer The Wicker Man i, Sleuth), Absolution is one of British cinema's most underrated chillers, not least for a towering central performance by Burton.

Jackie S.
5.0 out of 5 stars WATCH IT! Good movie.
Reviewed in the United States on July 27, 2018
Verified Purchase
I don't know what the bad review was about, I thought it was a great movie. The acting was very realistic. I usually read the reviews before I watch the movie, but with the mixed reviews, I decided I would watch it anyway....I'm glad I did. It was very interesting, held my interest and the ending was an eye opener, I didn't see that coming! Give it a try.
Read more
6 people found this helpful
Helpful
Comment Report abuse

J. Hovey
5.0 out of 5 stars Great Movie from the 70's
Reviewed in the United States on July 7, 2016
Verified Purchase
I hadn't heard of this movie until reading up on Anthony Shaffer. So I thought I'd give it a try. Solid storytelling with a constant sense that something "bad" was going to happen. But never sure just what. It kept me guessing up until the final scenes - much like The Wicker Man. Burton is in top form and the supporting cast of boys are great to watch. Having been raised a Catholic - I found the story to be quite interesting, alot like "I Confess" by Hitchcock. And the tension builds as the story plays out - and one never knows what is truth and what is not. I enjoy movies like these - that keep you guessing and wondering where it's headed. The ending is perfect!!!
Read more
9 people found this helpful
Helpful
Comment Report abuse

E. Phillips
4.0 out of 5 stars good movie, bad product
Reviewed in the United States on November 1, 2012
Verified Purchase
This was a good british film from the late 70,s which features Richard Burton in a starring role as a priest in a Catholic school for boys. a movie with a lot of twists and turns. but I couldnt enjoy watching it because of the terrible manufacturing quality of the DVD that it was made on.
I do not blame Movie Mars for this since I bought it brand new & factory sealed, and because I buy more stuff from Movie Mars than any other dealer on Amazon, and will continue to whenever possible. I believe the fault lies with the company who manufactures this particular DVD.
It played fine for about 30 minutes but then started to stop for 5 to 10 seconds and go black and then starts again in 2 to 5 minute intervals and then becomes more frequent the further into the movie it goes.most of the other movie DVD's I have purchased have played fine, but the manufacturing quality of this one totally sucked.
It is put out by Cheesy Flicks Entertainment instead of the original company that made the film.

warren
4.0 out of 5 stars richard burton holds film together
Reviewed in the United States on January 3, 2020
Verified Purchase
the most exceptional strength in this film is the sound and glory of Richard burton. then would be the other actors wonderful performances. billy Connelly was fine as the obnoxious petty thief. at the end I found no one need absolution for their place in this continually interesting story.
Read more
Helpful
Comment Report abuse

Deanna Nace
4.0 out of 5 stars Priest teaching at a Catholic boys school is harrassed.
Reviewed in the United States on August 14, 2019
Verified Purchase
Better than I expected. A very shocking movie with an unexpected twist at the end. Left me feeling angry at the boys for fooling around & playing mean tricks & sorry for the poor priest who was trying his best to teach the good word to young impressionable boys.
Read more
Helpful
Comment Report abuse

MK
5.0 out of 5 stars Loved it!
Reviewed in the United States on July 19, 2019
Verified Purchase
If you are a fan of Hitchcock, I highly recommend giving this movie a try!
Read more
One person found this helpful
Helpful
Comment Report abuse

M. W. Johnson
5.0 out of 5 stars Burton gives a brilliant performance!
Reviewed in the United States on January 24, 2020
Verified Purchase
Burton is excellent as a Priest who deals with a very devious adolescent. He doesn't fail to provide the suspense all the way to the very end.
Read more
Helpful
Comment Report abuse
See all reviews

Monty Marwood
4.0 out of 5 stars Absolution (Powerhouse Indicator Blu-ray)
Reviewed in the United Kingdom on October 8, 2018
Verified Purchase
One of the benefits of growing older is that films can be watched with a more experienced eye. On seeing Absolution on home video as a teenager in the early 80s I was somewhat underwhelmed and duly forgot about it. However, seeing it again nearly forty years later has given me a fresh perspective – it’s an above-average thriller with some serious themes going on, as one would expect from the pen of Anthony Shaffer, the writer behind Sleuth and The Wicker Man.

The movie’s setting of a Catholic boys’ school in idyllic countryside helps shape some of these themes, such as the hypocrisy of religious leaders and the expectations inherent within the boundaries of social status (both at the higher and lower end of the scale). This makes Absolution never less than interesting, helped by some great performances from Richard Burton (giving it his whole ‘fire and brimstone’ shtick) and the younger actors. There’s also a naturalistic turn from Billy Connolly, basically playing himself as he was at the time of the film’s production, and he also contributes a rather charming score on banjo that adds to the feel of the movie and its countryside setting.

The version of the film I watched was the Blu-ray release from Powerhouse Indicator and I can confirm that this presentation is as fine as one would expect from this particular company – there is a fair bit of filmic grain on show, especially during scenes set at night, but for me this is only to be expected from a film made in the late 70s and this grain would have been on the original print of the movie shown in cinemas at the time anyway. Extras on the disc are a tad thin, though interesting, and the booklet included as part of the release is particularly informative.

The Soft Machine Operator
5.0 out of 5 stars Underrated, obscure, British Thriller
Reviewed in the United Kingdom on October 30, 2018
Verified Purchase
I remember seeing this on VHS back in the 1980s when I was busy sweeping video shops for anything slightly horrific. This thriller is set in a Catholic boarding school where one of the boys (Stanfield) befriends a traveller played by Billy Connolly. This, of course, doesn't go down well with his teacher, played by Richard Burton and intrigues Dyson, a disabled boy who tries too hard to impress Burton's character and Stanfield . The setting, a remote school, is pretty atmospheric, and the characters are well played and interesting as they play against each other to a grim climax. Billy Connolly is a joy and provides some of the banjo music (The soundtrack, by Stanley Myers, helps maintain the atmosphere.)

This blu-ray is a superb package, with a thick booklet containing essays and interviews which highlight the film's troubled history (Originally planned in the early seventies, it was eventually made in 1978 and barely released, and ended up with the director and writer coming into conflict.) and the disc itself is full of extras - the interview with director Anthony Page is fascinating.

A fantastic release, and a film that stands up to repeated viewings.
Read more
Report abuse

Portland Bill
5.0 out of 5 stars Tense and surprising thriller
Reviewed in the United Kingdom on June 30, 2017
Verified Purchase
Talking about a film with confessions at its heart, I'll make one of my own...I had never seen this film before and initially only bought it because Dai Bradley was in it. Watching it had me enthralled from start to finish. It's hard to describe without giving spoilers for first time viewers but it's incredibly clever, tense and creepy and keeps you guessing right to the last minute, and even then I never saw the twist at the end coming. The isolated rural setting combined with the claustrophobia of the school adds to the tense atmosphere and the acting is superb all round. It asks a lot of psychological questions which you'll find yourself pondering afterwards too. The picture is a bit grainy but not to the extent that it troubled me, it's quite clear enough to see in detail and for a hard to find title, I'm just glad to have it.
Read more
One person found this helpful
Report abuse

Mr. Jonathon T. Beckett
3.0 out of 5 stars The body of the church
Reviewed in the United Kingdom on January 22, 2010
Verified Purchase
Father Goddard(Richard Burton) is a dour, pious Latin teacher in a Catholic Boarding School. He denies his pupils any luxury, denying them football on television and discarding the devil's aftershave. Among the pupils are confident, aloof teacher's favourite Benjie Stanfield(Dominic Guard),nervous, needy Arthur Dyson(Dai Bradley, rather wonderful) and posh, snobbish Cawley(Robert Addie). A travelling Biker called Blakey(Billy Connelly) comes into their lives, first being turned away from the school after looking for work, then setting up camp in the nearby woods, befriending Stanfield, much to Goddard's chagrin. Recriminations follow, leading to a series of dubious confessions, a psychological game of cat and mouse and worst of all the discovery of a body in the woods.
This is a pretty decent psychological thriller, with good perfromances, especially by the younger members of the cast,Richard Burton is also good, reverting to eye rolling mode after being rather understated for the first act of the film. Scripted by the brilliant Anthony Schaffer, the plot is a little thin for the running time allocated to it, but despite dragging a bit, its still a fascinating study into religious hypocrisy and the sancity of the confessional. There are a couple of touches that push the film into horror film territory as well.
The main negative aspect is the DVD release, with a very poor, washed out and jerky picture transfer being a real let down. This lowered my score, as it did with a previous viewer, as surely with a film only 30 years old, a better restoration job could have been done. 4 out of 5 for the film, 2 out of 5 for the release, rounded up to 3 out of 5.
Read more
15 people found this helpful
Report abuse