Accelerando (Singularity Book 3) and millions of other books are available for Amazon Kindle. Learn more
Kindle
$7.99 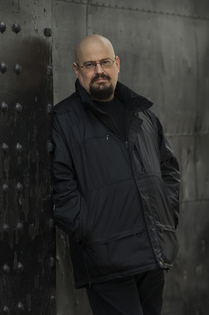 "Across the Winding River" by Aimie K. Runyan
A woman unlocks the mystery of her father’s wartime past in a moving novel about secrets, sacrifice, and the power of love by the author of Daughters of the Night Sky. | Learn more
click to open popover

“Stross sizzles with ideas…whimsical and funny as well as challenging and thoughtful.”—The Denver Post

“Like Bruce Sterling or William Gibson at their best, Stross surfs a wave of ideas and information that seems always on the brink of collapsing into incomprehensibility, but never does—a careening plunge through strangeness in which every page contains something to mess with your head.”—SF Site

Charles Stross was born in Leeds, England in 1964. He holds degrees in pharmacy and computer science, and has worked in a variety of jobs including pharmacist, technical author, software engineer, and freelance journalist. He is now a full-time writer.

Start reading Accelerando (Singularity Book 3) on your Kindle in under a minute.

4.1 out of 5 stars
4.1 out of 5
358 global ratings
How are ratings calculated?
To calculate the overall star rating and percentage breakdown by star, we don’t use a simple average. Instead, our system considers things like how recent a review is and if the reviewer bought the item on Amazon. It also analyzes reviews to verify trustworthiness.
Top reviews

Amazon Customer
5.0 out of 5 stars There is no "Singularity Series"
Reviewed in the United States on January 2, 2019
Verified Purchase
I got this as part of a trilogy, which Amazon called the "Singularity Series". I love all of these books, and knew exactly what I was buying (I own the physical books of all three) but I just wanted to point out that the listing is misleading, for those who may not be familiar. Singularity Sky and Iron Sunrise are the entirety of the Eschaton series, which Stross unfortunately decided not to continue, due to internal consistency issues. Accelerando is about the Singularity, but is unrelated to those two books (Glasshouse may take place later on in the Accelerando universe, but I can't say for sure, and it's definitely not a sequel). I mainly just wanted to give a heads up to fans of Singularity Sky and/or Iron Sunrise who might see the "Singularity Book 3" descriptor and think Accelerando was a third Eschaton book, which it is not. That being said, I totally recommend all of these books.
Read more
31 people found this helpful
Helpful
Report abuse

DonL2507
2.0 out of 5 stars A Disappointing Take on a Trans-Human, Super-Computational World. Lacks Coherence.
Reviewed in the United States on May 18, 2018
Verified Purchase
Why can't I find good science fiction in my older years. This was the third science fiction novel recently recommended to me that proved to be markedly disappointing. Where are the provocative and educational sci fi authors of my youth....the Isaac Asimov's, the Arthur C. Clarke's, the Ray Bradbury's? Even actual scientists could write better science fiction than "Accelerando", e.g., Fred Hoyle's "The Black Cloud" or Carl Sagan's "Contact." Oh well, I guess I'll keep searching. But anyway, despite some flashes of imagination (thinly) scattered throughout Charles Stross's "Accelerando", the book, at least to me, is a conglomeration, more accurately a disjointed jumble, of connected and disconnected plots enlivened, or more precisely obscured, by a fertile multitude of scientific labels and terms throughout the book. He just tosses off stuff left and right without even deigning to explore and explain the mechanisms and "the hows" of the various post-human and super-intelligent scenarios he describes. In my view, I think he tries to do too much in this book, by virtue of his multi-faceted scientific fantasizing, to lead to any semblance of coherence. The many positive reviews on this site mystify me. There must be a book out there that deals with a world characterized by, say, 10 million MIPS per gram of matter, i.e., almost a totally computational world, that's both coherent AND imaginative, but in my view this isn't it.

On a silly note, it is noted in the early stages of the acceleration to the Singularity that Manfred, the genius inventor and innovator, has developed a set of "algorithms" that enables the "non-coercive" central planning of an economy. Of course, toward the end of the book after much more accelerating technical progress, the same Manfred, in order to explore an extra-galactic world, says (P. 370): "If we win the election, we'll have the resources we need to do that." Apparently, the non-voters for his scheme somehow will not be coerced into giving up those resources, or perhaps Manfred (and Stross) have a different definition of coercive.

On a final note, this book attempts to explore the power, and potential malevolence, of trans-human (accelerated AI) intelligence. Perhaps we humans should be fearful of all-powerful trans-human intelligence. I've read that there's a cult in California (where else!) that pre-emptively worships super-AI, so that "we (humans) will be treated as pets and not livestock."
Read more
11 people found this helpful
Helpful
Report abuse

James R Petrarca
3.0 out of 5 stars Unsatisfying Singularity Back-Story
Reviewed in the United States on August 9, 2016
Verified Purchase
If readability were the only factor I considered in rating this book, I'd have given it only two stars. Frequent naps were needed to get through the book because it kept making me drowsy. But the author did try to imagine the unimaginable - that is, to conjure up a picture of the post-singularity future. So I'll give him credit for taking a stab at the impossible. That vision, unfortunately, lacks even the tiniest smidgen of credibility. It's just out-of-control imagination, and it's very tedious to read.

Iron Sunrise was by far the best book of the series. Its plot line and characters were intriguing, and it hinted that some race (the Remastered or perhaps their "gods") was able to hide events from the Eschaton and maybe even threaten or destroy them. This turned out to be a major, dangling plot thread that was never addressed in Accelerando. The lack of follow-up was very disappointing.

So Accelerando is the back-story for books 1 and 2. Pre and post singularity events play out, starting on Earth and spreading out vastly, that presumably lead to the rise of the Eschaton. But that eventuality is only very loosely implied by the ending, and the Eschaton is never actually encountered in book 3.
Read more
7 people found this helpful
Helpful
Report abuse
See all reviews

VonRichtoven
5.0 out of 5 stars I liked you before
Reviewed in the United Kingdom on June 19, 2017
Verified Purchase
This author has very respectable fantasy and sci-fi credentials but this is a masterpiece for a Radical Thinker and Futuroloigist; no simple sci-fi this.

What does A.I REALLY mean? What does acceleration of technological change actually offer? Now biological evolution seems to have been arrested by our control of the environment, what will deliberate evolution do to our future?

These are questions explored through following one man from a recognisable near future through to near-transcendence. The necessary legal and ethical challenges are covered in the authors well practiced engaging credible entertaining narrative manner. Family and dynastic issues illustrate some points. But this is a likely future, no 'warp' bypass reality cheats; this really could be where our grandchildren end up. And it is a NEW Unexpected but perfectly logical vision. For that reason alone 5* but it is well written and gripping.

Mr Stross, I liked you before, but this is not your run of the mill. It is a departure from your other work. It is a thoughtful MASTERPIECE: I salute you.
Read more
2 people found this helpful
Report abuse

J. N. Smith
5.0 out of 5 stars Singularity
Reviewed in the United Kingdom on October 17, 2020
Verified Purchase
There is a pervasive thought in current philosophy that as our (humanity's) mental efforts change the world about us, then that itself creates a change. This comprises an unstable feedback process, that accelerates and accelerates and then - well we don't know really. Weakly God-like beings?
This book covers the stage from after when the acceleration has become noticeable, to -um- later.
There are other books out there that approach the topic through a slice in time, or after the signularity has occurred. This is one of very few that climbs the curve.
I have always liked Stross's works. They cover a wide variety of themes. One of the best books I have read since the lockdown. Quite enthusiastically recommended.
Read more
Report abuse

Peter J. Holmes
5.0 out of 5 stars Possibly Stross's Best Work
Reviewed in the United Kingdom on September 27, 2015
Verified Purchase
This is quite challenging to get into at first but it is well worth persevering with. Stross tells his story at 10 year intervals and develops his themes in a very interesting and fairly believable way. Given that it was written over 10 years ago you have to credit Stross with not only imagination but also some pretty impressive insight into how the use of computers might and has grown.

Not as simplistic as the Laundry series (which I also enjoy) and with possible influences from Hannu Rajaniemi and Iain Banks amongst others, this is outstanding hard core science fiction.
Read more
2 people found this helpful
Report abuse

Whitehatter
5.0 out of 5 stars Just buy or download it. You won't be sorry with this brilliant piece of near-future sci-fi!
Reviewed in the United Kingdom on September 21, 2014
Verified Purchase
Bought this from Amazon a while ago and haven't as yet done a review. My bad. This is epic and ranks as one of my favourite Charlie Stross books.

Accelerando represents near-future science fiction at its very best. Charles Stross takes an idea, and like a prop forward in a rugby game he holds tight and runs forward with it. Only an author completely at home with his genre can write a book like this, and the way in which Charlie takes the idea of the increasing power of computing and information technology and basically lights a fire under it is gripping. From the beginning with an always-connected genius spinning off new ideas and patents right through to a solar system that is almost all converted to smart, computing matter, the scope of this book explodes from page to page.

I won't spoil it by giving a synopsis of who did what and when as that'll spoil it. However if I could give this book six stars I would. it's simply epic.
Read more
One person found this helpful
Report abuse
See all reviews

Page 1 of 1 Start overPage 1 of 1
Previous page
Next page
Pages with related products. See and discover other items: speculative fiction