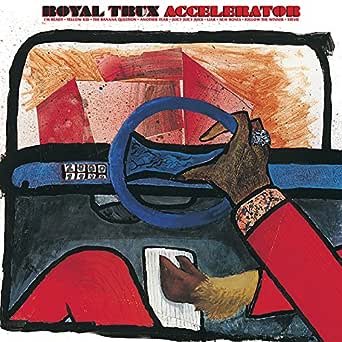 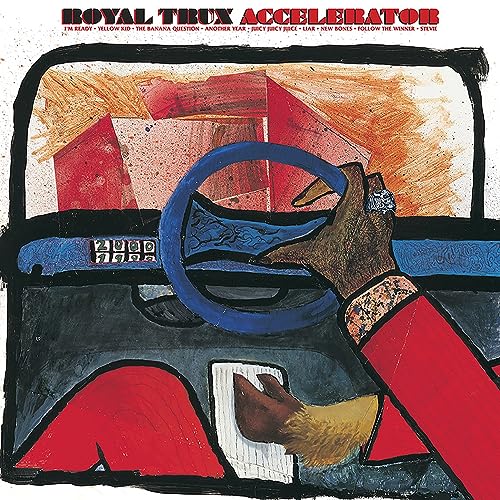 Royal Trux
April 21, 1998
4.9 out of 5 stars 15 ratings
See all 14 formats and editions Hide other formats and editions
Buy the Vinyl album for $19.98 and get the MP3 version for FREE.&nbspCD album ships from and sold by Amazon.com. Terms and Conditions. Does not apply to gift orders. Complete your purchase of the CD album to save the MP3 version to your Music Library.

@rocknrao
5.0 out of 5 stars It's a shame that bands like this don't exist anymore
Reviewed in the United States on August 24, 2012
I remember reading a Rolling Stone interview with the band MGMT where they cited Royal Trux as one of their big influences. It was that revelation that made me try and delve into MGMT's material in search of some connection. Alas, there wasn't much to be found. I'm sure they have an interesting list of other bands that they listened to regularly throughout the years, and I'm sure I would probably like a lot of them. However, they sound nothing like this. Nothing.

Royal Trux were truly a one of a kind phenomenon that could have only really happened in the 90's, when weirdness and aloofness were considered virtues for a rock band, and anything too popular with the mainstream was viewed as suspect. Those days are gone, obviously, but this album remains as one of the prime cultural artifacts documenting that period of time, and that particular mentality.

It is noisy, abrasive and wild, and yet sonically precise and infectious. The beats are huge and induce rhythmic body quaking, if not actual dancing. Each song sounds like it has a couple dozen layers of instruments all compressed down into one or two tracks. The lyrics are cryptic and inscrutable, but ring out like anthemic manifestos from a demented fever dream.

It's in your blood, it's in your brain, it drives 'em all insane, as Jennifer Herrema hisses on the catchy and dissonant Juicy Juicy Juice.

It leaves a taste in your mouth just like a burning tire, as Herrema and partner Neil Hagerty croon in unison on the jaggedly sentimental ballad, Liar.

New Bones is the song that has held up the best over the years in my mind, however. It seems to combine all the various elements that wormed their way into Royal Trux's music over the preceding decade. Repetitive, hypnotic rhythms. Echoing, squealing feedback that coalesces into strange little micro-melodies before dissipating into the ether. Snarling call-and-response vocals that seem to both taunt you and forewarn you at the same time.

They close off the album with a little bit of 70's style organ soul in the form of the plaintive Stevie, which could be about photographer Steven Meisel, or perhaps erstwhile action star-cum-auteur Stephen Seagal. It's probably one of the most purely melodic songs of Royal Trux's entire discography, and is the one I would recommend showing off to your friends to introduce them to the band.

Don't assume they'll walk away as fans though.

If they do, count your blessings to be so lucky to have friends like that at all...
Read more
3 people found this helpful
Helpful
Report abuse

N. Langston
5.0 out of 5 stars Probably their best
Reviewed in the United States on March 20, 2005
I have several royal trux albums and this is by far my favorite. This is one of these albums that you will play over and over again. "Juicy Juicy Juice", with its looped Trumpet part and cowbellfill, is probably the most memerable. Other great songs are "another Year" and "The Bannana Question". After "Juicy Juicy Juice", the Album gets a little more serious. Liar has a catchy guitar riff and good lyrics. Then comes "New Bones", Which is a pure sonic explosion, with Delayed guitars and great lyrics. Follow the winner is also another catchy rocker. Then the album closes with the Beatiful "Stevie". You will love this album, and It will make your poarednts want to kill you to.
Read more
2 people found this helpful
Helpful
Report abuse

Terence Burke
5.0 out of 5 stars THE definitive RTX album ...
Reviewed in the United States on September 29, 2000
...and quite possibly one of my top 10 favorite rock records of all time ...its THAT good! After alienating both sides of the rock world with their earlier noisier fare turning off all of those "musician types" and their later 70's classic rock reflections rubbing all of the underground hipsters pretentions into their faces, the 'Trux meet at the crossroads, and make an incredibly hook-laden, straight-up catchy rock n roll record, and then channel it through a wash of every intense, over-the-top effect imaginable. The result, an equally visceral, abrasive noise-mongers dream, yet at the same time with some of the most infectiously catchy songs the 'Trux have ever penned!! These songs STICK in your head! It really doesn't get any better than this, from start to finish. the inyour face rock of "I'm Ready" the Stones-ey balladry of "Lemon Kid" the sing-song chorus of "Banana Question" the brilliant/absurd cacophany of "Juicy, Juicy, Juice", the sonic waves of sound crashing over your skull with "New Bones", the ultimate catchy rock song "Liar", and the classic rock mello closer, "Stevie" ...this album is truly ... the best of every dimension of everything rock n roll, contemporary and classic, in one perfect package.
Read more
10 people found this helpful
Helpful
Report abuse

That Guy
5.0 out of 5 stars REALLY FUN, STRANGE, INFECTIOUS
Reviewed in the United States on September 5, 2002
I love the other reviews of ACCELERATOR. They hit the nail on the head. This album took a few listens for me to catch on to the catchiness of the album. It's great. Strange, strange strange, but in the TRUX hands it all sounds somehow, down home, in your basement music fun. Get this album.
Personal favorites: I'm Ready, Yellow Kid, Banana Kid, ANother Year, Liar and Stevie.
Royal Trux makes fun rawking music that offsets you at first, but places you in such a renewed position of hope for rock and roll. GREAT STUFF!
Read more
3 people found this helpful
Helpful
Report abuse

deinernyc@aol.com
4.0 out of 5 stars Royal Truxx Goes Pop?
Reviewed in the United States on March 2, 1999
any fan of royal trux will love this record. for those of you who have no idea who they are, first try to figure out how you ended up on this page and second buy this album because it is the perfect intro to this great band. it seems that neil and jen have developed a little more structure to their music than on previous discs. the album is still filled with haggerty's keith richards-esque guitar riffs and jen still has that hint of joplin in her voice but it is much catchier. if you develop an appreciation for these lords of chaos, you can then move onto twin infinitives or their first ep. enjoy
Read more
One person found this helpful
Helpful
Report abuse

T Cravens
5.0 out of 5 stars "...I hOpe tHat YoU Can convIncE YourselF..."
Reviewed in the United States on April 12, 2000
Just when you thought it was time to throw in the towel, Royal Trux comes out with one of the greatest rock and roll albums of all time. For a band to accomplish this twice (re: Twin Infinitives)in their "career" is unlikely, but they've managed to pull it off. If you've never heard Royal Trux, this is a good place to start. It's accessable enough to hook you, and wigged out enough to prepare you for some of their more challenging albums. It sounds like they had a lot of fun making this album. BUY IT!
Read more
One person found this helpful
Helpful
Report abuse

Chase Clark
4.0 out of 5 stars noise don fail me now
Reviewed in the United States on July 1, 2003
This album is really cool and it will annoy your friends.
Read more
2 people found this helpful
Helpful
Report abuse
See all reviews

Jason Parkes
5.0 out of 5 stars One of the great albums of the 1990s...
Reviewed in the United Kingdom on September 17, 2003
Verified Purchase
Royal Trux were one of those bands- like fellow Pussy Galore descendents The Jon Spencer Blues Explosion- who received much critical adoration from the music press. Sadly it didn't translate into noticeable sales, which is unfair when you heard a mildly similar (if more retro) band like White Stripes doing well at this kind of thang...
As with several Pussy Galore albums, some Royal Trux material falls into the admire (rather than adore) camp; Accelerator puts pay to all that...and now sounds like one of the highlights of the 1990s (& there will only be one Accelerator as far as I'm concerned- somebody tell Primal Scream!)
The album remains highly listable- Stevie is probably my fave track (it was hearing this on a sampler that made me buy this album); though tracks like The Banana Question, Liar, and Another Year are as great.
There's not really much to say- if you want forward-backward (at the same time) thinking regarding music, want to hear something that advances on both garage rock and 70s rock music...Accelerator is the one. This album was surprising as it wasn't lo-fi or distorted feedback-frottage (with additional screaming...)- heck, it's the Highway 61 Revisted of the 90s. Except better...
Read more
7 people found this helpful
Report abuse
See all reviews