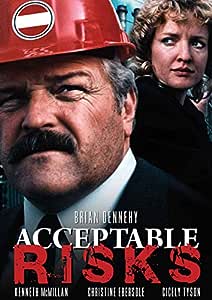 Brian Dennehy (Actor), Cicely Tyson (Actor) Rated:
NR
Format: DVD
3.8 out of 5 stars 5 ratings
Available at a lower price from other sellers that may not offer free Prime shipping.

Brian Dennehy (F/X movies, Gorky Park) is Don Sheppard, a chemical plant manager ordered to cut costs and sacrifice safety to keep up production. But when the plant starts leaking toxic waste into a nearby town and management tries to hush it up, Don decides to fight back. Cicely Tyson (A Man Called Adam) is Janet Framm, the city manager who tries to warn the town’s citizens of the possibility of a catastrophic accident, only to be silenced by the local politicians. Do they still have time to stop a toxic disaster from happening? Or is it inevitable? Kenneth McMillan (Dune) and Christine Ebersole (Black Sheep) co-star.

3.8 out of 5 stars
3.8 out of 5
5 customer ratings
How does Amazon calculate star ratings?
Amazon calculates a product’s star ratings based on a machine learned model instead of a raw data average. The model takes into account factors including the age of a rating, whether the ratings are from verified purchasers, and factors that establish reviewer trustworthiness.
Top Reviews

The Movie Guy
3.0 out of 5 stars CITICHEM FLEA MARKET AND BBQ
Reviewed in the United States on October 29, 2012
The interesting aspect of this film was the realism. Oakbridge, like many small communities are attached to their local one horse industry which supplies the town as its main source of high paying jobs. As such the town works with the industry giving it what it needs. In this case the plant was build out of town to provide a safety buffer, but as time went on the city encroached on the plant, putting people at risk and creating a population and situation not covered by their out dated emergency evacuation plans. This one goes one step further in that the local community fire department was unaware of the exact chemical dangers at the plant.

This plant makes a very toxic reactive chemical they call K-34 for short. When foreign competitors lower their prices, the Oakbridge plant must produce more for less, forcing workers to put in long exhausting hours and to bypass maintenance schedules. Since this is a story about an accident...

To add to the drama a romance develops between the boss (Brian Dennehy) and new employee (Beah Richards).

I liked the realism of the OSHA regulations and recommendations such as using the shower for 15 minutes. Their level A rescue suits were real and would be the ones they would use in that type of situation. The drama aspect was made for TV as was this film. The accident comes late into the film after you get to know the people who are affected by it. The film is not great action or drama, but one that attempts to make a statement.

Parental Guide: No f-bombs, sex, or nudity. Implied sex (2 people kiss, turn out the lights, then wake up in the same room.)