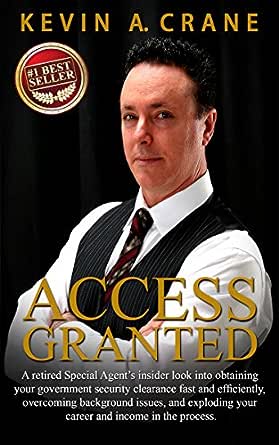 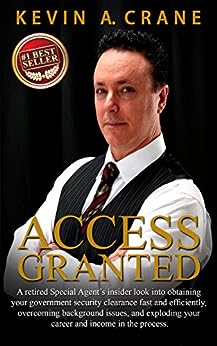 Special Agent Kevin Crane (retired) grew up in a small Catskills Mts. town called Hancock, NY. He attended The Pennsylvania State University where he earned his BA in Pre Law. Kevin spent his first year after graduating college working at Bamberger’s Dept. Store (now Macy’s) in Springfield, PA, as an under-cover security officer while learning to be a junior manager. He then accepted an offer from the I.E. DuPont Company in Wilmington, DE, where he worked for a year in corporate security. In 1985 he began his career as a U.S. Special Agent with the Defense Investigative Service which later became the Defense Security Service and finally the Federal Investigative Service under the Office of Personnel Management. During his 21 years of service to our country, Kevin conducted thousands of in-depth investigations for U.S. government security clearances. These investigations included interviewing over 10,000 references and subjects of investigation as well as thousands of financial, criminal, employment, educational, and medical records. During his career, Kevin has investigated every possible issue that the U.S. government covers and that you, the reader, may encounter during your security clearance process. Prior to his retirement in 2006, Kevin had worked eight years as an Assistant Special Agent in Charge of the Wrightstown, NJ, Investigative Field Office. He has been a long time member of the Fraternal Order of Police, 1st Federal Lodge, Philadelphia, PA. Kevin has practiced martial arts for 37 years, holds the rank of 3rd Degree Black Belt in the Korean style of Tang Soo Do, is a national certified AAU Taekwondo coach and referee, and is certified as an anti-child abduction instructor. He has taught thousands of students karate over the years to include community service work in 10 free anti-bully clubs he implemented for two local school districts. During his tenure as a federal agent, he also founded and was director of a non-profit agency to help the homebound and aging population by doing daily well-being checks. In addition to his public speaking engagements over the last 25 years, Kevin and his wife Phyllis currently own and operate a large child care center with over 200 children and a staff of 50. --This text refers to the paperback edition.

Lee Lambert
5.0 out of 5 stars Anyone looking for a clearence or thinking about getting a clearance, this book is a MUST!
Reviewed in the United States on January 1, 2016
Verified Purchase
This book contains wonderfully laid out instructions of the steps to take to get a government clearance. I was familiar with the process because I am from DC and have several family members with different levels of clearances. However, I was fascinated with the back end of why and what is analyzed from the investigator's side. Most people in the greater DC area should read this book and anyone outside of the DC area that is with a government agency or looking to work with government contractors such as Lockheed Martin should grab a copy and really go through the step by step to make sure you can pass the clearance, or give yourself your best chance to pass. Also, do read the book to know what to expect and what they will ask of your neighbors and friends. Most of all, I love how this book stressed honesty (full disclosure) above all else.
Read more
One person found this helpful
Helpful
Report abuse

William Lincoln
5.0 out of 5 stars The information is quite overwhelming YET you must patiently read ...
Reviewed in the United States on March 25, 2015
Verified Purchase
The information is quite overwhelming YET you must patiently read through it page by page to fully understand what this whole GRANTED ACCESS ebook is all about. If you're not interested about federal security clearance or who cares less about who's checking on you- then this is something off your cup of tea. However, this is an essential guide for everyone, especially to those who are applying for military services; changing careers and even to students with financial problems. One way or another, you will come across security clearance and this book will help you pass it i.e., make sure that your financial statement and your assets and income will match.
Read more
One person found this helpful
Helpful
Report abuse

Brian D. Satterfield
5.0 out of 5 stars A must have reference guide for every job seeker!
Reviewed in the United States on March 27, 2015
Verified Purchase
A must read for those folks seeking local, state, federal government work. I easily comprehended and follow Kevin's five facts along with step by step guidance on how to apply for a U.S. federal security clearance - he takes the fear and hassle out of it this process. Kevin provides real life examples in every chapter. Also, statistics in and about every chapter's topic, with a touch of humor! I didn't know there was a difference regarding potential incomes for people with and without a security clearance - being a person with a level 1 U.S. security clearance myself, I understand now!
Read more
2 people found this helpful
Helpful
Report abuse

C. George
5.0 out of 5 stars Working for your security clearance
Reviewed in the United States on March 6, 2015
Verified Purchase
I had no reason to read a book that demystifies how to apply for a security clearance, but this was recommended by a friend who thought I might still find it interesting. I found the book to be very straight-forward about how to get through a process that can be intimidating. This could have been written as a very dry, hard to follow “how-to” guide. Instead, Kevin’s personality and down-to-earth style make it easy to read considering the material it covers.

As a life coach and a travel consultant, I found a couple of bonuses in there for me. As a travel agent, I was recently in a discussion and research on “expunged records” because of inadmissibility of someone with a record to travel into another country that one of our clients wants to visit. As a life coach, I appreciate Kevin’s approach which is somewhat summed up in one of his sentences, “… I can help prepare you with the knowledge I am providing you in this book, but unless you take action to help yourself, none of this is going to help you.” Coaches teach, guide and help someone see more perspectives but it’s the recipient of the coaching who has to take action and responsibility.

I strongly suggest that “Granted Access” be mandatory reading for every high school and college student who is considering a government job or any job that could require a clean background even if it’s not going to require this high of a security clearance. Reading this early enough may help you to avoid some of the pitfalls you’ll later need to clean up! If there already is some “cleaning up” you need to do, this book can guide you on how to get past your history defining your future.

However, the knowledge of what you’ll need and how to complete the steps to gain a security clearance are beneficial for people of any age. Kevin is the big brother, uncle, mentor who is in your corner offering you guidance on this process.
Read more
3 people found this helpful
Helpful
Report abuse

Honest Reviews
4.0 out of 5 stars Well written
Reviewed in the United States on September 6, 2018
Verified Purchase
A good explanation of the process of obtaining a security clearance.
Read more
Helpful
Report abuse