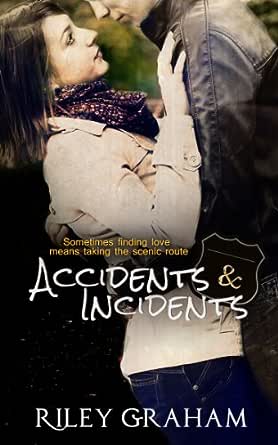 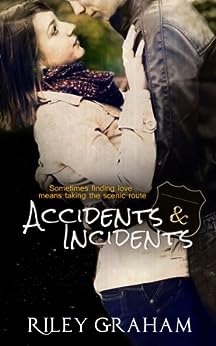 "This is a YA book that acknowledges without apology that life is messy and emotional ... I'd definitely recommend it to contemporary YA fans." - To Each Their Own Reviews --This text refers to the paperback edition.

Riley Graham lives in North Carolina with her husband, two dogs, two cats, and an embarrassing number of dust bunnies. She likes books, TV marathons, diet soda, and naps. Find out more at www.rileygrahamwrites.com. --This text refers to the paperback edition.

cbsone
5.0 out of 5 stars Excellent Novel for Teens and Pre-Teens
Reviewed in the United States on January 29, 2014
Verified Purchase
I enjoyed reading Accidents Incidents very much! It was true to life to teenagers going through school now. It was easy to read and I found myself cheering for Leslie and Dennis and was so glad when they got together in the end. My favorite part about the book is that it teaches that everyone has their problems even the people who seem perfect and those who are mean. We really are not all that different. I look forward to reading more from Riley Graham!
Read more
Helpful
Comment Report abuse

Ashley M.
4.0 out of 5 stars Wonderful Read for Teens and Adults Alike
Reviewed in the United States on January 10, 2014
Verified Purchase
Although intended for young adult readers, adults will find sanctuary in this novel! As an adult reader, I was drawn back to my teenage days. The characters in Accidents & Incidents are so well-developed and realistic that I immediately made connections with the "characters" in my own past. I found myself completely empathizing with Leslie's thoughts and emotions as she dealt with her attraction to different boys, struggled in her tumultuous relationship with her single mother and tried to find her place in a high school world.

Miss Riki
4.0 out of 5 stars Loved this Clean Contemporary YA!
Reviewed in the United States on January 8, 2014
Leslie is used to watching her step, living with her strict mother and navigating the social minefield of her high school. She wants more from life than the popularity that comes from a boyfriend she might not even like that much, but can’t help but feel welcomed into the group lead by her longtime crush, Cain. When Cain starts to notice Leslie she can’t help but feel good, but things get complicated when she befriends Cain’s girlfriend. Add in the mysterious new guy, Dennis, who seems to get Leslie despite her misgivings and all of a sudden life and love just got a whole lot more complicated.

I really enjoyed Accidents & Incidents! Riley Graham has created a cast of characters that are not only realistic and relatable, but truly likeable as well. From the first page I was invested in the outcome for the protagonist Leslie. She’s sweet and fumbling like any teenage girl might be and has a strong desire for something more in her life. I especially enjoyed the relationship between Leslie and her mother. Although her mother is at times nitpicky and demanding of her daughter, I could feel the love that backed up her actions and wanted so badly for she and Leslie to get on the same page. When Leslie’s mom finally starts to get the breaks in life that she deserves I cheered for her and for Leslie as well.

Accidents & Incidents has a central love story that is both endearing and complicated. I found myself rooting for Leslie as she slowly figured out which boy was really right for her. Teenage love in real life is complicated and I found this book to reflect all of the roller coaster emotions of that. I like that the romance is a central storyline but that it doesn’t dominate the entire novel. The reader is drawn into Leslie’s entire life, including friends and family, with the romance rounding out the perfect equation. Every relationship is well-roudned and moves the story forward.

I would recommend Accidents & Incidents to both young adults and adults alike. It is a clean contemporary romance suitable for any age level. Teens will relate to Leslie and her struggles and adults will be drawn back to a time in their life when everything is uncertain in that familiar teenage way.
Read more
3 people found this helpful
Helpful
Comment Report abuse

Vanya Petkova
2.0 out of 5 stars Too slow to develop, weak characters
Reviewed in the United States on December 9, 2014
NOTE: I received this title via Netgalley in exchange for my honest review.

I'm not sure I expected anything at all from this novel. I wanted it to be good, of course, but I didn't start up with any inner feeling in mind. I'm glad it was so, because at least I wasn't disappointed.

I didn't see how the title had anything to do with this no-action story. It implied that something was to happen, but well... nothing did and that - combined with the slow development of events - completely lost my interest. It's actually a miracle I didn't put it down half-way through.

Writing style:
It was pretty fluent and clean and I could tell the author was well versed.

Story line:
In my opinion, that's where the major weakness was. Several times I felt compelled to just not finish because it really lead nowhere. It was excruciatingly slow to develop and quite painful to follow. No twists and turns, no action, no sweet romance. It was just some story.

Characters:
Dennis was the new guy with the secrets, who never ever took the initiative to show his 'obvious' feelings to Leslie. To be honest, I'm not sure why anyone thought Dennis even had any feelings for her. He merely swapped a couple of sentences with her every now and then.

Keith was a non-consequential character. Leslie's ex-boyfriend, who kind of cheated on her. I'm not sure why so much attention was paid to him or why Leslie was with him to begin with. The only thing they did was fight.

Cain was the resident flirt. Bad boy to the core, it was outside of my understanding why all the girls wanted to be in a relationship with him when it was obvious he was not going to be faithful.

Leslie was the most insecure character I've ever met. She could never ask for something she wanted, but then she was always complaining how things didn't work out the way she wanted. Well, grow a backbone and start doing your own thing, geez!

Meredith was one more girl who didn't give herself enough credit. Being Cain's girlfriend must've been tough. Yet she endured, for whatever reason. I didn't understand why she'd make herself miserable like that. Perhaps she liked being hurt?

In Conclusion:
I don't know who to recommend this book to since I didn't enjoy it at all. Perhaps readers who don't crave for action and twists? I don't know.
Read more
Helpful
Comment Report abuse
See all reviews from the United States