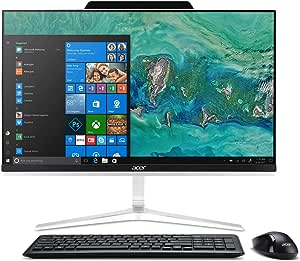 Visit the Acer Store
4.0 out of 5 stars 47 ratings
| 37 answered questions
Currently unavailable.
We don't know when or if this item will be back in stock.

A Modern Design for the Modern Family

4.0 out of 5 stars
4 out of 5
47 global ratings
How are ratings calculated?
To calculate the overall star rating and percentage breakdown by star, we don’t use a simple average. Instead, our system considers things like how recent a review is and if the reviewer bought the item on Amazon. It also analyzes reviews to verify trustworthiness.
Top reviews

Matthew Davenport
5.0 out of 5 stars The Latest tech in all in one
Reviewed in the United States on April 2, 2019
Verified Purchase
I absolutely love this thing. Only my second day with it but I came from a HP Pavilion 13" Convertible with a Intel Core i3 6th Gen processor and needed something with some more power. The monitor is incredible and huge with 4k capability and true HD. The 8th Gen Intel Core i5+ is the most recent chipset generation and is actually more powerful than a regular Core i5 8th gen with the addition of Intel Optane Memory that helps the HDD act like a SSD with boot up and app start up times. Dolby Premium Dual Speakers in the back offer great sound quality with ability to add Dolby Atmos for headphones. Lots of space and power with Turbo Boost tech from the i5 processor when needed. I saw other lesser Acer AIOs with Intel Core i5 that didnt have these features and this was discounted $200 or 22% from MSRP of nearly $800 and I feel i didnt have to sacrifice anything i really wanted at a slightly higher price than the ones without.
Read more
13 people found this helpful
Helpful
Report abuse

Eugene F. Kranz
1.0 out of 5 stars New computer with Operating System problem
Reviewed in the United States on June 4, 2019
Verified Purchase
After power up on second day received a message, "OS did not shut down cleanly. Reconstructing cache metadata. Do not interrupt this process. Periodically the shutdown and power up was normal. After 30 days of on and off issue above I initially contacted AMAZON to troubleshoot. Had language difficulty and no success. Then went to ACER, troubleshooting options were limited so I returned. I am writing a book and wanted a clean machine, no Apps except those installed , Office 365 and NORTON. Issue is fundamental to machine and should have been caught prior to sale
Read more
11 people found this helpful
Helpful
Report abuse

CG3055
1.0 out of 5 stars worst computer I have owned
Reviewed in the United States on May 16, 2019
Verified Purchase
Just bought this and computer, runs very slow. Called Acer, they had me reinstall windows, said it was a software issue. No better results so I sent it in for service and nothing really was done. Still as slow as ever. I have a 4 yr. old laptop and ran it side by side with this and it accomplished things in one third the time. I am going to take it to a repair shop and see if they can help. I will update this review when I have more info. Also has a inferior keyboard, not backlit and doesn't have light on caps lock so you don't know if it is on or not.
Read more
8 people found this helpful
Helpful
Report abuse

Joseph L. Zipfel
5.0 out of 5 stars Great all in one for the price.
Reviewed in the United States on April 1, 2019
Verified Purchase
Got this on sale at Amazon and so far it has been great. Very fast with the Optane memory and set up was easy. The overall look is very sleek with the small bezel and thin design.
Read more
6 people found this helpful
Helpful
Report abuse

Audra Michelle
3.0 out of 5 stars Love hate relationship
Reviewed in the United States on January 25, 2020
Verified Purchase
I want to give this computer a better review, but unfortunately I have found, after owning it for about 2 months, that it has had some weird, glaring flaws that have made me somewhat regret my purchase of it. Initially, it was lightening fast, smooth to navigate, and everything I had hoped to get! But after downloading some applications here, saving/shooting/editing some photos and videos there, slowly but surely it started to show its true colors. I've had to do a hard reset multiple times due to the screen freezing for a loooooooong time. I've thought I had a virus due to very strange, very aggravating malfunctions, like chrome browser tabs infinitely opening after selecting the icon only once, or changing tabs every few mins alone- To my surprise, after my pup had accidentally unplugged it from the wall while it was on, and I didnt plug it back in/turn it back on for a couple days, when I did finally boot it up it worked just fine. I actually havent had any issues since then.... but I'm just waiting for it to take a crap tbh.... Like I said, I want to love this computer more, and I've yet to return it still.... 🤷‍♀️ You pay for what you get though, more or less, and I feel that's what happened in this case.
Read more
One person found this helpful
Helpful
Report abuse

Amazon Customer
1.0 out of 5 stars Slower than the old pc it was supposed to replace
Reviewed in the United States on September 3, 2019
Verified Purchase
This desktop is incredibly sluggish.
It lags in doing everything, including just opening word doc.
This is driving me crazy because my 6+ year old ASUS AIO outperforms this by miles. My old desktop has no noticeable lag like this. I can't believe how much worse this is compared to my old computer. I am extremely disappointed.
Read more
6 people found this helpful
Helpful
Report abuse

Jet
4.0 out of 5 stars Family loves it, all around favorite for this price range.
Reviewed in the United States on July 12, 2019
Verified Purchase
The screne is crisp and colorful with HDR video. The processor is a great improvement, adding some considerable speed when combined with the 8 GB of DDR4 and 16 GB Optane Ram. Overall a well rounded choice. I only wish it had a larger, say 27 inch screen with 4 K HDR10 capabilities. I can't justify the $1200 increase in price to achieve it.
Read more
4 people found this helpful
Helpful
Report abuse

Lilith
4.0 out of 5 stars Great basic computer for everyday use...
Reviewed in the United States on July 8, 2019
Verified Purchase
I like this computer, it’s fast, but it has some weird downfalls. First of all, it took me a while to figure out how to get my earphones to work, I had to play with the settings for a while before it all made sense, forget it if you think you can just plug and play. I also have sound issues as I use it for writing and editing music. The sound tends to stop working when I’m in the middle of production. Then I have to reboot the whole computer. I think I will just buy an apple in the future for music, but as a basic everyday computer it’s actually pretty great.
Read more
2 people found this helpful
Helpful
Report abuse
See all reviews

Wellesley Dashney
5.0 out of 5 stars Runs great.
Reviewed in Canada on December 2, 2019
Verified Purchase
Business
Read more
Report abuse
See all reviews
Back to top
Get to Know Us
Make Money with Us
Amazon Payment Products
Let Us Help You
EnglishChoose a language for shopping. United StatesChoose a country/region for shopping.
© 1996-2021, Amazon.com, Inc. or its affiliates