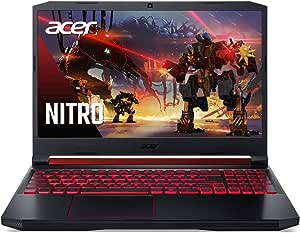 Take The Game To Them

Soar to new gaming heights—anytime, anywhere—with the Nitro 5. This ultra-cool machine is sure to catch your eye with its sleek, mobile design, 15.6” Full HD IPS Display, and a wide range of gaming-rich features to put you in total command of the action. Leveraging the power and speed of its 9th Gen Intel Core processor and high-performance NVIDIA GeForce RTX 2060 graphics—that’s driven by NVIDIA Turing architecture.

The Key to Victory

Commands are just a touch away with the dedicated NitroSense Key, while the WASD and arrow keys are highlighted for easy location. Enjoy the tactile feel of keys with a travel distance of 1.6mm. Add some excitement to your gaming and play in dimly lit environments with the red backlit keyboard.

4.5 out of 5 stars
4.5 out of 5
419 global ratings
How are ratings calculated?
To calculate the overall star rating and percentage breakdown by star, we don’t use a simple average. Instead, our system considers things like how recent a review is and if the reviewer bought the item on Amazon. It also analyzes reviews to verify trustworthiness.

I am not a hardcore gamer. I only probably play 2-3hr sessions every other day if not like twice a week. I noticed that games like Valorant bring the CPU temp to an average of 75 Celsius. I can only imagine what happens if you play a higher demanding game like Warzone.

Fan noise is as I expected with a gaming laptop. when you game it is loud, but if you game with a headset you will not hear it and it is not detectable on your microphone. When you are using the laptop for everyday use, every now and then the fan will turn on but on the quietest setting to cool things but turns off after several minutes. I am getting used to it though.

As mentioned at the top, SSD storage is small in comparison to competitors' laptops. It will not be a problem if you play only some games, but if you play alot, I recommend getting an additional SSD. You can easily find SSDs between the $100-$150 range, just make sure you know or have a friend who knows how to properly install it.

The only reason why I give it 4 stars is because the battery life is very short. It does not deliver the 8 hours as described; more around 4 hours at most. I always play while plugged in. Playing unplugged will probably make the battery life even shorter! The only reason I noticed the shorter battery life was because I used a Macbook before this and their batteries last around 10 hours. I dream of the day that Acer rids of the 2.5” drive bay for a bigger battery :)

I am super stoked to be an owner of this Acer Nitro 5. It has its quirks for sure, but for me, they are overshadowed by the perks. If you are a relatively casual gamer I really think you will like this just as much as I am liking it.

The LCD panel is model "NCP004D" from Panda. A reviewer at NotebookCheck tested that display panel, and found a Black to White response time of 16.8ms, and a White to Black response time of 13.2ms, for a round-trip total of 30ms. This means that despite being 144Hz, the time it takes for the pixels to fade in and out makes it look no better than a 60FPS display. While testing a scrolling image, 72 FPS and 144 FPS looked indistinguishable, as well as 60FPS and 120FPS looking indistinguishable as well.
The AN515-44-R5FT also has the same LCD panel, and I was only able to discover this information by reading reviews of that product.
There's also some backlight bleed, but it's only noticeable in a dark room with a dark screen. The backlight bleed was not annoying enough to be a problem.
Additionally, the display is only 6-bit color, not 8-bit.

Aside from the disappointing LCD screen, it has great components inside.

The SSD is a real speed demon. Despite being only 256GB large, it read at 1077 MB/sec, and wrote at 671 MB/sec (372 MB/sec sustained).
The touchpad is okay, it's less laggy than one I previously had on a Dell laptop.
The keyboard has dark red key caps that are difficult to read. With every laptop having a different layout for where to place Insert/Delete/Home/End/PageUp/PageDown keys, you'd need to read the keyboard to find those keys. Having those in dark red makes it hard to find such keys.
Additionally, the Volume keys need two hands to press, as the Fn Key and the Up/Down keys are too far apart that you can't reach them with one hand.
My old laptop had keys arranged as "Insert, Delete, Page Up, Page Down, Home, End", while this laptop has them arranged as "Delete, Home, Page Up, Page Down, End, Power". I use Home and End a lot, so I keep reaching in the wrong place to try to press those keys. I had to disable the Power key, because I kept hitting it otherwise. I could get used to a different keyboard layout over time, it would just take a while.
Aside from those issues, the keyboard has a very good feel. There is plenty of travel distance, making it satisfying to type, and all keys on my product worked fine.
I had extremely low expectations for the speakers, but was surprised when I heard them. Bass notes under 100hz are actually audible on this model. Very quiet, but audible. I bet audio quality could be improved further with proper calibration.
The USB ports and Power port were very tight, and required greater than usual force to insert the power adapter, or insert a USB device, they also made somewhat crunchy noises.

John Campbell
5.0 out of 5 stars Excellent Laptop - Incredibly Fast
Reviewed in the United States on August 7, 2020
CPU: Intel Core i7 9th GenCapacity: 15.6-inch 144HzStyle: Notebook onlyVerified Purchase
First thing that I did was upgrade the main M.2 NVMe 256 gb Drive to a Samsung NVME Drive (970) and added a 2nd M.2 NVMe Drive. I also upgraded it to 32 GB of RAM (wish it supported more)... I also upgraded to Windows 10 PRO (I preserved the old drive never run, so when if I ever sell it, it has factory everything). Very very fast boot up and runs great.... There was just 1 Glitch.... When I went to Activate Windows, it would not activate on WIFI... Tried several times and there were no connectivity issues with the WIFI, however, I finally connected to Ethernet via CAT 5 cable and it activated the first time, so if you experience issues simply use a CAT 5 connection.

I really like the Background Lighting on they Keyboard... The Blue Tooth works great. Have a Bluetooth Mouse to save the extra USB port. The USB 3 Ports are very fast. Installed full copy of windows 10 in about 10 minutes and the unit with the NVMe drive boots to windows almost faster than you can see it. Very reliable and quite operation. The screen is very high quality and at 144 Hz has no flicker that I can see and is very comfortable to look at.

Every unit has its downside... In this case it is hard to figure that one out. The worst part is the Power Supply brick is much larger and heavier than expected... But then again, being an IC Processor with an NVidia 2060, I guess it needs all it can get... With all that processor power and Video Card the computer cooling system works great, and the laptop actually runs much cooler than expected.

I highly recommend this laptop... Very quite operation... With 2 Fans and you cannot hear it at all. This is the Best laptop that I have ever owned.
Read more
20 people found this helpful
Helpful
Comment Report abuse
See all reviews