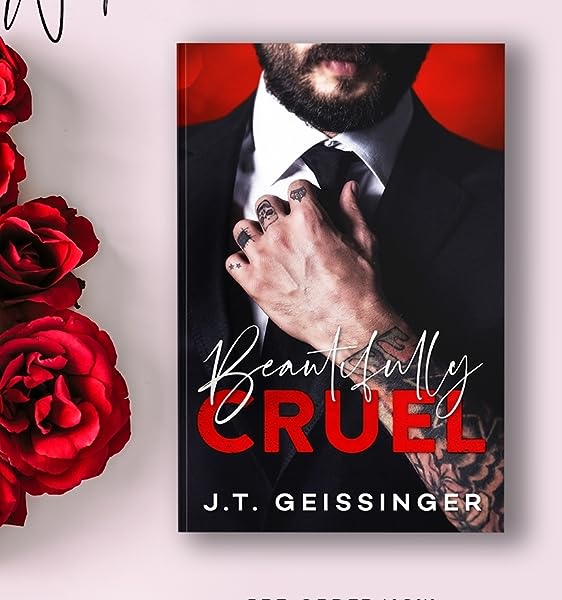 J.T. Geissinger writes unique, passionate love stories for readers who need more than cookie-cutter romance. Ranging from funny, feisty rom-coms to intense, edgy suspense, her books have sold more than one million copies and been translated into several languages. She is the recipient of the Prism Award for Best First Book and the Golden Quill Award for Best Paranormal/Urban Fantasy and is a two-time finalist for the RITA Award from the Romance Writers of America. She has also been a finalist in the Booksellers’ Best, National Readers’ Choice, and Daphne du Maurier Awards.

Join her Facebook readers’ group—Geissinger’s Gang—to take part in weekly Wine Wednesday live chats and giveaways, find out more information about works in progress, gain access to exclusive excerpts and contests, and get advance reader copies of her upcoming releases. You can also check out her website, www.jtgeissinger.com, or follow her on Instagram @JTGeissingerauthor and on Twitter @JTGeissinger.

Start reading Ache for You (Slow Burn Book 3) on your Kindle in under a minute.

4.4 out of 5 stars
4.4 out of 5
470 global ratings
How are ratings calculated?
To calculate the overall star rating and percentage breakdown by star, we don’t use a simple average. Instead, our system considers things like how recent a review is and if the reviewer bought the item on Amazon. It also analyzes reviews to verify trustworthiness.

Marie-NMST blog
5.0 out of 5 stars Addictive, sexy and incredibly funny!
Reviewed in the United States on November 6, 2018
Verified Purchase
So addictive and incredibly funny with the perfect amount of sexy! There was so much sexual tension between Kimber and Matteo even I felt the ache.

Matteo was perfection. A noble blooded Italian that oozes sex appeal with a heart as soft and vulnerable as a puppy..I could TOTALLY get under that!! I fell for him instantly.

And Kimber? That poor girl. Within days her life was turn to chaos but her stubbornness was much stronger than the chaos around her. She put up a fight to get her world turned right side up and kept me laughing the whole time.

These characters had so much personal and chemistry I was more than addicted to the story. Don’t tell, but I even ignored work as often as I could just so I could keep reading. Even the supporting characters had their own drama that pulled me in.

I have enjoyed every single story in this series and this one topped them all.

OLT
TOP 500 REVIEWERVINE VOICE
2.0 out of 5 stars I should have reread MELT FOR YOU instead.
Reviewed in the United States on November 15, 2018
Verified Purchase
(I really enjoyed J.T. Geissinger's MELT FOR YOU and liked BURN FOR YOU, the first two books of this series. That's probably why this third one disappointed me so much.)

What on earth happened here? It's as if the author dug down deep into THE CR BOOK OF STOCK CHARACTERS to populate her story here. The heroine, Kimber DiSanto, in particular, was not a top-of-the-line storybook female. She needs anger management classes, tact and diplomacy classes, a personality makeover so that she's less self-centered and more empathetic, and she needs a bar of soap to periodically wash out her potty mouth.

I'll grant you that Kimber has very recently been put upon by life. Her fiance dumps her at the actual wedding ceremony, her father in Italy is extremely unwell, her dress shop in San Francisco burns down. Fortunately, she doesn't have a dog or it would have died.

Kimber is a boutique owner and a clever dress designer. She keeps a sketchbook with her at all times in case she feels a creative design coming on. At the airport she's waiting to catch her flight to Italy to see her father when a very handsome man (very, very handsome. We shall be told throughout this book how very, very hot and good-looking he is.) approaches her, comments on the dress design she's working on and also proceeds to hit on her. not very subtly.

She proceeds to shoot him down. I guess he deserves it but she could have been a bit more polite in her rejection. And then when she's bumped from her flight, this very, very handsome guy offers her his first-class ticket but only in return for her sketchbook. So, very ungraciously, she accepts the ticket and, resentfully, hands over her sketchbook, because she's desperate to get to her father before he passes away.

Long story short, she makes it to the hospital to say her goodbyes and also learns she has a new stepmother. Her now deceased father, BTW, had a dress shop with declining sales which he has now left to her along with his home, with the proviso that his new wife must be allowed to live there as long as she wishes.

The biggest annoyances of this book were (1) the abrasive personality of the heroine and the puzzle of why the hero would be so attracted to such a shrewish termagant, (2) the secretive behavior of the very, very handsome hero, (3) the ex-fiance and his behavior after the dumping of Kimber. My favorite part of the book: Kimber's "stepsisters". I won't tell you who they are but they were the most appealing characters of the book.
Read more
30 people found this helpful
Helpful
Comment Report abuse

wbl
3.0 out of 5 stars 2.5 stars
Reviewed in the United States on November 14, 2018
Verified Purchase
I have read lots by this author and enjoyed her writing but not this story. The main issue I have is with the hero. Now other reviewers have disliked the heroine and commented on her immaturity. However I give a pass to the heroine. Having recently lost my own father I know we don't always react rationally at such times and can have huge emotional swings. The hero however gets no such pass. He is pretty heavy handed in his attempted seduction when he first meets the h; to the point his actions border on harassment. Not much later in the story, knowing by this point that her father has just died, he makes another heavy pass at her. These are not the actions of a hero. In addition having bought her sketch book he plans to use her designs. Now this may be legal (in my country selling a picture does not pass copyright in that picture but the US and Italy may be different) but it is certainly unethical. Again not the actions of a hero. I also find it ridiculous that by the 46% mark, despite being a famous designer there is no hint of him doing anything to run his business, no meetings with with his design team, no planning for the Milan fashion week, no scenes of him in the workroom pinning or cutting fabric. In other words the author has used his profession as mere window dressing with no depth to her writing or characters.

The other annoyance in this story, and it is something which often features in this author's writing, is the sledgehammer approach. She doubles down on awful events. The h doesn't just lose her father but is dumped at the altar, her business goes up in flames and she is saddled with a step mother she doesn't know. A little less drama would make for a better story.

This was a DNF for me.
Read more
18 people found this helpful
Helpful
Comment Report abuse

Denise H
5.0 out of 5 stars Wow! Awesome
Reviewed in the United States on November 6, 2018
Verified Purchase
This book had me on the edge wondering if Matteo was using Kimber or if he really liked her. The chemistry between them is off the charts! I loved the fighting and bickering they did between each other it was so cute. Loved how she would try and boss him around and not put up with his crap, and call him count just to piss him off lol.i was excited when Kimber finally realized she was in love with Matteo . They complete each other. Such a great book.
Read more
22 people found this helpful
Helpful
Comment Report abuse

Susan Agnew
5.0 out of 5 stars Loved it
Reviewed in the United States on November 6, 2018
Verified Purchase
You will laugh and cry reading this book. JT is a wonderful author. I couldn't put it down. Sassy and snarky and sexy. What more could you want.
Read more
19 people found this helpful
Helpful
Comment Report abuse
See all reviews

S. Lacey
5.0 out of 5 stars Brilliant!
Reviewed in the United Kingdom on November 8, 2018
Verified Purchase
I enjoyed this book so much! I laughed and I cried! Kimber and Matteo were good for each other because they pushed each other to be better and to open up. Admittedly, they both could have gone about things better as there were a lot of misunderstandings and tempers got in the way, but they made it in the end. Their chemistry was off the charts! I also adored Kimber's best friend Jenner, he had some great lines! I love how it all worked out with everyone in the story, such a great read!
Read more
One person found this helpful
Report abuse

L beaver
5.0 out of 5 stars Good read.
Reviewed in the United Kingdom on November 24, 2018
Verified Purchase
Kimber finds her life suddenly going pear shaped and after getting a call to say her father is ill she's off to Italy. Problems at the airport has her bargaining with a very handsome stranger. She is shocked when she sees him again at her father's estate and they clash about everything. It's a lovely, romantic story. The banter between the two of them is sharp and really good. I like the writing style of this author and I'm already looking at her other books
Read more
One person found this helpful
Report abuse

J B
5.0 out of 5 stars Brilliant
Reviewed in the United Kingdom on April 27, 2019
Verified Purchase
Kimber has an horrific month of loss and heartbreak in which she also has a chance meeting with Matteo . Thinking he is paparazzi she does everything to avoid him with shock results.
Another humorous addition to the slow burn series with a Lovely love story building throughout.
I will definitely read more by J.T.Geissinger as I really enjoy her sense of humour, it really lifts the story's and makes you smile.
Read more
Report abuse

Liz F
3.0 out of 5 stars Not as good as the first 2 in the series
Reviewed in the United Kingdom on January 16, 2019
Verified Purchase
This was entertaining enough and I enjoy the writing style. I just didn't find the main characters or the situation very credible. It was a bit too like the billionaire romance stuff that is churned out, and not as rounded as the two previous books in the series.
Read more
Report abuse

Kaz
5.0 out of 5 stars Wonderful
Reviewed in the United Kingdom on May 18, 2019
Verified Purchase
First time I've read this author,great story and brilliant characters,so funny couldn't stop laughing with what kimber came out with that mouth as matteo kept saying lol xx
Read more
Report abuse
See all reviews