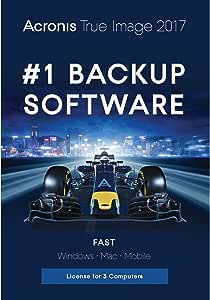 Add to Cart
$39.90
& FREE Shipping on eligible orders. Details
Sold by: dealsmart888
Have one to sell?
Sell on Amazon

Acronis True Image, the fastest, easiest, and most complete full image backup software available. Back up everything - operating systems, applications, setting, photos, social media feeds, smartphones, and tablets. Our Dual-Protection ensures complete protection, saving your files locally and on the cloud. Back up to local storage, NAS, or Acronis Cloud Storage. Recover your computer to the point it was at before a data disaster. Backup technology innovation for 14 years and 5.5 million customers.

4.2 out of 5 stars
4.2 out of 5
371 global ratings
How are ratings calculated?
To calculate the overall star rating and percentage breakdown by star, we don’t use a simple average. Instead, our system considers things like how recent a review is and if the reviewer bought the item on Amazon. It also analyzes reviews to verify trustworthiness.

2ndreconmarine
4.0 out of 5 stars Don't Get This Version. Get 2014
Reviewed in the United States on December 17, 2017
Size: 1 ComputerVerified Purchase
I have used Acronis backup before; the last version was 2014, which worked great. I had hoped that this version would be as good. However, Acronis has decided that the ONLY method for performing backups will be to use a Cloud service. Such as their Cloud service, which you can pay additional money for. It no longer supports backups to DVDs, or in my case, Blue-Ray disks. I like Blue-Ray backup because it doesn't take a lot of disks and I control the location of the backup. Sensitive files can go in my safe. But, although this advertises it will work with external drives, the fact is that it does not. Moreover, when I contacted their rather mediocre technical support, they pretty much admitted it. Their suggestion was to back up my hard drive to my hard drive and then manually copy to the Blue-Ray disk. Or, I could backup to their Cloud service and then manually copy to my Blue-Ray. Then, to recover files, I would perform the process in reverse: copy from my Blue-Ray to their Cloud and restore from the Cloud.

The second concern is that this is an incredibly intrusive program. When running Task Manager, I found no less than 6 background processes running all the time for Acronis. I do not know what they are all doing, but they seem to be communicating over my WiFi. Moreover, there are some that show up in my TaskBar. And, they cannot be removed from the TaskBar.

What I wanted was a simple backup system. I run it. It compresses and writes files to my Blue-Ray, and then it goes away. This is something else entirely. Unfortunately, Acronis has ruined what had been a reasonable product.

UPDATE: I spoke to Acronis customer support. They allowed me to "downgrade" to True Image 2014. That version does just what I want it to, and has much less "intrusiveness". (The Task Bar item is gone, for example.) It still has a couple of background processes, but these allow full cloning of your hard drive. Moreover, now id does backup to a DVD / Blue-Ray. So, I have upgraded my assessment to 4 stars.

Liem
5.0 out of 5 stars Software works well after hickup with license activation issues
Reviewed in the United States on February 6, 2017
Size: 5 ComputerVerified Purchase
I spent all morning (3.5 hours) installing the software.
The installation went smoothly and took all of 2 minutes but license activation took 3.5 hours, a chat session with customer support and many unfruitful downloads and installs, several searches and more time wasted checking out windows firewall and router settings. The problem as it turned out is poor documentation on Acronis part. My wasted time could have been avoided if I know the following information (or was told this information when I contact customer service):
1. Purchaser is given a partial serial "number" needed to activate license(s). He must: Create an account with Acronis; Register his partial serial number. A complete serial number will be displayed in his account and emailed to him. This is what he must enter into the activation window.
2. My purchased version (True Image 2017) has a bug that prevented the whole serial number to be typed in.

I downloaded the patch to fix issue #2 explained above, install the software and activate it without any issue.

I had been using it for a few days and I'm happy with its performance. The tool interface is simple, intuitive and I have no problem. I find it working as advertised.
Read more
26 people found this helpful
Helpful
Comment Report abuse

SMD
1.0 out of 5 stars Too Intrusive for Simple Backup Software
Reviewed in the United States on March 20, 2017
Size: 1 ComputerVerified Purchase
The CD installation doesn’t work. Got all the way through the process and then died saying something about not being able to create shortcuts – yes I ran as administrator. Ended up having to download the “trial” version from their website, installed that and then used the serial number in the retail package to activate the license.

Forces you to give them your email address and create an Acronis account in order to activate the license you purchased. Quit being so “clingy” Acronis. I’m just looking for backup software – not a relationship.

Your first opportunity to “opt out” of their “Customer Experience Program” only comes after you’ve installed the software, run it and accessed the “Settings” screen – giving Acronis ample time to grab any information they want off of your system and transfer it back to their servers before you have the opportunity to stop them.
Read more
75 people found this helpful
Helpful
Comment Report abuse
See all reviews

Page 1 of 1 Start overPage 1 of 1
This shopping feature will continue to load items when the Enter key is pressed. In order to navigate out of this carousel please use your heading shortcut key to navigate to the next or previous heading.
Back
Next
Pages with related products. See and discover other items: Explore prime boxes for members