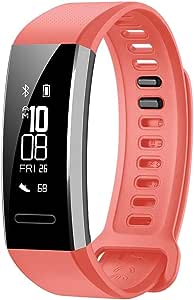 Brand: HUAWEI
3.9 out of 5 stars 50 ratings
| 30 answered questions
Currently unavailable.
We don't know when or if this item will be back in stock.

Huawei band 2 Pro is a 50 M water-resistant band that serves as a Heart rate sensor, a GPS positioning device, a fitness tracker, a sleep monitor, and a message notification device. It is the ideal companion for your smartphone. Once paired with your smartphone, the band provides you with valuable health-related information.

3.9 out of 5 stars
3.9 out of 5
50 global ratings
How are ratings calculated?
To calculate the overall star rating and percentage breakdown by star, we don’t use a simple average. Instead, our system considers things like how recent a review is and if the reviewer bought the item on Amazon. It also analyzes reviews to verify trustworthiness.

mtnbikegrl
3.0 out of 5 stars Not bad for price but could use some updates
Reviewed in the United States on October 16, 2017
Color: RedVerified Purchase
I've had the band 2 for several weeks now, I like it but there are a lot of things I wish it did better. For the price I had to try it out since the other name brands aren't waterproof. Has a lot of cool features but also limited as well. I had a Jawbone tracker that I really liked but wanted a tracker with a display. I got a knock off for $30 that read my text messages in full but the app was terrible, no heart rate monitor and tracking was not accurate.
The huawei health app is easy to use but the jawbone UP app is much better with more options and would know when you were doing an activity automatically, luckily you can link this band to UP but its not as intuitive as it is with a jawbone tracker. I was nervous ordering the red band because the pictures look more of a coral color. I was pleased that it looked exactly like the pictures because I'm not a fan of bright red. It's definitely more pink than red.
Cons: Doesn't have find your phone function. If you hit the button to quick you have to cycle through all the options to get back to the screen you want. The sleep tracking is not completely accurate but close. Sometimes it doesn't register that I was awake even when I got out of bed to use the bathroom. It thought I was sleeping one night when I was watching tv and there's no way to edit it so the whole analysis was wrong. I don't like that you can't log other exercises besides running, cycling and swimming. I linked it with the jawbone up app that allows you to log more exercises, but it doesn't always sync correctly. It's not convenient to charge since you need to use the adapter but it does give you plenty of warning that you need to charge it. I also don't like that it doesn't read an entire text message if its long, and if you receive another text before you read it on your phone it only tells you there are 2 messages. The cheap one I had before would let you read each text.
Not sure how accurate the heart rate is though, I haven't been able to test it against anything else yet.

Pros: Waterproof! However it does tend to flip through the menus when showering and sometimes even activates an activity. I really like the gps, I don't run but I used it for a bike ride and I like that it shows a map of the route. I used it for about an hour and still had a few days of use before I needed to charge it. Through the app you can also choose walking but not through the watch itself, wish you could add that on to the watch. I have a very small wrist and I still have one open slot. Its very light and comfortable. I've only had it unsnap 2 or 3 times when it got caught on something but the loop strap kept it from falling off. I haven't found trouble reading the screen in the sunlight, its dim but I can still read it.

BananaMcGee
1.0 out of 5 stars Quality control not there: You might get the advertised features, or you might not!
Reviewed in the United States on February 20, 2018
Color: RedVerified Purchase
I researched activity trackers and ordered the Huawei Band 2 Pro because it advertised the functions I wanted: automatic sleep monitor, automatic heart rate monitor, and text message or SMS message notifications, in addition to a step counter.
When I received the band I was disappointed that the text message notices was not on it. I adjusted settings, read numerous “how-to” guides, and finally called Huawei customer service. I was over an hour on the phone, and during that time I was put on hold numerous times for the tech to check for answers. He finally came back and told me simply that my tracker did not have that function. That Amazon had put that on the website and that Huawei was not responsible.

I contacted Amazon, and they sent me a replacement. The replacement also did not receive text message notifications, but it did have features the first one did not have. It offers “indoor run” for treadmills. I have downloaded updates on the first one and this feature is not there, but clearly it works great on the replacement model.

I fielded a few questions about the Huawei Band 2 Pro and found that different people report different working functions. Some do have the text message notification feature, and some do not. That is an important feature to me, but sadly, two out of two trackers I received have not had this feature. Both do give phone call notifications, but that’s it regarding notifications.

I tried wearing both bands and did find some discrepancies: the two bands recorded a different number of steps and different hours of sleep were monitored. So, obviously, this tracker is not 100% accurate. I think it’s pretty close though, and the features that do work are pretty good.

Huawei seems to be lacking in quality control, and pushed to get this device, the Huawei Band 2 Pro, on the market before working the bugs out.
Read more
11 people found this helpful
Helpful
Comment Report abuse

Dorothy L.
5.0 out of 5 stars Great Value!
Reviewed in the United States on August 26, 2018
Color: RedVerified Purchase
This activity tracker is the best value. Battery charge last a very long time (I charge mine about every 3 days and wear it all the time). It charges quickly...in minutes not hours. And it has as many features as some much more expensive trackers.
Read more
Helpful
Comment Report abuse

Amazon Customer
4.0 out of 5 stars Good motivation
Reviewed in the United States on July 2, 2018
Color: RedVerified Purchase
Thia tracker includes everything I need: HR monitor, waterproof for swimming, and step counter. The app is easy to use.
One disappointing issue is that I must reconnect to Bluetooth frequently and if I forget to check, I wonder how accurate the information is.
Overall, It’s a good training tool.
Read more
Helpful
Comment Report abuse

Sarah Diaz
4.0 out of 5 stars Great low priced product
Reviewed in the United States on June 23, 2018
Color: RedVerified Purchase
I wanted a fitness watch, this one is perfect. I didn't know that it could also double as a watch phone on bluetooth until it started vibrating when my phone rang - bonus!
Read more
Helpful
Comment Report abuse

Page 1 of 1 Start overPage 1 of 1
This shopping feature will continue to load items when the Enter key is pressed. In order to navigate out of this carousel please use your heading shortcut key to navigate to the next or previous heading.
Back
Next
Pages with related products. See and discover other items: Explore smart watches for swimmers, Explore waterproof tvs for bathroom